Home Features Should Christians Be Doormats? 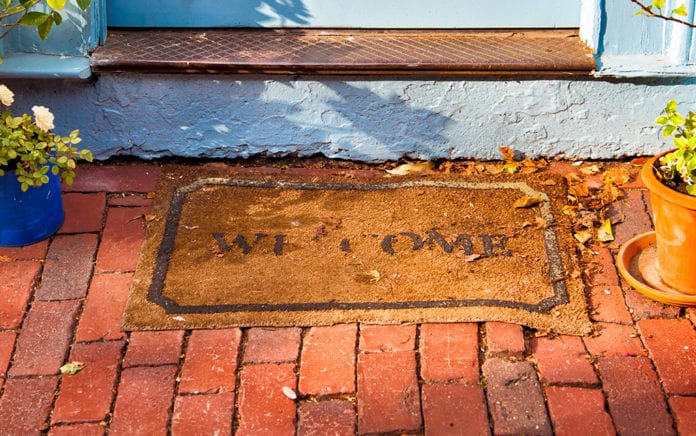 How do we interpret Jesus’ command to ‘turn the other cheek’ and ‘go the extra mile’?

After Leo Tolstoy read the Sermon on the Mount, he came to this conclusion: “It became evident to me that Christ forbids all human institutions of justice, and that he could mean nothing else. … When I understood the commandment, ‘Do not resist evil,’ in its true meaning, was that human courts were not only contrary to this commandment, but in direct opposition to the whole doctrine of Christ.”

Tolstoy didn’t think a Christian should be involved in the military, police force or courts of law. But he was wrong. He misunderstood what these teachings were saying.

The Sermon on the Mount was not given to govern a society. You govern a society by what Jesus taught in Matthew 5:38: “You have heard that it was said, ‘An eye for an eye, and a tooth for a tooth.’” This comes from Exodus 21 and continues, “Hand for hand, foot for foot, burn for burn, wound for wound, stripe for stripe” (v. 24). This was the Hebrew civic justice system, and Deut. 19:20 gives its purpose: “Then the rest of the people will hear about it and be afraid to do such an evil thing.”

Criminals don’t love good and hate evil. All people have sinful hearts and are drawn in the wrong direction. If a heart changes, that is fantastic. But when someone breaks the law, there has to be a punishment. That punishment is never to be carried out by the victim of a crime but by the legal system.

We as a nation need law enforcement and the military. Government, as an entity, has been established by God. Romans 13 tells us, “Everyone must submit to governing authorities. For all authority comes from God, and those in positions of authority have been placed there by God. So anyone who rebels against authority is rebelling against what God has instituted, and they will be punished” (vv. 1–2).

I have a friend in law enforcement, and sometimes we meet for coffee. It’s funny how people react when he’s dressed in his uniform. Everyone gets a little nervous. Why? When he puts that uniform on, it changes the dynamic of a room, because he’s an authority figure who has been placed there by God.

What if an officer isn’t a Christian? He or she is still placed there by God. Speaking of the military, police and those who enforce laws, Romans 13 continues, “The authorities are God’s servants, sent for your good. But if you are doing wrong, of course you should be afraid, for they have the power to punish you. They are God’s servants, sent for the very purpose of punishing those who do what is wrong” (v. 4).

Keep in mind that when Paul wrote these words, the authorities were the Roman government. Caesar was hardly what I would call a model of virtue. Still, Paul said the authorities have their place.

In fact, it’s interesting that Paul actually used a soldier as a model of what it is to be a Christian. Paul spent a lot of time with soldiers, because he got arrested a lot. On some occasions he was chained to them. He knew all about their armor, because in Ephesians 6 he wrote about the shield of faith, the breastplate of righteousness, the helmet of salvation and so forth. He knew how that Roman armor worked and what its purpose was.

Paul used the idea of the military and how we should follow Jesus, writing in 2 Timothy 2:3–4: “Endure suffering along with me, as a good soldier of Christ Jesus. Soldiers don’t get tied up in the affairs of civilian life, for then they cannot please the officer who enlisted them.”

God would never choose a dishonorable profession as an illustration for the Christian life. He wouldn’t say, “Be clever like a thief” or “Be passionate like a murderer.” That is the wrong picture. But the Bible does use the occupation of the soldier as a positive illustration.

However, what if the nation is corrupt? What if the authorities are corrupt? That does happen. We have a higher principle that we obey. For example, the apostles were told by the authorities to no longer preach the gospel. What did they do? They went out and preached the gospel. They said, “We must obey God rather than any human authority” (Acts 5:29).

From Outreach Magazine  Leading When Your Vision and Direction Are Unclear

But the Jesus of the Bible also administered justice. He made a whip and drove the moneychangers out of the temple. He told His disciples that as the days were getting more dangerous, they may need their swords (see Luke 22:36–38). It’s called self-defense. A Christian can defend himself or herself. It’s also acceptable for a nation to defend itself from those who want to harm it.

There is a place for self-defense. You have your rights as an American citizen. God has the military and the police force. With that in mind, what did Jesus mean when he said, “But whoever slaps you on your right cheek, turn the other to him also. … And whoever compels you to go one mile, go with him two” (Matt. 5:39, 41)?

Jesus was giving specific advice for when Christians are persecuted. These are not mechanical rules; they are principles for meeting the personal wrongs that come to those who follow him. There are times that, for the sake of God’s kingdom and the soul of a person, we take the hit or turn the other cheek or go the extra mile.

Is that an easy thing to do? No. We have all been wronged in life. Most of us have been slandered, mistreated, ripped off and taken advantage of. Jesus is not saying that we should be the doormats for the planet. But this selflessness, this love that Jesus calls for, is found in many of the people whom God has used throughout history. It’s the spirit that every one of God’s children should have. May God help us to turn the other cheek and go the extra mile.

This article appeared on Greg’s blog.