Home Features Soulfires: The Girl With the Wallpaper Skin 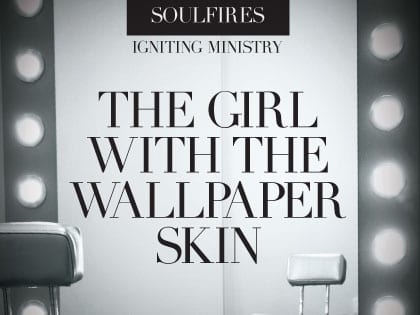 “Close your eyes,” Loli said as she began applying the makeup. As soon as Aurora’s eyes closed, Loli began to pray for her.

Loli Romo was waiting for her next appointment to show up when she suddenly realized there was a large gap in her schedule. Her chair is routinely filled up for five hours straight. Ladies young and old come to Loli to have their makeup done to perfection for the prom or a big date or a ball. On this day, however, there were three back-to-back cancellations.

Loli, colorful and eclectic, leads a Bible study on Monday nights for women called Daughters of the King. She thought that perhaps she could use this newly created free time to prepare for the next one.

Just then, her assistant appeared at Loli’s chair. “There’s a walk-in,” she said. “Would you like to take her?”

Loli peered around the corner. The girl looked to be around 13 years old. Loli didn’t like putting makeup on girls that young. As she looked out of the window, she saw an elderly man hurry away. He had dropped the young girl off.  She looked back at the girl. She stood there alone. Loli thought about it for a moment.

“Show her back,” she told her assistant.

“This is Aurora,” her assistant said as she walked Aurora toward Loli’s chair.

“OK,” Aurora said stiffly, her demeanor downcast. As she sat, Loli noticed something peculiar about her skin. Little tiny lines, almost like scars, covered her from her face to her ears to her chest on down to her arms to the end of her fingertips to her legs and toes, perfectly spaced apart, all the same length—about a half-inch. She looked like she was covered in wallpaper.

That is the most peculiar skin condition I’ve ever seen, Loli thought to herself.

“Close your eyes,” Loli said as she began applying the makeup. As soon as Aurora’s eyes closed, Loli began to pray for her. It is something she does with everyone who sits in her chair.

She tried to engage Aurora in small talk about dresses, fashion, colors, shoes—all the things that most girls her age are into. Nothing worked. Aurora was nearly completely unresponsive. She tipped her head down and looked toward the floor. Loli had worked with downcast girls before, those with so little self-confidence that they couldn’t even look her in the eye. Aurora’s tendency to look down was like nothing Loli had seen before. Time after time she would put her finger underneath Aurora’s chin and lift it so she could see her face. It never stayed that way longer than a couple of seconds.

All of a sudden, Aurora grabbed Loli by the leg about the thigh. “Can you help me?”

“Can you help me?” she asked again.

“No!” Aurora said, looking intensely into Loli’s eyes. “Can you help me?”

“I don’t know what you’re talking about, but I will certainly try to help you. What is it that you need?”

Loli scribbled down her number on a piece of paper and, even though she was a bit shell shocked by the outburst, went back to work on her face.

From Outreach Magazine  Aaron Menikoff: Shepherding in the Fruit of the Spirit

Finally, Aurora’s makeup was done. “How does it look?” Loli asked.

“Fine,” she replied, never even looking in the mirror.

“Well, you’re very beautiful. Even without the makeup!”

Aurora handed her the money from her front pocket and walked out the door.

Loli waited for Aurora’s phone call but didn’t hear from her. Secretly she hoped that whatever it was she needed help with, she was able to find with someone else. Or better yet, perhaps the problem just went away.

The rest of Loli’s day was slammed. Her schedule for the week was filled with her regular clients; makeup jobs for advertising, film and TV productions all over Los Angeles and San Diego. She taught makeup classes that were always full of young ladies wanting to learn from the best. She even met a woman named Sarah who rescues girls taken from the sex trafficking trade and rehabilitates them. Loli offered herself as a resource if the girls, in pursuit of a new life, also wanted a new look. It didn’t phase her a bit that she was opening herself up to an even more demanding schedule.

“Is this Loli the makeup artist?” said the young, female voice on the other end.

“You said you would help me.”

Loli sat confused for a moment. Then she recognized the voice.

“To the degree that I can. I don’t even know what the problem is.”

“Aurora, tell me what the problem is.”

Loli took down the information and told Aurora she would be there. After a few moments, however, she began to have misgivings. It’s a rough part of town. What if this is a trick? she thought to herself.

She quickly called two girlfriends, one of them a corrections officer, and they both agreed to go with her. With two street names on a piece of paper, the three of them ventured out to see where they intersected. Aurora would be waiting at the gas station on the corner.

“Is that her?” one of her friends yelled out as she pointed to a young girl standing alone on the corner. Loli drove up. Aurora grabbed the handle, swung the door open and dashed in the front seat.

Loli quickly looked around to see if there was anybody coming after her. She didn’t see anybody.

“Can you just drive, please?” Aurora pushed. Loli shoved the car in drive and sped around the block, found some place to pull into and stopped the car. “I’m sorry, Aurora. We’re not going any further until you answer some questions.”

“No! He said you were going to help.”

Loli looked at her for a moment. “Who in the world are you talking about?”

“You’re his daughter. Hello? You don’t know him?”

Dumbfounded, Loli just stared back at Aurora trying to use the moments to figure out what was going on.

“Yes. He is real. But how did you know I’m his daughter?”

“When I was in your makeup chair, I saw the tattoo on your foot. It said you were the Daughter of the King. I couldn’t read it at first because your shoe and the hem of your pants were in the way. But when I finally read it, that’s when I knew. God’s the King, right? And you’re his daughter.”

Loli looked down at her tattoo that did indeed say Daughter of the King after the name of the Bible study she led.

“Yes, yes I am a daughter of the King,” she exclaimed, breaking into tears. “I’ll help you. Just tell me what you need.”

Aurora began to reveal her story. The man who brought her into the makeup studio was her “grandfather,” and he had been selling her as a prostitute since she was 3 years old. The little lines on her skin were actually scars created by a john who had purchased Aurora many times over the years and got pleasure from inflicting little razor slits in her skin. The night before Aurora met Loli, she had barricaded herself in her room and was planning to commit suicide. She cried out to Buddha, Allah, Confucius and said, “Somebody’s got to be real!” But nobody answered. Finally, when she called out to the God she had heard about as a little girl, she heard a voice say, “Just hold on one more day. Wait for me. My little daughter is coming for you.”

All the women in the car burst into tears. “That day I was brought in to see you, I was being made up for a man who purchased me for the night and requested that I be in heavy makeup. This is my life. Is there anything you can do to help me?”

Loli was at a loss. God, why did you bring this girl to me? she thought to herself.

She spoke Scripture over Aurora and then the two hugged and cried, and Loli began to pray. Suddenly it occurred to her the glorious perfection of God’s plan. The reason she met Sarah earlier in the week was exactly for this moment. “I know how to help you, Aurora!” she exclaimed.

She called Sarah, and the unmistakable hand of God revealed itself in Sarah’s first words. ”Just stay where you are. We’ll come and get her and do everything from here. We’ll get her out of her life and give her a new one.”

It happened just as Sarah said. She took Aurora and spoke the Word of God into her as she set her on a course for a new life.

Sarah sends Loli biannual reports on Aurora, and her progress is remarkable. Having never gone to school before her life with Sarah, Aurora has completed junior high, high school and is nearing college graduation. She has soaked up education, but that is not all. She loves the God of the Bible, who not only sent his Son, but in this case, also sent his daughter.

Permission and courtesy of Rock Church, one of the largest churches in the U.S. with a weekly attendance of over 15,000 people in three locations in San Diego County  It is home to over 140 outreach ministries. © 2014 Rock Church