Talk is cheap, according to some people. For them, how we live out our faith matters more than what we say. While it’s true that we should show Christ’s love in all we do, let’s not diminish the importance of our words in creating a culture of outreach.

A Culture of Convenience

I was at a conference a few years ago, and a staff member from a large church approached me with questions about multisite ministry. They had recently launched new locations after extensive research. They developed a strategic plan based on drive times and precisely located campuses in a perimeter around the city. Though people showed up at the new locations, the evangelistic temperature was different than their original location. The new campuses just weren’t as passionate about reaching lost people.

This staffer asked, “Have you ever experienced something like that? Do you have any advice?”

I wondered how they had cast vision for these locations. “What did you tell your church?”

“We told them the new locations would be closer to where they live, so they wouldn’t have to drive as far. It would be an easier option for them to get to church.”

Then I shared something we’ve observed over the years: Lazy people don’t need vision to be lazy. They’ll find the path of least resistance on their own.

With the approach used to promote the new locations, this church managed to draw the people out of their congregation who were mostly concerned about convenience. Instead, what the leaders really wanted was to find the people in their congregation who were excited about getting in on the ground floor of a big missional opportunity. They needed the people who would happily drive across town to reach this part of the city.

It all went back to the words the leaders used. Because they framed the new campuses as something that would make church easier, they shaped the DNA there toward a culture of being served instead of serving.

It’s a great reminder for all of us in ministry. When we’re casting vision for new opportunities, what kind of vocabulary are we using? Sometimes the words we say to entice people to get involved can unintentionally drive us further away from our goals. We might find ourselves with a culture of inward convenience instead of outward focus.

If a ministry in our church has lost, or maybe even never had, a culture of outreach, it’s wise to take a look at our leadership language. That’s the situation we found ourselves in at LifeChurch.tv when we saw a noticeable decline in a previously thriving location.

For many years, this fast-growing campus was vibrant and healthy. When growth began to slow, we examined lots of factors. Are there problems with the facility? Are there issues with the staff? Over time we made changes in the team and improvements to the building, but none of them sparked growth. We continued to dig. Are the demographics in the community changing? Are fewer people living there?

We concluded that the culture at this location had grown inwardly focused. They cared most about what their experience was like and whether it was comfortable for them. The culture had changed enough that it didn’t match the evangelism culture at our other campuses.

We knew there must be something about the way we were leading that was creating this problem. What we realized is that we were making too many assumptions with our language.

Our words were inward leaning, and they didn’t reflect our mission. We were inadvertently using phrases like, “As you guys know, every year at this time we …” or “Wasn’t last week great?” or sharing inside jokes about our pastor. Subtle yet significant assumptions like these can alienate people who are new and create a mindset that we aren’t reaching new people.

Leading with a vision vocabulary means leveraging our words to shift perceptions and shine light on new possibilities. At our struggling campus, we began to adjust our vocabulary so the things we talk about are outwardly focused.

We evaluated everything we were saying from stage, from our worship leaders to our staff. Is our emphasis on the internal activities of church or are we out in the community reaching others?  Are we using language that assumes people know about our church and have been there before? We shifted our language to explain things, both to help new people and to remind everyone that we want new people there every week.

The culture at this campus didn’t change overnight, and it won’t change back overnight. It’s taking time and continued, intentional effort. We’re thankful to see growth emerging, and recently we even added a service.

I often hear people say our actions speak louder than our words. Actually, I think what we say plays a huge role in reaching people. Of course actions matter, but they don’t stand alone. The church I mentioned earlier took the action of opening new locations, but it wasn’t enough. Our LifeChurch.tv team took the action of changing our staffing and facility, but that didn’t produce results. Vocabulary was the missing piece in these leadership struggles.

Words matter when it comes to outreach. We have far more to offer than ease and convenience. The church has the best mission in the world. We get to help people connect with meaningful experiences and true purpose, the richness of life we can only experience through Christ. Wherever we can, we should be pointing to that as we lead our churches toward the future. 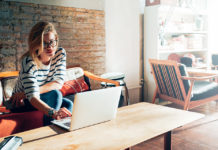 How to Sort Fact From Fiction on the Internet