The realization that they can accomplish more by working together and have an important role in training leaders has influenced how megachurches function today as well. Bird, who directs research for Leadership Network, says back in the 1970s, a Baptist pastor might balk at the notion of sharing ideas with a Methodist one. Now it’s commonplace, he says.

“It’s far less one-on-one as it was 20 years ago, and much more group-oriented,” Bird adds.

Osborne says networking is huge among emerging megachurches. They brainstorm and learn from one another.

“Twenty to 25 years ago, megachurches tended to keep pretty much to themselves,” he says. “What happened is they got in the same room together and said, ‘You know, I kind of like you. God’s done some good stuff in your church.’”

Yet while early megachurch conferences tended to be about “come and be like us,” now there is a greater emphasis on variety, Osborne adds.

As the multisite trend mushrooms, training new pastors is in demand. Mars Hill Church, for one, oversees the pastoral development program “Resurgence.” Holcomb, its director, says it includes a one-year master’s program, publishing line, internships, conferences, a training center, and tons of free Web content, such as blogs, tutorials, videos and podcasts.

Holcomb says it’s not enough for megachurches to simply spread the Gospel message. Today they’ve embraced their role to train leaders to plant churches as well, he says.

The Resurgence website averages more than 20,000 hits daily, about 2,000 people attend its conferences, and the school attracts about 100 students a year, he says.

Bird says the emphasis on and passion for networking and leadership development is a positive change.

From Outreach Magazine  12 Characteristics of People Who Are Spiritually Mature

“That willingness to learn across the board is definitely a piece of today’s collaborative environment,” he says. “Every time Jesus brought someone to faith, he used a different approach. Likewise, megachurches realize there are a lot of biblically valid ways to reach people for Christ.” 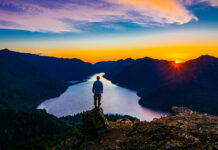