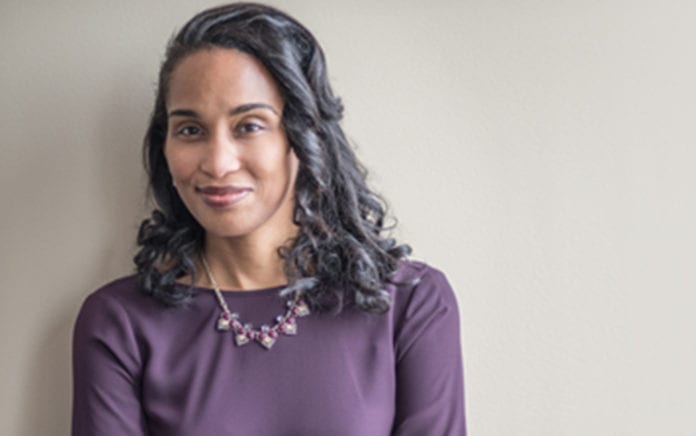 Living through the trauma of September 11, 2001, a few blocks from the World Trade Center, was a turning point for my faith and vocation.

A decade and a half before Outreach magazine contributing editor Michelle Sanchez began serving as executive minister of Make and Deepen Disciples for the Evangelical Covenant Church, she worked on Wall Street at Goldman Sachs, one of the most prestigious investment banks in America. She was at her desk on September 11, 2001, when two planes rammed into the World Trade Center a few blocks away.

The very first thing I remember were papers falling, showering from the sky. I was on the 17th floor of the Goldman Sachs building, 85 Broad Street, in the financial district in lower Manhattan.

I had studied international business in college, and after graduating I started working for Goldman Sachs as a financial analyst. The whole month of August was training, which took place in the North Tower of the World Trade Center on the top floor. If the attack had happened a couple weeks earlier, I would not be here.

September 11, 2001, was my second actual day of work. I had probably been at my desk half an hour when paper started to rain from the sky—as if a Xerox machine had blown up.

Nobody knew what was going on, so we kept working.

And then somebody said, “A plane crashed into the World Trade Center!”

There had been other accidents at the World Trade Center, so we were saying, “Oh no, that’s terrible!” But we just thought it was some kind of accident, and not necessarily devastating.

Then people stopped working and turned on the TVs, and we saw how serious it was. But still, everybody thought it was an accident.

The panic didn’t start until the second plane hit. Then there was massive anxiety, terrible panic. At some point the phones stopped working, and we couldn’t reach anyone.

I don’t remember hearing anything. It was just the rain of papers. And then the sky turned dark gray. I remember thinking about the thousands of people who had just lost their lives.

People react to trauma in so many different ways. An associate in front of me kept working, although she became increasingly agitated. She was freaking out, but in this way of, “We have all this work to do.” A guy who was working for her came over and said, “So, I’m going to leave.”

Then she picked up the phone. This was before all of the lines were dead. She talked to somebody for a minute, and then hung up. She turned around and said, “My gym just closed. Can you believe my gym just closed?” People get interesting when death comes close.

After about 90 minutes, we were asked to leave. Someone had procured masks for us because we didn’t know how bad the air quality was.

When I stepped outside, everything was white. Everything was covered with ash. I mean, it was unreal. It looked like a ghost town.

And I’ll never forget the smell—a burning plastic death smell. I can smell it right now.

We were thousands of people, all just trying to get home.

One of the most pivotal moments of my life was walking home over the Brooklyn Bridge, surrounded by thousands of people, all of us terrified and afraid. Behind me, the city was up in smoke. And I was thinking, “If I had to meet God right now, I would not be ready.”

From Outreach Magazine  Beyond Equality: Restoring Dignity to Abused Women

I knew Jesus would be there to welcome me. But I think it laid bare what I would have to tell God about what I had done with my life—my vocational choices, why I was where I was.

Essentially, I think my whole life has been a struggle between following Jesus and following money. I grew up without a lot of money. I was a lower-class black girl surrounded by upper-class white people.

At the same time, I truly loved my business major. I was president of the entrepreneurship club in college. I love strategy, administration, organizational leadership. I didn’t just study business because of money, but I definitely took a job where I could make the most money in the shortest amount of time. But on that day I knew it wasn’t what I should be doing.

I grew up in what I call a half-Christian home. My mom went to church, my dad did not. I was very young when I accepted the Lord. Because my father was not a believer, and I was Daddy’s little girl, I developed a heart for the lost very early.

Being in mission for Jesus always brought me joy. That was always a theme in my life. I started a Christian club in high school with a good friend. We were in totally different crowds. But we went to the same church, and we were sold out for Jesus, so we started this group to reach our friends. I have lots of happy memories from that.

College at New York University was similar. I met my husband, Mickey, and participated in Cru, a national college campus ministry, and we did all kinds of outreach work and saw some of our best friends come to Christ.

So on September 11, I was on the bridge, and I was thinking, “Oh, God, please let nothing hit this bridge. Because I’m just going to go into that water and I’ll be dead.”

It was eerily quiet. I walked all the way home, maybe a couple of hours—in heels.

It took hours for phone lines to be functioning again. I remember when I connected with my family, feeling grateful as I assured them, “I’m okay. I’m okay.”

I also remember embracing Mickey—we were engaged then—and not wanting to leave his side. There weren’t a lot of words.

I had some traumatic aftermath, in which I met God powerfully. Within a month or so, I started wrestling with God, with the basic evil of the situation. I was raging mad at God, asking, “Where were you, God? How could you allow this to happen so indiscriminately?”

By that point, I had watched the videos of the planes many times, and we knew people were jumping to their deaths. I kept imagining having to make that choice: I’m at work. I’m having coffee. All of a sudden, I’m choosing if I’m going to burn alive or jump to my death.

It rocked me so, so deeply. I was really, really struggling. I felt a lot of pain.

At the time I was attending Redeemer Presbyterian Church, where Tim Keller was pastor. If you were having issues, you could talk with someone on the diaconate. I was on the phone, having regular conversations with someone, just to express the pain I was going through. It was mostly just praying and listening.

From Outreach Magazine  How to Mobilize Members for Ministry

Then something happened to me that felt like a supernatural intervention.

I had a dream that I was running in a forest. I was somewhere on mission for Jesus, but I was running away, because I was being pursued by someone who wanted to kill me. I was terrified. I kept thinking, “I’m going to die. I’m going to lose my life.”

And then I saw a door in midair in front of me. I knew it represented perfection. And beauty. It opened with a beautiful, warm white light shining out. And flower petals were coming out of the door.

I ran through the door just as I was about to be attacked. The door shut. And then it disappeared.

I woke up knowing two things. One, I was deeply relieved and grateful. And two, I knew that going through that door meant I had died. But I felt both of those things simultaneously with joy and gratitude.

“Okay, Jesus,” I thought. “I got the message. We’re always in your hands, no matter what.”

If you’re in mission for Jesus, all kinds of awful things will happen to you. That’s kind of how it goes. We can either be enslaved by bitterness, or we can trust God. And every evil, he will redeem. I felt like God touched me and healed me.

I had signed a two-year contract with Goldman Sachs that I was committed to finish. It was a remarkable period to be working on Wall Street. We had been stripped of all these trappings of wealth and prestige and just faced with death.

I had a number of extraordinary opportunities to share Christ with people. I reveled in that, learned all I could, and started the process of discernment about what would be next.

After two years, when I told people I was leaving for ministry, they were completely shocked. They had no idea what to do with me. It was as if I’d turned into a unicorn. I took advantage of those reactions as an opportunity for conversations.

I was going to work with Cru, and I had to raise support to do that. You better believe I followed up with people, telling them, “Here’s what I’m doing.” And they had the means to give generously. That was the beauty of it.

Michelle Sanchez is an Outreach magazine contributing editor and executive minister of Make and Deepen Disciples for the Evangelical Covenant Church. Prior to this role, Michelle served as pastor of Christian formation and mission at Highrock Church in the Boston area.  She has previously served in leadership for the Lausanne Committee for World Evangelization and worked as an investment banker for Goldman, Sachs & Co.

This article originally appeared on CovenantCompanion.com and is reposted here by permission.