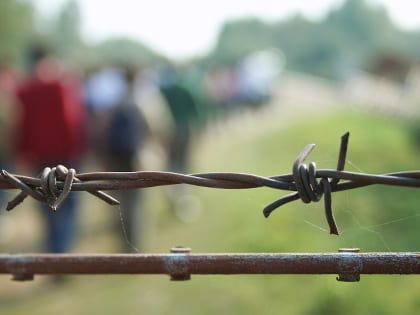 As the U.S. has been battered by successive natural disasters, displacing thousands, we have the opportunity to see the global refugee crisis with new eyes.

Never in my lifetime has the U.S. been so battered by successive natural disasters than in the past several months. First there were the monster hurricanes with benign names—Harvey, Irma, Maria—striking Texas, Florida and Puerto Rico. Then vicious wildfires scarred central California. These disasters displaced a record number of Americans, as many as 100,000 from the storms alone.

This is possibly the largest number of Americans in recent memory to experience what is sadly common around the globe—the plight of a refugee. People just like us, maybe even friends or relatives, now know what it’s like to run for their lives, lose all their possessions and find themselves at the mercy of strangers.

America has responded generously, as we always do, to aid our fellow citizens. While the government’s emergency apparatus swung into high gear, churches and charities raised millions—the One America Appeal, endorsed by five former presidents, alone raised $31 million.

Good for us. It’s heartening that we can put aside any differences and support our neighbors in their time of need.

But let me gently suggest something else that’s good for us: allowing these national crises to break down our biases and develop empathy for the world’s refugees.

Don’t get me wrong, helping Americans is important. And it’s natural to favor our own people. We tend to care more about people who are like us than those who are geographically distant and culturally different. That’s just how we’re wired.

But do we think God distinguishes between a displaced Texan and a displaced Syrian? Does God have different levels of compassion for people based on their location, their nationality or their religion?

Of course not. And that’s the challenge for Christians: We must try to see as God sees, care as he cares, and love as he loves.

God equipped us with empathy, the powerful ability to understand and care about others’ experiences. It often starts with pain, such as the untimely death of a loved one or battling cancer, but afterward you care deeply about others going through the same thing. I think there’s also a spiritual form of empathy—it’s what World Vision founder Bob Pierce meant when he famously prayed, “Let my heart be broken by the things that break the heart of God.” With the world’s suffering often so distant from us, we have to want our hearts broken. We have to work at it.

The plight of “American refugees” can help us empathize with refugees from places like Syria and South Sudan. The similarities are strong when you focus less on the cause of their displacement—‘confusing and complicated wars—and more on the human impact. Here are a few insights:

No one ever asks for trouble to befall them.

You can’t blame someone for living in the path of a hurricane—this year that would mean 2 million people in Houston, most of the state of Florida, and the entire island of Puerto Rico! Sure, you can move away from a hurricane zone, but no part of our country is immune to all disasters, and we are all equally undeserving of tragedy. Just the same, the vast majority of global refugees never wanted war to show up on their doorstep. They were just pawns in political or ethnic power games. They didn’t do anything wrong. In fact, they did the right thing for their families—by running away.

It’s emotionally upsetting to flee for your life.

Survivors of 2005’s Hurricane Katrina continue to experience psychological problems such as depression and substance abuse, and understandably, mental health professionals are worried about what’s ahead after all the recent disasters. Now imagine the trauma and stress of refugees who witnessed bloodshed and destruction. A Syrian woman I met in Lebanon told me about her son, who saw his sister shot dead in front of him and also narrowly escaped a bombing during the war. Four years later, he still shakes uncontrollably.

The most vulnerable people are most affected.

It was heart-wrenching to read about the elderly people who perished in Texas and California, and worrisome to hear that hurricanes shut down so many school districts that more than 1 million students were unable to go to class. The oldest and youngest generations always need the most help and, without special protection, are at the greatest risk in times of trouble. Health care breaks down, affecting the elderly and infirm, and education is interrupted, with potentially long-term consequences for children. Refugee camps and settlements around the world are tragically full of little children and elderly people living without the extra protection they need.

From Outreach Magazine  Why Kids and Youth Ministries Drift from Jesus

The world’s refugees are not so different from U.S. disaster survivors. They’re innocent people caught in a disastrous situation. They’re troubled and traumatized. And many of them are the defenseless young and the fragile elderly. They deserve our compassion, support and prayers just as much as our own citizens.

I challenge you to seize this moment in the wake of our disasters to look at the world’s dislocated people in the same compassionate way as we see American neighbors in need. With our biases blunted and our empathy engaged, we are better able to share God’s view of suffering—that of a brokenhearted, loving Father who sees nothing more than his children’s pain.

Richard Stearns (@richstearns) is the president of World Vision U.S. and the author of four books, including The Hole in Our Gospel and Unfinished.