Home Features 3 Ways to Live Out Your God-Given Originality 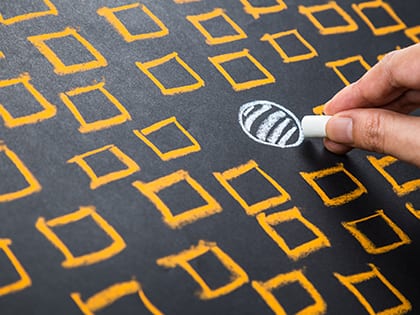 “You were made to be different, to stand apart, to be a genuine expression of the creative mind and heart of God.”

No one loves fake. To be called a “phony” is not a compliment. Even the word “bogus” sounds like an unwanted and sticky unknown “something” that should be flushed down the toilet.

But we love the words authenticity, humility and transparency. While all of these characteristics are important, I would argue that originality is even more necessary.

While living in Washington, D.C., I had the privilege of visiting a museum and seeing the original works of many famous artists: Leonardo da Vinci, Rembrandt van Rijn, Vincent Van Gogh, Claude Monet, Picasso, etc. What made these works significant was that they were “originals.” They were the authentic, genuine creations of famous creators, and they were collected and put on display for people to admire.

A few doors down, there was another giant, well-lit room filled wall to wall with artistic creations. I love Claude Monet, and many of his works were in this room for me to look at and admire. The only difference was, these were not originals, but replicas. These copies were souvenirs to collect to hang on dorm room walls and apartments, or as inspiration for aspiring artists.

Being an original puts a value on you that others admire. You can be a masterpiece or you can be mass-produced. That’s why God created you to be the you he is waiting for and the world is looking for.

The word “original” comes from a Latin word meaning “the first in time.” We could also say it this way: “one of a kind.” No one will ever be like you. Your DNA is unique. Your fingerprints belong to you and no one else. You were made to be different, to stand apart, to be a genuine expression of the creative mind and heart of God.

In a world that seems to celebrate conformity, God desires for you to resist conformity. He wants you to be yourself! Don’t be conformed to this world, but be transformed into a unique translation of God’s heart and voice in the world.

While that sounds noble and powerful, being an original isn’t as easy as we think. Stop and ask this question about the places you frequent: “Is this a safe place for me to be myself?” I think this is a question we have all asked ourselves at one time or another. It’s is a question we must ask if we are going to be the original person God has created and called us to be.

From Outreach Magazine  3 Temptations When a Church Plant Is Stable

If being an original is a good thing, then how do we discover and keep our originality?

1. BE CREATIVE: Reclaim creativity by resisting the status quo.

Sometimes, we have to violate what we know as the standard to discover a new standard. A willingness to leave the traditional creates a “new normal.” So be unconventional. Be unusual. Be unique, because God thinks you are. Check out Psalm 139:13–14: “I have been amazingly and miraculously made. Your works are miraculous, and my soul is fully aware of this.”

You are a miracle. You are amazing. You are the first good idea. From you come all the ideas that are necessary for you to be who you were meant to be, and to do what God has called you to do. Your good and bad ideas are a collective masterpiece of expressions that show the world there’s no one like you.

Adam Grant, in his book Originals: How Non-Conformists Change the World, says this: “Creativity is allowing yourself to make mistakes. Art is knowing which ones to keep.”

2. BE VULNERABLE: Openness is bravery.

I excel at putting on a great exterior. But I’m bad at letting others look “under the hood” and see the dysfunction underneath. But as I get older, I realize that being vulnerable with people is a freeing experience. That’s why trying to conform yourself according to who and what others want you to be is the exact opposite of freedom.

When we hide the undesirable parts of our lives, we build up a facade, not a foundation. Like a movie set, facades are shaky, flimsy and made of plywood and plastic. Foundations are the real thing, and when Christ is your foundation, then you have all the permission in the world to be yourself. If Christ loves us where we’re at, then we should, too (Rom. 8:38-39).

3. BE RISKY: Sometimes it takes more than one risk.

When you fail, keep trying until you become great at what you do. I would argue that failure is not trying to get back up, but quitting. Failure is saying, “This isn’t going to work,” and giving up.

Proverbs 24:16 says it like this: “The righteous may fall seven times but still get up.” Most people give up, but original people stand up—and take risks. Your commitment to see your goals through even when you fail puts you in a better position for the future. Acting now, even in the midst of fear, sets you apart. Act despite your fear, and watch God move.

Consider Shakespeare. Most of us are familiar with a small number of his classics, but many people don’t realize that in the span of two decades, he wrote 37 plays. Mozart composed over 600 pieces before his death at 35 years old, and Bach over 1,000 in his lifetime! Picasso’s creative legacy includes more than 17,800 paintings, sculptures, ceramics and drawings, not to mention prints, rugs and tapestries.

It’s not about being perfect; it’s about being willing to fail. Because the more you fail and get back up, the more successful you’ll become. Be original!

Alan Pastian is a campus pastor at River Valley Church in Apple Valley, Minnesota (an Outreach 100 church, No. 23 Fastest-Growing and No. 46 Largest). For more: AlanPastian.com