Home Features Why You Don’t Need to ‘Start’ Another Church 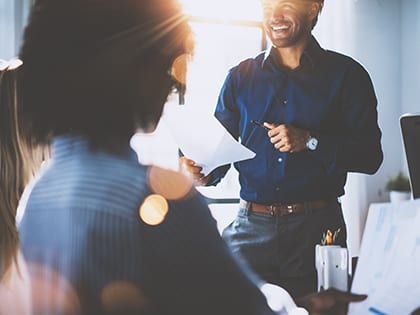 “The divine call to ‘come and see’ invites us to engage wholeheartedly in everything God intends.”

Several years ago, a small group of friends asked me to spend some time with them as they sought counsel about how they might go about “starting” a church. They had met while in college and had become passionate about God’s kingdom because they witnessed so many of their friends throwing their faith away in exchange for the lower-shelf fireballs so abundantly available on college campuses.

They wanted something more, so they began to meet with one another to share life together. They counseled each other, prayed for each other, and taught one another the Scriptures. They told more and more people about Jesus and saw many people join them in their pursuit of Christ. They discipled these new believers and continued to gather with them. Then together, they all began reaching out to even more people who did not yet know the depths of the grace Jesus was offering to them.

It didn’t take long before between forty and sixty of them were meeting together on a regular basis to encourage and equip one another. Some of them were humbly leading and shepherding others in the group, and they were asking me, “What’s next?” They had just graduated, and they wanted to be intentional about making sure the momentum they had experienced during college did not wane as they transitioned into their next season of life. After hearing their story, I said, “It sounds to me like you already are faithfully being the Church. What do you mean you want to ‘start one’?”

Seemingly confused, they replied, “No, we mean we want to know what it would take for us to be ready to meet on Sunday mornings.” Now I understood what they wanted from me. They thought the last step to legitimizing their group as a church required a change in time and place—specifically to gather on Sunday mornings.

It is true that from the beginning, the first disciples gathered together not on Saturday, the traditional Hebrew Sabbath, but rather on Sunday, the first day of the week. This was an early distinctive of the Way (as Christians were often called during the first century). They started their week together on Sunday as a way of saying to themselves and to those around them that everything had changed because of the world-altering event that had happened on another Sunday: Christ’s resurrection.

Sunday was their day to gather and to collectively remind themselves of God’s kindness in giving His Son. They wanted to remember that they didn’t have to work to attain His favor but could rest in the hope of the Messiah who had delivered them from the oppression of sin and self—and the destruction that followed. It is finished, so they celebrated that they could know God intimately and not just as some vague idea because, as John said, “we have beheld His glory.” He walked in their flesh and paid their debt. He was raised from the dead, so they were no longer dead in their transgressions but were alive in Christ. Sin had lost its sting, and death had lost its victory.

From Outreach Magazine  Scot McKnight: A Church Culture of Goodness

You see, reminding ourselves and encouraging one another with these life-changing realities of grace is the real job of the Church “gathered.”

As pastorally as I could, I told these passionate young men, “Don’t you dare tell your people that you’re going to ‘start’ a church.” The look of continuing and increasing perplexity on their faces asked me the inaudible question of their hearts: But why?

So I answered without hearing their question. “Don’t reinforce an idea that is causing the Church of Jesus Christ to be useless in this generation. Don’t say you are ‘starting a church’ just because you are changing when or where you gather. Based off of what you have told me, you already are a church.”

Jesus told the woman at the well that the time is coming and is now here when the true worshippers of God will not base their worship experience on certain locations, rituals, or times of gathering. We weren’t at a well, but my goal was the same. I did my best to explain to them what I will now do my best to explain to you—the real reasons why the Church should gather.

A Deal You Don’t Want to Make

I recently shared a meal with several friends who, like me, happened to be pastors in the Dallas area. One of them proposed a gathering—a solemn assembly, if you will—where we would call other pastors and church leaders from across the nation to join us in challenging people to deepen their spiritual walks by moving forward beyond mere membership and into true discipleship. Now
I know these labels and terms mean many different things to many different people, but from my understanding of Scripture and what the Bible clearly calls all believers to be, I had to speak up because I saw two big problems.

First of all, they were not addressing the fact that too many churches are simply allowing “believers” to attend Sunday services without being attentive to the call of Christ on their lives every hour of their week. This has become commonplace and normal. Secondly, they were implying that many churches—maybe even theirs—had “members” who were not actually disciples. I told them that moving most “churched” people from membership to discipleship was avoiding the bigger problem with the American Church throughout our history: the constant consuming of religious services without responding to Christ’s call on one’s life.

What most people in church really need—and I mean people who think of themselves as believers, not guests or those exploring the faith—is not a move from membership to discipleship, but rather a drastic move from attendance to membership.

In both the Old Testament and the New Testament, some of the strongest admonitions and warnings in Scripture are given to those who hold “to a form of godliness, although they have denied its power.” Don’t just take my word for it; listen to what Amos and Isaiah have to say about it.

“I hate, I reject your festivals, nor do I delight in your solemn assemblies. Even though you offer up to Me burnt offerings and your grain offerings, I will not accept them … Take away from Me the noise of your songs; I will not even listen to the sound of your harps. But let justice roll down like waters and righteousness like an ever-flowing stream.” (Amos 5:21–24)

From Outreach Magazine  When Bible Reading Doesn't Go According to Plan

“‘What are your multiplied sacrifices to Me?’ says the LORD. ‘I have had enough of burnt offerings of rams … When you come to appear before Me, who requires of you this trampling of My courts? Bring your worthless offerings no longer … I cannot endure iniquity and the solemn assembly … They have become a burden to Me; I am weary of bearing them.’” (Isa. 1:11–16)

And if Isaiah and Amos aren’t enough, just listen to Jesus.

“You hypocrites! Isaiah was right when he prophesied about you, for he wrote, ‘These people honor me with their lips, but their hearts are far from me. Their worship is a farce, for they teach man-made ideas as commands from God.’ For you ignore God’s law and substitute your own tradition … You skillfully sidestep God’s law in order to hold on to your own tradition.” (Mark 7:6–9)

What kind of worship would Jesus consider to be in vain or even a farce? It begins with what I call “The Deal.” The Deal is the mostly unspoken arrangement that many modern church leaders have made with modern church “members” (and remember, I am using the term “members” loosely).

Basically, The Deal goes like this: members agree to validate pastors and leaders by showing up fairly regularly and agreeing to pay enough offerings to keep the lights on and keep the weekly activity of the church operational. In return, “pastors” agree to preach civil, encouraging, self-help life messages, never asking too much of those attending.

And they both tell each other that they are doing what God wants them to do.

I say all this not to sound judgmental or to indict any church in particular. In fact, if your first inclination is to think of someone else in your life who seemingly lives under The Deal, I challenge you to put them out of your mind, at least for now. In this moment, I want to ask you to examine someone much closer to the subject: yourself.

Whether pastor or attender, are you cutting that deal?

What is the unspoken (or spoken) arrangement you have with church? Do you think the way you view “church” is in alignment with the way God views His bride as described in Scripture? There is no condemnation here—I promise that by God’s grace, these are questions I am always asking myself … and you should absolutely be asking yourself, too, for within the answers lie more than models of various church systems or questions of relevance in style or delivery. The most important reason you should ask these questions about the Church is that you are actually supposed to be the Church.

So what exactly does “being the Church” mean?