Home Features Does Jeremiah 29:11 Apply to You? 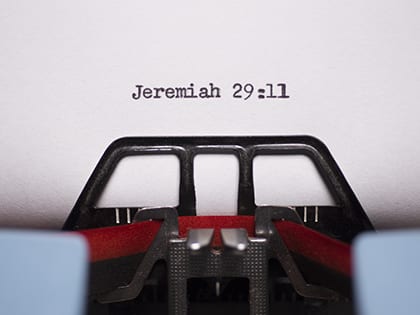 “My answer: Kind of. Let me take that back: Yes, it does apply to you, but not in the way many ‘claim’ the passage.”

“For I know the plans I have for you, declares the Lord, plans for welfare and not for evil, to give you a future and a hope.”

These words are the John 3:16 of American cultural Christianity. Watch how often they show up on the Bible verse plaques sold in Bible-Belt mall kiosks or posted on Facebook walls, or even on tattoos. Whether as home decor or on social media posts, I see this passage claimed fervently by people I know haven’t been in a church service since the first Bush administration.

Naturally, this love for this verse has often led to more theologically-oriented Christians lamenting the out-of-context use of Jeremiah 29:11. So much so that a young Christian asked me recently, “Does Jeremiah 29:11 apply to me, or not?”

My answer: Kind of.

Let me take that back: Yes, it does apply to you, but not in the way many “claim” the passage.

Many understand the text to be about God’s favor on one’s life and on one’s plans. If I just have confidence and follow my heart, someone following this line might think, God will bless me. That’s not the prophet Jeremiah; that’s Deepak Chopra. Anyone who could find that kind of moral therapeutic deism in the book of Jeremiah hasn’t read any verse of Jeremiah above or behind this verse.

The book of Jeremiah is all about God disrupting his people’s plans and upending his people’s dreams. This verse comes in the context of a shocking message from the prophet. Those “left behind” in Jerusalem—anchored around the temple and the throne—assume that their relative fortune is a sign that God is for them, while those carted off in captivity to Babylon are seen to be under God’s curse.

This isn’t actually good news for any of the hearers. The Jerusalem establishment chafes at this message, and finds prophets who will say that peace is just around the corner. For the exiles, the message isn’t a cheery one either, at least in the short term. In Jeremiah’s letter to them, they are told that their return from exile won’t happen any time in their generation, so they should create new lives in Babylon.

From Outreach Magazine  Idea Starter: Use the Right Form of Advertising to Reach Your Community

Through Jeremiah, God told the exiles that their scattering isn’t accidental. God has plans for them, plans that include even what seems chaotic and random. Moreover, these plans mean that the exile isn’t permanent. That isn’t because of their faithfulness but because of God’s promise to Abraham—a promise that was itself looking forward to Abraham’s son, the Lord Jesus (Rom. 4).

And indeed, the exiles didn’t stay scattered. God restored them to their home. Why? He brought them home because through them “according to the flesh, is the Christ, who is God over all, blessed forever” (Rom. 9:5).

Moreover, God tells us that since we are in Christ, we are strangers and exiles in this time between the times (Heb. 11:13; 1 Pet. 2:11). We suffer, we bleed, we die—and through all that we are tempted to think that this means that God has abandoned us. We conclude that we are “as sheep to be slaughtered” (Rom. 8:36). Not so, the gospel tells us.

God has a plan for us, in Christ. That plan is not for our destruction but for our well-being. We are being conformed to the image of Christ—by sharing in his suffering—and our ultimate end is not as victims but as victors, as joint heirs with Christ (Rom. 8:12–39).

How do we know this? We know it the way the exiles of old did: not by observing our present condition but by the Word of God, his oath and his covenant. That means that our plans may evaporate. Our dreams may be crushed. Our lives might be snuffed out. But the God who raised Jesus from the dead will raise us up with him.

Does Jeremiah 29:11 apply to you? If you are in Christ, you can count on it. The passage doesn’t promise you the kind of future American culture prizes, and maybe even promises a future you would tremble at it if you saw it in a crystal ball. Short term, you may suffer. But, long term, your future is co-signed with Christ. That’s a future for your welfare, and not for evil, a future of hope, not of despair.

Russell Moore is president of the Ethics & Religious Liberty Commission of the Southern Baptist Convention, a widely sought cultural commentator and author of several books including Onward: Engaging the Culture Without Losing the Gospel (B&H Books, 2015). This article was originally published on Moore’s blog at RussellMoore.com.