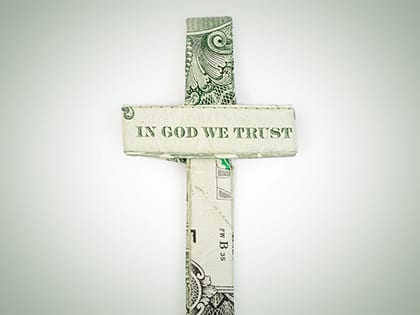 “The beautiful good news of Jesus makes the pathetic promises of the prosperity gospel pale in comparison.”

I love a good worship tune from Bethel or Hillsong as much as the next guy. I don’t even mind a bit of banner-waving or ribbon-dancing in worship (I could probably do without the tuneless shofar-blowing, though). And I certainly believe in the power of healing prayer and all kinds of other supernatural God-stuff.

But I’m getting a little concerned.

Folks, there’s a lot of delusion coming from certain wings of the church. There’s a lot of bad theology, celebrity chasing and “health and wealth,” “name it and claim it” teaching. Too much!

And most of this can be summed up under the label “prosperity gospel.” The prosperity gospel is a twisted form of Christianity that teaches that obedience, giving and faith are ways to get stuff from God.

Now, no one wants to admit that they have embraced the prosperity gospel, (even if it’s more of a side-hug than an embrace). There’s always a more extreme example to point to while we let ourselves off the hook.

But prosperity-teaching is sneaky. So, here for your reading pleasure are five sure-fire signs that the prosperity gospel has crept into your bed and snuggled up on the pillow beside you.

1. You can’t accept that Christians are bound to suffer.

Anyone remember the SARS epidemic? Before Zika and Ebola, there was the scary SARS outbreak, and it shut down places like Hong Kong and Singapore.

I was in Singapore at the time, and I’ll never forget the sad shockwaves that rocked the churches when a local pastor contracted SARS and died, after praying for one of his infected church members in hospital.

It’s awful to have to say this to adult Christians, but, “No, sorry, the safest place is NOT at the center of God’s will.”

The center of God’s will may, in fact, be one of the wildest, most dangerous places you could imagine. Newsflash: You could actually die following the One who went to the cross to demonstrate what love looks like. That’s what taking up your cross means.

I’ve seen that reality time and time again in my own ministry. I’ve personally had my house burgled while I was away preaching, suffered from life-threatening cancer while leading a mission organization, watched countless friends die of AIDS, and lost missionary co-workers to painful sicknesses and death.

As Paul points out quite plainly, there is a heavy, heavy cost to following Jesus:

One sure sign that you have snuggled up with the prosperity gospel is a lack of a deep theology of suffering. Simply put, can your theology deal with the reality that godly people get sick, hurt and die—even though they have faith?

The life, death and teachings of Jesus clearly demonstrate that there are no promises of safety or comfort. In fact, if we follow Jesus, we are actually more likely to suffer and be persecuted. The only guarantee we have is that God loves us and will never leave us.

2. You believe poverty is caused by a lack of faith.

I took my neighbor from a Phnom Penh, Cambodia, slum to a local Pentecostal church once. After the dancing girls with flowing ribbons and the hour-long worship was over, the preacher got up on the stage and started to shout at us. I remember wondering to myself, Why is everything so loud in these places? Is God hard of hearing? I must be getting old!

The opening illustration given by the American pastor was that of lottery winners who didn’t know they held a winning ticket. (Apparently there are a bunch of folks in the States who have won a million bucks but never checked their tickets.)

“And that, my impoverished friends,” he smiled triumphantly, “is just like you!”

Amazing news coming from a relatively rich American to a Cambodian audience.

Sadly, overcoming poverty is a little more complex than that—as anyone who has actually experienced poverty will tell you. And that’s why the prosperity gospel is a particularly vicious lie to the poor, who are led to blame themselves when the riches never flow.

3. You care more about personal prosperity than shalom.

Who doesn’t love Jeremiah 29:11? We ALL want God’s blessing—and a double helping of financial prosperity doesn’t sound too bad either!

But the word translated throughout the Old Testament as “prosperity” is actually the Hebrew word “shalom.” And as you probably already know, shalom is much deeper and more far-reaching than just having a few extra bucks in your Armani-suit pocket.

Shalom is not just peace or prosperity—but a big, beautiful vision embodying all that God desires for his creation. He wants to restore ALL things. And the prosperity and blessing God promises us in the Bible is for the shalom of the whole community, not just ourselves and our immediate family.

Yes, God blesses us financially at times. But in the biblical worldview, that blessing is for the entire community—including the poor, the orphan, the widow and the immigrant—not for you to keep stashed under your mattress for yourself.

So next time you read this verse, consider reading it like this, and imagine the amazing vision God has to restore everything and bring shalom:

4. You can’t see that the gospel is revolutionary good news for the poor.

It’s amazing to me how entire books can be written on sharing “the gospel” without mentioning God’s heart for the poor. I mean, it is right there in Jesus’ announcement at the launch of his ministry:

“The Spirit of the Lord is on me, because he has anointed me to proclaim good news to the poor. He has sent me to proclaim freedom for the prisoners and recovery of sight for the blind, to set the oppressed free…” (Luke 4:18)

We’ve done a good job of spiritualizing these verses so that they lose their political and economic implications. But the wider context of Luke’s gospel shows how misguided that is.

For example, Luke kicks off his tome with Mary’s song, a radical proclamation about the subversive nature of Jesus’ kingdom (Luke 1:46–56). Her freedom song reaches its peak with this revolutionary couplet:

“He has brought down rulers from their thrones and raised up the humble. He has filled the hungry with good things and sent the rich away with nothing.”

From Outreach Magazine  The Most Common Misunderstandings Christians Have About Sin

Luke is painting a picture of good news that will radically upset the status quo. And frankly, it won’t be easily understood as “good news” for the rich and comfortable.

Jesus’ most challenging words for those who embrace the prosperity gospel are STILL true, yet mostly ignored: “Indeed, it is easier for a camel to go through the eye of a needle than for someone who is rich to enter the kingdom of God.” (Luke 18:25).

5. You think the prophets’ main job was to predict the future, instead of to rail against injustice.

In the few churches that still recognize the role of prophets today, the focus has strayed FAR from the biblical call to justice.

These modern-day “prophets” mostly offer warm and fuzzy future predictions about what great things an individual will do in his or her ministry or career. Sadly, the call to repent for ignoring the poor or living affluent lifestyles in a world of poverty has mostly been lost.

So let’s take a quick stroll through some of the prophets’ words together and ask ourselves how often we hear these prophetic utterances in our churches:

“Behold, this was the guilt of your sister Sodom: she and her daughters had pride, excess of food, and prosperous ease, but did not aid the poor and needy.” —Ezekiel the Prophet (Ezek. 16:49)

“Hear this, you who trample the needy and destroy the poor of the land!” —Amos the Prophet (Amos 8:4)

“Woe to him who builds his house by unrighteousness, and his upper rooms by injustice.” —Jeremiah the Prophet (Jer. 22:13)

“He has told you, O man, what is good; and what does the Lord require of you but to do justice, and to love kindness, and to walk humbly with your God.” —Micah the Prophet (Mic. 6:8)

“Thus says the Lord of hosts … do not oppress the widow, the fatherless, the immigrant, or the poor.” —Zechariah the Prophet (Zech. 7:9-10)

The prosperity gospel is not good news. It’s a lie. It’s a false promise for those who are most desperate and vulnerable: the sick, the poor, the downtrodden. And it’s an evil temptation for everyone else.

Has the prosperity gospel snuck itself into your household and made itself at home in your favorite armchair (or on your bookshelf)?

You don’t have to be a devotee of Joel Osteen or Joseph Prince to be sucked in by this insidious teaching. We’re all susceptible to these subtle lies. But the gospel I see Jesus preaching is good news for the poor, not false promises or pies in the sky—or theology that only makes sense for comfortable Westerners.

And the beautiful good news of Jesus’ upside-down kingdom is so vast and incredible that it makes the pathetic promises of the prosperity gospel pale in comparison.

So, which one will you embrace?