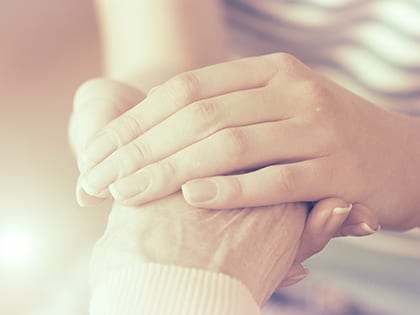 “There’s enough negative talk in the world. Be someone who is known for believing in people.”

My kindergarten teacher was Miss Zehnger. One day a classmate brought an injured pigeon in from the playground. Instead of throwing the bird out, Miss Zehnger surprised us by buying a cage for it and making it our class pet. She let us feed the bird. After a while its wing healed, and one day Miss Zehnger said, “Come outside with me. I want to show you something you’ll never forget.”

We followed as she marched outside with the cage, opened the cage door and waited. The pigeon didn’t budge. He seemed to like his new house. Miss Zehnger shook and tapped the cage, and the pigeon finally hopped forward, looked over the edge, and flew away.

Perhaps without knowing it, Miss Zehnger gave us a picture in that moment of how to be a dream releaser. Each of us can tap on people’s cages and say, “You’re meant for more than this. You can fly.”

My brother, Matthew, is a man of great power and faith, the pastor of the LA Dream Center. But it wasn’t always that way. He was a nervous kid who chewed his nails to the stubs. He was always the last kid in line because kids would push him around a little. He was passive in a lot of ways. But one day my dad looked at this little boy and said, “Matthew, you can do a lot more with your life than you think you can. I’d like you to start by playing Pop Warner football. Just see if you like it.”

The first game of the season was so boring. The score was 0 to 0 with three seconds left. Matthew’s team was on their own one-yard line. Matthew was playing the position of running back. Dad and I stood on the sidelines hoping they would down it and get a tie, rather than hand it off and get tackled in the end zone for a safety.

Instead, on the last play the quarterback pitched the ball to Matthew six yards deep in the end zone. A guy hit him in the end zone, which would have lost them the game, but Matthew broke the tackle, spun around, turned the corner, broke another tackle, and ran down the sidelines.

“Run, Matthew! Run!” Dad yelled, running down the sideline with him. I ran after them both, amazed at what I was seeing. Matthew scored the winning touchdown.

If ever there are moments that change a life, that was one of them. Matthew went on to be the state champion wrestler three years in a row, all because Dad tapped his cage and said, “You can be more than you think you can.”

From Outreach Magazine  7 Reasons to Be Thankful for Adversity

When Matthew turned seventeen, Dad tapped his cage again and said, “I think it’s time for you to pastor your first church.”

Matthew said, “Do you think I can?”

With that, Dad shipped him off to a rough neighborhood of Los Angeles to help him start the Dream Center. That amazing story is still being written. Mark Twain said, “Really great people make you feel that you, too, can become great.” That statement has proven itself time and again in my family.

In the Bible a man named Joseph had big dreams but found himself in a dungeon. While he waited for his dream to be resurrected, he asked a fellow prisoner, “Tell me your dream.” I find it amazing that Joseph had his own dream but was interested in someone else’s dream. If you’re interested only in your own dream, you’re thinking too small. Dreaming big means becoming a dream releaser—using your resources, your time, your wealth, your wisdom, and your strength to help others. You know you’re on your way to your dream when you are releasing others’ dreams.

One of our staff members has a God-sized dream, yet he asks me every day, “Pastor, what can I do for you?” It’s amazing how that makes me feel. I know he has big dreams, yet he makes my dreams his priority.

Jesus did that. He helped people see beyond what they were to what they could be. He saw Simon and changed his name to Peter. Peter was an impetuous man. He was always rushing in where angels fear to tread. He was considered unstable and unable to keep his commitments. But Jesus said, “That’s not how I see you. I see you as a rock, so I’m going to call you Peter!” Peter literally means “rock.” I want to be that way. I want to see what people can become rather than who they are. I want vision to look beyond their present reputation.

It’s a risk to believe in people. Some will prove you wrong. But anybody can believe in people after their success. The risk is to believe in them before they succeed. Tap their cages. Speak that belief. Words inspire. They encourage, which means to instill courage. Words can paint a picture of the dream before it comes to pass. Words are a catalyst for success or failure.

From Outreach Magazine  Michelle Sanchez: The Road to Missional Discipleship—Part 1

Believe in people and then take your strengths and use them to strengthen others. If you have a strong marriage, help those who need stronger marriages. If you have a college education, help those who would like one. If you have overcome an addiction, help others overcome it too. With the faith you have for your dream, find others who are struggling with theirs and be a dream releaser. There’s enough negative talk in the world. Be someone who is known for believing in people.

I was walking to my car after three services one Sunday, and I was worn out. I remember feeling for some reason that I had laid an egg that Sunday. Just then a woman approached me. “You may think this is weird,” she said, “but I was driving home after the service and felt prompted to turn around, come back and tell you that the message today really ministered to me.”

She had no idea how bad I was feeling about the message. Her encouragement helped me to get God’s view on it. A few small words changed my whole week.

Another time I passed by a woman sitting on the curb with her children, and I felt prompted to go back and talk with her. She said she was homeless and had driven their car to church that day on fumes. I gave her some money and encouraged her to get some food or put gas in the car.

A year later I got a letter from that woman. She said that moment had been a pivotal point in her life. She felt that God didn’t care until I stopped and helped her out. She wasn’t homeless anymore and was going to nursing school. Her life was on track. All I had done was tap her cage gently. She had flown out and caught the wind of her dream.

Whose cage are you tapping?

Excerpted from The Dream-Centered Life. Copyright © 2017 by Luke Barnett. Published by WaterBrook, an imprint of Penguin Random House LLC.

Luke Barnett is the pastor of Dream City Church in the Phoenix, Arizona, area. He also leads the Phoenix Dream Center. For more information, visit DreamCityChurch.us.