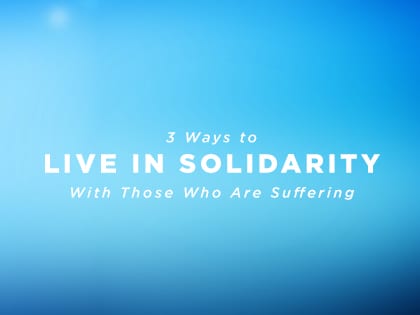 “Our solidarity starts with intercession, not intervention. It is only from God that we receive the wisdom to know how to act.”

My sleep was fragile, harried and ultimately unrefreshing one night a couple years ago, as I worried about my father who had been detained in an Indian airport. A visa mix-up meant he arrived without proper documentation, and he was placed under lock and key until they could deport him 24 hours later.

A few hours into his ordeal, my father managed to place a call to me on the cellphone of another “inmate”—thus alerting me to his detention.

I lived the dark hours after that phone call “in solidarity” with my father, who was suffering in another country, thousands of miles away. And it gave me a beautiful picture of how we live in solidarity with those who suffer worldwide. Here are three aspects of what solidarity looks like.

Activity does not cease when we live in solidarity with others. My work and family commitments continued. Meetings were held, emails written and dinner consumed. Life rolled on. But I did pause to pray more than once, and I called others in my team to pray with me for his well-being. Together, we believed that God would be his comfort and strength, and perhaps—perhaps—provide some sort of breakthrough.

Our solidarity with others starts with intercession, not intervention. For it is only from God that we receive the wisdom to know how to act. It is only in humble prayer that God reminds us that he carries the burden, not us.

Laughter and enjoyment do not cease when we live in solidarity with others. But they are tainted by a shadow, an awareness that the one we care for is not yet able to share in our joy.

From Outreach Magazine  How Discipleship Builds Your Brain

After years of living among those who struggle, I am surprisingly still able to immensely enjoy comfort and even luxury. But I never, EVER, forget my friends who toil away in poverty and eke out a living in squatter settlements and slums. They provide the perspective I need, even in the most affluent situation.

And that perspective (a dose of reality) provides a deep source of wisdom as I go through life. It leads me to adopt a slightly different posture as I embrace the things that come my way.

Finally, I was moved to use my liberty to work for his freedom. I made phone calls to the embassy, the airport and bored immigration officials. I looked up alternative flight configurations and made plans for after he was released. I did the things that he would be unable to do.

True freedom is a privilege—a gift to be used wisely for those who do not possess it.

I am grateful that my father’s ordeal ended. Twenty-four hours was long enough for him to suffer. But, my life in solidarity with the poor is more than a day. It is a long faithfulness to those Jesus loves. It is a commitment to remember them.