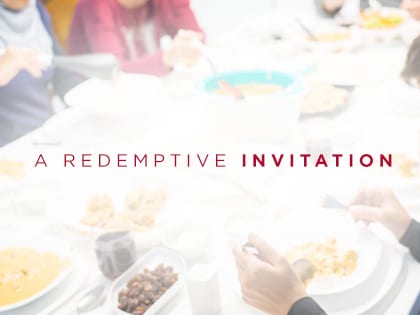 “As Christians, when we engage in these sorts of relationships and conversations, we bring Jesus with us to a literal table.”

A few years ago, I was teaching a group of Christians in a rural, Midwestern community about Islam and how to build bridges with Muslims in our communities. The model of the class was a familiar one in the church: a Christian teacher teaching Christians about another religion in the hopes of changing their perspective toward that other religious community (i.e., information without experience).

Due to white flight, among other variables, this was one of many mostly white rural communities that surround the city of Peoria, Illinois. One of the older ladies in the class gave this explanation for why she was there:

“My son was in the Iraq war. All I know about Islam I have learned from him or from the news, and it’s not good. I am afraid of Muslims. I’m here because I don’t want to be afraid anymore.”

I was thankful that Ramadan was happening at the time of this class, and so I was able to set up a night for our group of about 12 people to be able to break fast at a mosque with Muslims in Peoria. The fearful lady participated, despite the fact that she had never met a Muslim, was afraid of Muslims and was equally timid about simply being in the big city.

When we entered the mosque, we were invited to remove our shoes. Then the women were whisked away to the back part of the mosque—the women’s area—while the men were taken to the front.

A young, white convert to Islam named Eric (his Arabic name was Abd al-Haqq, or “Servant of Truth”) welcomed us. He went on to share a bit about what Muslims believe and what they do to practice their faith. Essentially, for this group, he was reviewing what I had been teaching in the class at the church.

When Eric finished teaching and the time for breaking fast (sunset) was upon us, we all took a date and ate it. Eric explained that Muslims break fast by first eating a date because, according to Islamic tradition, that’s what the Prophet Muhammad did. After this was the time for prayer. We watched as the entire gathered community of Muslims prayed in unison, with their bodies and their words.

As we watched, I couldn’t help but wonder what was going through the minds of the rest of the people in my group. I had lived in the Middle East and spent time teaching at an Islamic school, so this was not my first experience. But this had to be fascinating for the rural white folks who were seeing this for the first time. Not only was the entire congregation praying together, but I know that if Christians had been fasting all day, they definitely would not spend 15 minutes praying before eating!

From Outreach Magazine  Lessons in Missional: One Church's Journey

Finally, the time came for breaking fast with a feast of epic proportions. There was food from Palestine, Pakistan and Iran. Rice dishes, hummus, baba ghanoush, shawarma, stuffed grape leaves and much more. It was epic not only because of the amount of food—which was indeed impressive—but on account of the conversations, warmth and hospitality that was offered to us.

I kept hearing the women roaring with laughter in the back of the room. I had no idea what they might have been talking about, but whatever it was, they were connecting on a deeply true and mystical level.

Often, the most mystical and beautiful moments of our lives happen across the table, don’t they? How many times have you waited for the right moment to share some big news, and that moment came in the intimacy of table fellowship? Eating together is a spiritual practice. And something profoundly spiritual was happening for those women.

The next evening, I debriefed the Ramadan experience with the group who went. The fearful lady who wanted to learn not to be afraid anymore said something incredibly significant to me: “Now I know that Muslims are people just like me.”

Urban folks have a difficult time relating to the isolation and ethnocentrism of rural America. But, to me—having been raised in a rather large rural town of all white people—I understood her words. This was the first time she had ever spent with Muslims. She was fundamentally changed by her experience across the table from those Muslim women.

It is not enough to just hear information. As Christians, we all need these sorts of experiences, and not just because we need to get outside of our comfort zones. We need these sorts of experiences so that we can understand what the apostle Paul meant when he testified that, through Jesus, God will “reconcile to himself all things … by making peace through his blood” (Col. 1:20).

Part of what it means to be a Christian is to participate with God in bringing about shalom on Earth as it is in Heaven. Shalom briefly means reconciliation between humans and God, humans and creation, and humans and other humans.

When we establish relationships with Muslims—or anyone else for that matter—we are actively making peace in that we are making space for righteous reconciliation to happen.

As Christians, when we engage in these sorts of relationships and conversations, we bring Jesus with us to a literal table. The love of Christ, which dwells within each of us, will transform that table into a space where healing, reconciliation and redemption can happen in deep and profound ways. And you can trust that the One through whom reconciliation is made possible will use you to be a healer to those whom our culture has branded as “other.” I, for one, believe, and have seen, that the reward is worth the risk.

A couple years ago, partly inspired by what we experienced at that mosque in Peoria, my wife and I started something called SE7EN FAST. SE7EN FAST is an invitation to Christians to engage in these sorts of life-changing, life-giving relationships with Muslims.

Every year throughout the U.S. and the world, Muslims open their doors to non-Muslims to break fast with them during Ramadan. What we have done is collect and promote these events whenever we are made aware of them. Our goal is to help Christians in the U.S. discover these opportunities for friendship, connection and reconciliation that are made possible by Muslim communities each year.

We invite you to come to a mutual (and literal) table with Muslims; to break bread, share stories, listen, learn, laugh and allow yourself to be transformed in the process.

We have done all the legwork for you. All you have to do is say, “Yes, I will confront the all-too-common narrative of fear and division, and seek peace through engaging in relationships with Muslims in my community.”

To find out more about SE7EN FAST, to RSVP to an event, or to get help finding an event in your area this Ramadan, visit SE7ENFAST.com.

This story is adapted from Of Strangers & Enemies by J. Robert Eagan.

J. Robert Eagan is a teacher and writer, co-founder of SE7EN FAST and author of Of Strangers & Enemies: A Pathway to Peace for Jews, Christians, and Muslims. For more: JRobertEagan.com.