Home Features Why You Should Speak up for Your Pastor 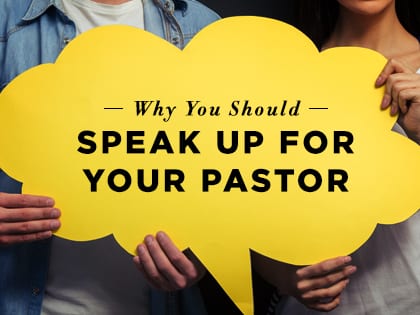 “People who find fault with the pastor never hesitate to voice their opinion. What if the rest of us spoke up in his or her support?”

Lord, let these people know there is a God in Israel. And while you’re at it, let them know that I’m your servant. (1 Kings 18:36, my paraphrase)

A friend once said to me, “Whenever I heard someone running the pastor down, I tell them to pray for him.” I said, “May I make a suggestion? While I appreciate your telling them that, a better thing would be to tell them strongly that you disagree, and say why you love your pastor. They need to hear this.”

Yesterday, when my wife returned from her annual doctor’s appointment, she told me something fascinating.

On her way out of the office, two assistants spoke to her. “Isn’t he wonderful?” “We have the best doctor in the building.” My wife agreed. We love Dr. Paul Vanlandingham.

I found myself wondering, What if the church staff did that when people come into the office? “Don’t we have a wonderful minister?” “We’re so blessed to have such a godly pastor.” “The Lord has blessed us by giving us such a Spirit-filled leader.” That sort of thing.

What if the ministerial staff said something similar as they interacted with church members and others during the week?

People who find fault with the pastor never hesitate to voice their opinion. What if the rest of us spoke up in his or her support?

While some will accuse us of idolatry or something, and point out that Scripture nowhere tells us to praise the pastor as I am suggesting, it does tell us something worth noting. As Jesus sent the disciples out to preach, he told them that whoever received them was receiving him, that whoever listened to them was hearing Him, and that to reject them was to reject him (Matthew 10:40, Luke 10:16). That’s pretty strong stuff.

Clearly, the Lord takes personally how people treat his messengers—and that is going to come as a great shock to a lot of church members on judgment day.

From Outreach Magazine  Idea Starter: Launch a Bible-Reading Campaign With ‘The Bible’ Miniseries

Here’s a story from my journal from 20 years ago.

Jim Parrie called. “I saw Patricia (last name) in my store. She said she’d heard that the deacons had asked Brother Joe [me] to leave. I told her the deacons don’t have that kind of power, they haven’t done that, and you’re not even a member of our church anymore, so why are you worried about it?”

Note: As a new believer, Jim was always sharing his faith with anyone coming into his frame shop. I loved his warm outspokenness. Patricia had belonged to our church for years, and I’d tried hard to be a good pastor to her and her sister, who were both rather high-maintenance. One Monday, I heard they had joined the church down the street, without so much as a word. I was not entirely unhappy about that. Ask any pastor.

“I told her, ‘You left and you are still carrying a load of resentment. That shows the problem is not with Brother Joe or the staff but with you. You need to go see them and make this thing right.’” He said he told her if anyone tried to get rid of Joe, they would find that 90 to 95 percent of the church is behind him.

I stayed at that church another seven years, and continued as a member for another 19 years.

I told Jim I’ve been struggling this week with the sermon for Sunday on this very subject, and to pray for me. It’s hard to touch on any aspect of our church’s problem without plunging into all sorts of stuff that gives me pain and will probably infuriate the sons of Belial. “Help me, Father.”

God bless all those who will love and support their imperfect shepherds, not because their pastors are always right or constantly deserving, but simply for Jesus’ sake.

Those called to lead divided and wounded churches must be careful lest they become the targets of the bruised, the battered and the blind. People who are still carrying loads of guilt over their behavior in a church fight—or loads of anger over what someone else did—can be toxic to the fellowship of the Lord’s church. They must be handled carefully.