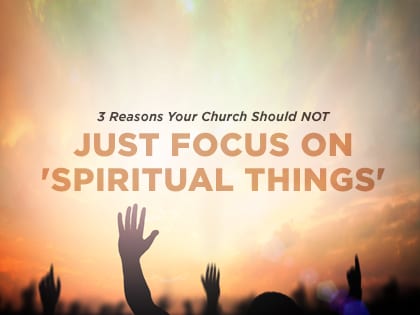 “This is why the church should never be suckered into reducing its mission to ‘spiritual’ things alone.”

What do you think the primary mission of the church should be? Here are a few statements I’ve heard recently from church leaders. Maybe they sound familiar to you.

“Our church focuses only on preaching the gospel and church planting.”

“We don’t get distracted by things that any secular NGO or nonprofit can do.”

These statements sound so reasonable. So purposeful. So focused.

Unfortunately, they don’t line up with the teachings of Jesus.

When I was living in Vancouver, Canada, a local church was threatened with legal action by the city for feeding homeless people. As a registered church they were supposed to stick to the things the government thought churches should be doing: preaching, worshipping and having potlucks. In other words, the church should stay in a little corner, not disrupting the status quo in the city too much.

Instead, this church took the city to court, and won, with the argument that feeding the poor and advocating for their well-being is central to the mission of the church—as central as singing praise songs and eating potato salad made by elderly ladies.

I’m glad they did, because they stand on the side of Jesus and the early church. In fact, in my understanding, caring for the poor is one beautiful way to worship Jesus, especially when we do it in his name. Didn’t he say, “Whatever you do for the poor, you do unto me”? (Matt. 25:40).

So, for those who are not yet fully convinced, here’s why the church should never be suckered into reducing its mission to “spiritual” things alone.

Jesus never limited his mission on Earth to the “spiritual” realm. (I put the word “spiritual” in quotes, because everything has spiritual implications. But this is not the way many church leaders use the term.)

Jesus was deeply interested in transforming EVERY aspect of people’s lives, from the relational, to the economic, to the political, to the deeply personal and the systemic. Here are a few examples (there are many more):

In one infamous incident, not widely practiced by Christians today, Jesus tipped over the desks of sketchy money-changers in the temple because they were exploiting the poor. That doesn’t sound like someone who was limiting himself to merely “spiritual” things.

Jesus was PASSIONATE about justice. That’s why he told church leaders to stop neglecting justice and mercy toward the poor—which he claimed were the more important aspects of the law (Matt. 23:23).

OK. So Jesus didn’t limit himself to spiritual things, but maybe he did those other things to get people’s attention for the main show: preaching the Word! And that’s what the church should do. Right?

Acts of mercy and justice should never be used as a manipulative way of getting people’s eyeballs to focus on our presentation of a spiritual message. Jesus doesn’t want to be reduced to secretary of afterlife affairs. He wants to be King. Of everything. Here and now.

I submit to you that the early church, the ones who had received their teaching directly from the Big Boss himself, did not understand their mission in this limited “spiritual” way.

In fact, they were so serious about their radical new way of life that they sold their possessions—their actual investment properties and townhouses—to redistribute cold hard cash to the poor (Acts 2:45).

They actually managed to eradicate economic poverty in their midst through this commitment to overcome injustice (Acts 4:35). An amazing accomplishment.

When the early church leaders sent Paul and Barnabas out to do cross-cultural church planting, they sternly reminded them NOT to neglect the poor, something Paul would never have done: “They only asked us to be mindful of the poor, the very thing I was eager to do” (Gal. 2:10).

3. The gospel is not merely “spiritual.”

This is where I’m going to ask you to deconstruct your theology a little bit. Stay with me, OK?

Jesus preached the gospel throughout his ministry. But obviously, this preaching took place before his death and resurrection on the cross. So what gospel was Jesus actually preaching? Come on. Think about it. If the gospel is specifically that Jesus died on the cross for our sins and then rose again, HOW on earth did Jesus preach this?

Clearly, he didn’t. Not the way we do, anyway.

Guess what? Mainstream Christianity does not teach the same message that Jesus taught when he walked the earth 2,000 years ago.

If Jesus came only to die and take away our sins, why didn’t God just get it over with when Herod massacred all the babies under the age of two? Jesus could have died right then, and saved himself 30 more years of poor treatment.

Or why didn’t Jesus allow the crowd to throw him off the cliff at the start of his ministry? Why walk around in dusty sandals with 12 whining disciples for THREE more years?

From Outreach Magazine  The Secret That Changes Everything

The truth is, Jesus came to do more than die. He came to live, and to show us how to live. He came to preach the gospel—the good news—of an incredible upside-down kingdom, a kingdom that would come ON EARTH as it is in heaven. A gospel that would be “good news for the poor” (Luke 4:18).

“Jesus came to Galilee preaching the gospel of the kingdom of God.“ (Mark 1:14)

“Then Jesus went about all the cities and villages, teaching in their synagogues, preaching the gospel of the kingdom.” (Matt. 9:35)

“I must preach the kingdom of God to the other cities also, because for this purpose I have been sent” (Luke 4:43)

The gospel is about the kingdom of God, which culminates in the death and resurrection of Jesus, when things shifted in the heavenly realms but is broader than that event. It’s a kingdom that is truly good news—economically, physically, socially, politically, and, yes, spiritually—for everyone, but especially for the poor. That is what the full weight of Jesus’ teaching and life shows us.

I’m passionate about the spiritual freedom that Jesus brings through his work on the cross. He overcame death and sin in that act. His actions on the cross also fulfilled everything he had been telling us about loving our enemies and laying down our lives for others. That’s why it makes no sense to lay those teachings aside and claim we are “focusing on the gospel alone.”

Scot McKnight puts it like this: “The gospel is more than the crucifixion. It is the announcement of Jesus as the world’s true king—his life, his teachings, his actions, his death, his resurrection, and his ascension (and return).”

In short, Jesus commissioned us to teach his followers EVERYTHING that he had taught (Matt. 28:19-20). Let’s not reduce it to some kind of formula.

At the beginning of this post I asked what the primary mission of the church should be. Two-thousand years ago, Jesus answered this question better than most of our churches do today:

Don’t let anyone reduce it to something smaller.