Home Features Is It OK for Christians to Use Marijuana? 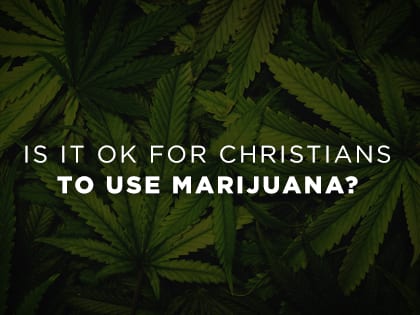 “A growing number of Christians today believe that it is biblically permissible to use cannabis recreationally. Are they right?”

I used to smoke marijuana every day.

Sixteen years ago, when I was in my late teens, cannabis was a big part of my life. Today it continues to confront me as a pastor in a city where recreational marijuana is legally celebrated. Our church office is directly across the street from a dispensary where I can legally buy a prerolled joint for seven dollars.

How are we to think about recreational cannabis use in the church? A growing number of Christians today believe that it is biblically permissible to use cannabis recreationally. Are they right?

Quick, pat answers to the question of recreational cannabis use are often unhelpful. Responses without nuance will not best serve the church in the long run. To say that alcohol is permissible, and cannabis is not, because “Christians drink beer and wine for the taste, but people only smoke pot to get stoned,” just won’t do. Such a simplification distorts the truth.

For one, Christians don’t drink beer and wine only for the taste. Even moderate drinking, which is biblically permissible, has lubricating psychoactive effects. From a biblical perspective, this lubricating effect can be acceptable. While drunkenness is clearly prohibited (Eph. 5:18; Rom. 13:13; Gal. 5:19–21; 1 Peter 4:3), God has given “wine to gladden the heart of man” (Ps. 104:14–15).

However, evangelical churches sometimes have prohibited the use of alcohol among members because the Bible forbids drunkenness. This is a mistake. The Bible warns us against such extrabiblical prohibitions (1 Tim. 4:3; Col. 2:16–23). Scripture permits the moderate use of alcohol when it can be enjoyed in faith, even though it has psychoactive effects.

Does God, then, also permit the recreational use of cannabis? Should we treat cannabis like alcohol in the church? Is it OK to light up around the campfire just like it may be to enjoy wine at a wedding?

Let’s examine this commonly used comparison between alcohol and cannabis. The following are ways that cannabis and alcohol are similar and dissimilar.

From Outreach Magazine  Why the Ideal Church Size Debate Is Unhelpful

Ways that cannabis is unlike alcohol:

It is unhelpful to make direct correlations between cannabis and alcohol, as if all the Bible’s teaching on alcohol applies to cannabis. Not only are cannabis and alcohol vastly different chemical compounds, with vastly different effects, but the Bible gives us clear and direct permission for the moderate use of alcohol while never directly referencing other psychoactive compounds such as marijuana.

Even though cannabis is never directly mentioned in Scripture, we do have God-revealed principles to guide and direct our thinking about its recreational use. We often get help on specific questions when we keep our eyes on the big picture. What is the endgame for the Christian life? What should we be aiming at in all things?

From Outreach Magazine  A Wedding Banquet for the Homeless

God is glorious beyond measure, and Christians seek to experience the reality of his glory, for the sake of his glory. Sin has distorted our vision and corrupted our world. Ever since sin first entered the world, all of us have been born spiritually dead, unable to discern the true glory of God (Eph. 2:1–5; Col. 2:13; 2 Cor. 4:4). When we experience the redemptive work of Christ through the Holy Spirit, we are awakened to the reality and beauty of God (2 Cor. 4:6). But until we see him face to face, we still see his glory as through a glass dimly (1 Cor. 13:12). As redeemed believers, we are on a journey to knowing him without obstruction. Therefore, we do not want to distort reality; rather, we aim to know him as he really is. We want to see things as they really are.