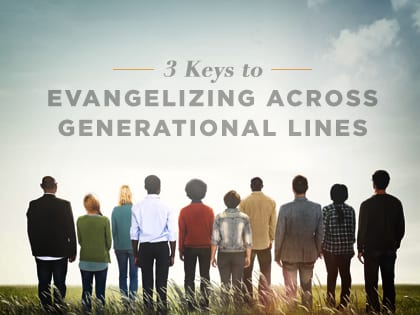 Ed Stetzer: “Things have changed, but the gospel—and its need for proclamation—remains unchanged.”

How should generational dynamics affect evangelistic methods? Or, to put it another way: “How is reaching people over the age of 40 different from reaching those under 40?”

It’s a tricky issue. We must first recognize that the categories are nuanced, generalized and filled with exceptions, so I’m not making hard and fast conclusions. However, there are some things worth observing.

Generally, generations are divided up into many categories such as builders, boomers, Generation X, millennials and Generation Z. But, let’s simplify and just think about the dividing line being above 40 and below 40 years of age. Let me share three observations that I believe are helpful.

First, we must understand the whole idea and evolution of tolerance in the American culture.

Those over 40 are often much more willing to view truth as an absolute—to say, “If there’s only one way to God and you can demonstrate what that one way is, then I might be persuadable.” They often view Christianity more favorably as a whole, as well, creating a bit more openness than those who are below 40.

When it comes to those younger than 40, the perception is often that truth is relative—there is more than one way to God. The notion that there is only one way is viewed as intolerant and unhelpful. This posture is expressed in a number of ways. In particular, this is where a movement toward pluralism and universalism is rooted.

Those over the age of 40 tend to ask themselves, “Is it right?” while those who fall below that line lean toward the question, “Is it fair?” Fairness has been bent to mean that many ways and truths are valid.

From Outreach Magazine  Is There Really Just One Way to God?

That creates a different starting point and different challenges.

Second, there is a distinct difference in how the two groups prefer to be engaged.

Reaching those over 40 is perhaps more effective in a large-group setting with a high level of anonymity. This includes things like church outreach days and evangelistic meetings.

This sort of “attractional” outreach has morphed over time into what we generally refer to as the “seeker movement.” If you are a baby boomer, you were not necessarily invited to a stadium, but you may have been invited to a church with contemporary music, approachable teaching and a relaxed atmosphere.

But for those under 40, the attractional approach is often much less appealing. Instead, many younger adults are first connected through relationships, rather than through events. An attractional-type event may play a significant role in their lives, but it is often preceded by a conversation, a connection with a person.

Third, the generation before—those over 40—enjoyed a home-field advantage.

The culture in which older adults were reared often assumed the basic tenets of Christianity. For most, Christianity is real, God is real and people just need to get right with God.

This is in contrast to those under the age of 40, who are often characterized by a spiritual uncertainty. The milieu in which they have come of age in the West is more complex, more nuanced. They ask questions like “Who is God?” and “Who is Jesus?” and have little knowledge of the Bible we appeal to as authoritative.

From Outreach Magazine  An Exponential Dream

What does this mean for evangelism?

The three factors I mention in this article aren’t the only factors, of course. However, as cultures and generations change, it’s vital to adjust our approaches and methodologies for whatever group we are engaging.

The how of evangelism is, in many ways, determined by the who, when and where in culture. And few would disagree that the last few decades have seen some stunning cultural shifts—so, we should expect our evangelism to be affected.

This means developing new approaches, not just ridiculing old approaches. (If most of your conversations about evangelism involve making fun of stereotypical evangelistic approaches, there’s a problem.)

It’s helpful to remember the words of Dwight L. Moody when a woman criticized his evangelistic methods. His retort: “I like my way of doing it better than your way of not doing it.”

So things have changed, but the gospel—and its need for proclamation—remains unchanged. Our task is to listen to the words of Jesus and be witnesses to everyone—over 40 and under, and all around the world.