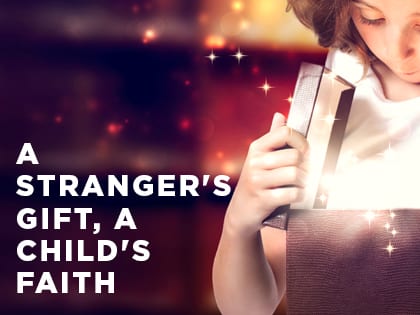 A young woman’s story of how a stranger’s gift set her down a path of lifelong faith.

Elvina Arventii looks like any typical 20-something mom in Fresno, California. The smiles she gives to her husband, Denys, and their daughter, Arina, do not betray the pain of her early life growing up in poverty in a family of nine. But they do hearken back to the time when Arventii’s life changed for the better—thanks to a shoebox full of goodies.

Arventii grew up in Kivertsi, Ukraine, during the time when the country was part of the Soviet Union. Her parents were Christians, which made it very difficult to pursue higher education or land a good-paying job.

“It was financially very hard for my dad to support a family of nine,” Arventii says. “I think every family in the Ukraine had a piece of land they work on. They grew their own vegetables and fruits just to survive. That was the main source of food for us.”

Even as a little girl, Arventii had a part of the field that was hers to work. There was not much time to be a kid. There was only work on the farm and school.

At her school, under Communist rule, any talk of faith was discouraged. In fact, to admit that you were a Christian would bring ridicule.

“The teachers told us that God was not real and people had just made him up,” Arventii says. “In our schools there were times when, if you were a Christian, they would lower your grade.”

The Christians of Kivertsi had to stay mostly underground.

“The church was persecuted,” Arventii says. “A lot of times our services were in the forest. We were not able to have our own church. A lot of our church members were in the prisons for being Christians.”

The Faith of a Child

It’s difficult for a child to hold on to their faith under that kind of pressure. So how did Arventii stay grounded? Much of her strength came when God answered a child-like prayer.

At 7 years old, “my dream was to have a regular toy,” Arventii says. “We made a lot of games and toys with flowers, trees, rocks or anything. It was special for me to have a real toy.”

From Outreach Magazine  Giving New Believers an Example to Follow

Specifically, she wanted a doll of her very own. When she asked her parents for one, her mother told her to pray.

“We always prayed before food or before bed. But those prayers were memorized,” Arventii says. “It was like something I had to do. It wasn’t out of my personal relationship with Jesus.”

She began, at first, to ask God for a doll in a way that her mother would be sure to hear. Her prayer was, nonetheless, sincere. When Christmas came, the children received the typical gift from their church: a bag with candies, an orange and a walnut. There were no elaborately wrapped packages, no dolls.

The Gift of a Stranger

Then, one January during the bitter Ukraine winter, something happened.

“It was freezing cold with lots of snow,” Arventii says. “Schools were closed and we pretty much spent all day at home. That’s when missionaries came with some ladies from our church. They knocked on the door and we all ran to the living room. They brought the boxes. It was very special.”

Arventii took her box, ran to her room and rummaged through her treasures. The box had candies, school supplies and other wonderful things—but unfortunately, no doll.

“Even though I didn’t have a doll, I was excited with what I had in the box,” Arventii says. “We all were running around the house and showing each other what we got. It was very, very wonderful.”

Her sister’s box did contain a doll, and Arventii tried to make a trade her to no avail. Then, she noticed her mother helping her little brother with his box. That’s when she saw it.

“There was a little doll on the top,” Arventii says, adding how she felt when her mother handed her the doll. “It was very very meaningful for me. I was on the top of the world.”

She was certain that this was God answering her prayers.

“Later in my life, I would remember this moment if I had problems or wanted something,” Arventii says. “I realized that God is real and not just a fairy tale. It was my first step toward trusting God and trusting prayer. I knew that he loved me.”

At age 16, Arventii took the next step from that simple faith.

“I decided that I wanted to not just be the daughter of Christian parents, but I wanted more of a relationship with God.” One Sunday in church, she felt God beckon her and she gave her life to Jesus.

As the Soviet Union broke apart and Ukraine became an independent nation, more opportunities arose for Arventii’s father. He was able to get a job that would take him to America. Eight years later, the rest of the family made it to the U.S.

It was at a church in America that Arventii learned where those shoeboxes came from. One November, the church was collecting gifts for Operation Christmas Child.
“I said, ‘Wow!’ That’s were my box came from,” Arventii says. “I started asking people how it works and who’s doing it.”

She contacted Samaritans Purse, and now she’s a spokesperson for the collection. She travels the country and tells her story.

Now, as a mother, she is sure to keep the tradition with her own child.

For more information about how you partner with this incredible ministry, contact Samaritan’s Purse at SamaritansPurse.org or call 828-262-1980.