Home Features A Woman, a Well, a Postmodern Movement 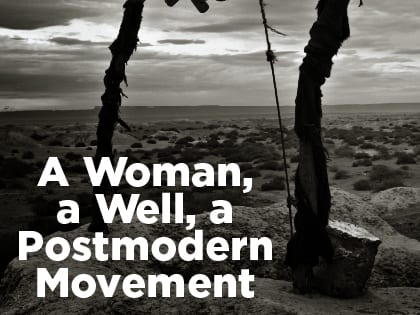 How this fivefold evangelism process can lead to a witnessing community and a movement of God.

Lips bleeding from a stinging desert wind, Jesus sought refreshment at Jacob’s well. Even before he drew water, a woman from a nearby village arrived, a high-noon exile.

The Message picks up the story in John 4:

Jesus, worn out by the trip, sat down at the well. It was noon.

A woman, a Samaritan, came to draw water. Jesus said, “Would you give me a drink of water?” (His disciples had gone to the village to buy food for lunch).

Two decades before the recent release of Breaking the Huddle: How Your Community Can Grow Its Witness, the book’s three authors led college campus ministries with little clue about how to bring people to Christ. This is the interconnected story of what they’ve learned together.

Don Everts, an introverted writer for whom witness was kryptonite, had recently moved to Boulder, Colorado, to lead a campus ministry in a thoroughly postmodern city. For the first time in his life, he was surrounded by people who were not Christians.

Always one for precise articulation, he looked for a strategy to introduce skeptical people to Jesus in ways that weren’t cliché or rude.

At nearly the same time, Val Gordon huddled with a group of students—literally huddled—meeting in a dark and spooky chapel basement well below the pulse of community. The truth was, Gordon now confesses: They liked not being seen.

A systems thinker, the daughter of an evangelist, leading a huddled community, she wondered: How would they ever move out?

Following an intensive 30-week small group series for non-Christians on the campus of UCLA, Doug Schaupp, a visionary with a beehive of great ideas, looked at the results: good attendance, deep conversations, life impact—and no new believers.

Are we working from the wrong evangelism paradigm?

Is there a process through which people come to faith in this postmodern context?

From Outreach Magazine  Replace ‘What Ifs’ With ‘Even Ifs’

If so, how can Christians facilitate that process?

As they shared their stories and evaluated their experiences, here’s what emerged: a progression. Five Thresholds of Postmodern Conversion—trust, curiosity, change, seeking and following.

Over the next three years, more than 2,000 interviews with new believers and non-Christians confirmed the process. Schaupp saw it time and time again.

Relentlessly collaborative, Schaupp set out to find partners to test and apply the five thresholds in real-world settings. Simultaneously, before a word was written about it, these three authors—Doug Schaupp, Don Everts and Val Gordon—created, experimented, researched, failed, learned, applied and reapplied the five thresholds of conversion in their own witness and ministry.

I Once Was Lost

For years, Don Everts was a casual buddy of Doug Schaupp. They would hang together at annual InterVarsity conferences—which is what they were doing in 2005 when a conversation led them deep into the night of New Year’s Day.

Two years earlier, Everts had read about the five-threshold process and had tried to apply it to his own life and ministry. He and his staff had experienced a ministry driven by deepening compassion, but there were still questions. And an appetite for answers.

Schaupp responded. He had a book kicking around in his head but was having trouble getting it onto paper.

The conversation led to collaboration, and ultimately the release of I Once Was Lost: What Postmodern Skeptics Taught Us About Their Path to Jesus.

In 2008, Everts left campus ministry in Boulder to lead outreach at a two-century-old Presbyterian Church near St. Louis.

Working in collaboration with Schaupp, Everts sought to apply the five thresholds to his outreach at the historic church that had rooted habits and deep ruts.

Up From the Basement

Val Gordon phoned Doug Schaupp shortly before I Once Was Lost was published in 2008. By then, she had moved from the dark basement chapel in Illinois to another campus ministry in Boston. She had been attempting to apply the five thresholds for 10 years.

A systems analyst by experience and inclination, Gordon instinctively knew the five thresholds was a solid assessment of the process of postmodern conversion.

She just called to ask, “How?”

In her work at both Illinois and Massachusetts campuses, students seemed to get stuck in the second threshold: curiosity.

“The framework of the vision was compelling,” Gordon says, “but it was useless to me if I couldn’t find a way to implement it in my community.”

The phone call set in motion years of collaboration between Schaupp and Gordon on evangelism, growth, training and research, seeking answers to questions like:

How do you best apply the five thresholds?

How do you create systems to facilitate postmodern conversion?

How can you create more opportunities for people to come to faith?

The Mindset of Jesus

One translation of Scripture states that the woman at the well was “taken aback” when Jesus asked her for a drink of water.

“How come you, a Jew, are asking me, a Samaritan woman, for a drink?” (Jews in those days wouldn’t be caught dead talking to Samaritans.)

For all three authors, the gospel narrative of the woman at the well forms the heart of the five thresholds. Beyond the prejudice and divisions of ethnicity, religion and morality, through a series of thresholds, Jesus invites the woman to draw from a deeper well. John 4 records movement from:

Distrust to trust.
Indifference to curiosity.
Closed to change to open.
Meandering to seeking.
And ultimately, lost to saved.

“If I really believe God was wooing everyone to himself,” Gordon says, “how would I reshape my life and witness to partner with him?”

Embedded in the narrative of the woman at the well lies a mysterious, organic and engaging conversion process Jesus models for his mostly oblivious disciples (then and now).