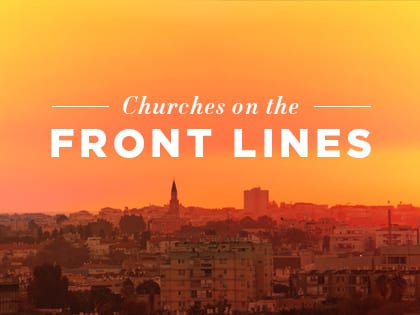 Rich Stearns: “Evil forces beyond our comprehension are destroying the lives of millions of people.”

It was a powerful moment at the Willow Creek Global Leadership Summit in August. In the auditorium of Willow’s main campus near Chicago, from which the summit was telecast around the world, a hushed audience watched a video about families uprooted by violence in Northern Iraq and a young, courageous priest caring for them. “We don’t call them refugees,” the priest said, “we call them our relatives.”

The screen went black, and the man in the video, Father Daniel, walked out on stage. The crowd erupted in a long, enthusiastic standing ovation. Pastors were clearly moved by Father Daniel’s story of how his church, Mar Elia, took in 1,600 people who had fled from armed militants. Standing there in the flesh, Father Daniel brought the plight of the refugees—that crisis on the other side of the world—close and immediate.

Father Daniel was also there to represent the many Christian leaders in the Middle East who are caring for refugees and displaced people. We don’t hear much about these heroes of the faith, but they are greatly overburdened and need our help.

Imagine that your community’s population increased overnight by several thousand—a deluge of people with little more than the clothes on their backs, who are hungry, fearful, exhausted and despairing. As a church leader, what would you do? That’s the dilemma facing Father Daniel and others serving on the front lines of the refugee crisis.

Earlier this year, I visited Father Daniel in Northern Iraq. He gave me a tour around his church grounds where hundreds of families live in singlewide trailers, called caravans, sharing bathrooms, cooking stoves and laundry facilities. In August 2014, the families fled their villages near Mosul after an armed group marked their homes with the Arabic letter “N” for Nazarene—Christian. They knew staying meant either forced conversion to Islam or death.

Everything changed for Father Daniel the day those desperate people showed up at his church gate. He suddenly had to be “on” 24/7, absorbing their anger, fear and frustration. At just 26, Father Daniel is both a regular guy who likes McDonald’s hamburgers and an impressive figure who speaks Aramaic, the language of Jesus. He knows what it’s like to run from danger; when he was 16, his family left Baghdad under threat from Al Qaeda. All in all, he is divinely appointed to understand the new members of his flock.

“Some people are angry inside. One even threw the food they were given in my face,” Father Daniel said. “God told me that these people are gifts of grace to us.”

I met another courageous church leader in Lebanon last year. So many Syrians have fled there that now, 1 in 3 people in Lebanon is a refugee. And given that Syrian forces occupied Lebanon from 1976 to 2005, perhaps it’s no surprise that few Lebanese share Father Daniel’s attitude of “relatives, not refugees.”

But Pastor Joseph in Beirut does. He goes out to the streets where refugees live in tented settlements or ramshackle apartments, inviting them to come to his church on Sundays and share a meal. Hundreds of Muslims show up each week.

I asked Pastor Joseph how he explains this, and he said, “The secret is love. We show them Christ’s love, and they come.” His church is growing by leaps and bounds as a result of this outreach.

But every day is a struggle for pastors like Joseph to meet refugees’ overwhelming needs. And after five years of shouldering this great burden, they’re wondering why the global body of Christ hasn’t come to their aid. “The church here in the Middle East needs help,” Pastor Joseph said. “Sometimes we feel that we are forgotten.”

He has prayed for guidance, and God gave him the image of Joseph of Arimathea, the wealthy man who took Jesus’ body down from the cross and laid him in the tomb—a small but critical role in Jesus’ resurrection. To Pastor Joseph, it’s the Middle East church that is now on a cross. “My call to the pastors, the leaders in the West: Be like Joseph of Arimathea,” he said. “Feel the weight of the dead body. Remove the nails from the dead body in the Middle East so we can see the resurrection.”

It’s a remarkable plea—and difficult to ignore. These brothers and sisters in Christ continue to pour themselves out for refugees, even as they face persecution and their own ranks dwindle. The archbishop in Iraq told me that there are 80 percent fewer Christians in the country than just 10 years ago.

For World Vision, reaching out to embattled pastors is part of our DNA. Our earliest programs in postwar Korea served not just orphans and widows but the shattered remains of the Christian church, which had been driven south by communists.

History is repeating itself today in the Middle East. The good news is, you can help.

First, you can pray. Evil forces beyond our comprehension are destroying the lives of millions of people; lift up those who struggle against the “principalities and powers” to demonstrate Christ’s love in the midst of it.

World Vision has come alongside church leaders in the refugee crisis, sharing their burdens by providing things like food, clean water, primary health care and psychosocial programs for children. You can join this effort by engaging your church in a Refugee Sunday event, equipping churches to serve refugees or donating to our Refugee Responder program.

In 1 Corinthians 12:26, Paul says of the body of Christ, “If one part suffers, every part suffers with it; if one part is honored, every part rejoices with it.” Suffering with our brothers and sisters in the Middle East today will have a lasting impact. “We may forget the person who persecuted us,” Father Daniel said, “but we won’t forget the person who stood by us.”