Home Features The Debt-Free Church: Is It Possible? This Georgia Church Says Yes 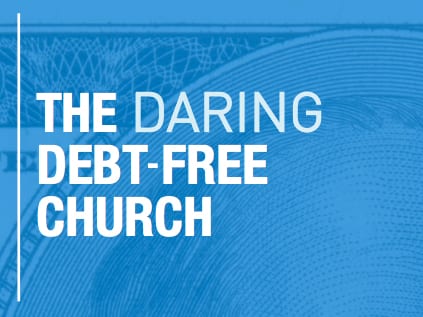 Is it possible to have a debt-free church? Journey Church in Roswell, Georgia, would say yes.

Is it possible to have a debt-free church? Journey Church—a safe and stable congregation in Roswell, Georgia, a bustling suburb of Atlanta—would say yes. At least they would today. But there was a time when their answer might have been quite different.

Journey Church has been on a, well, journey, one that has taken them into uncharted waters, a journey that was and still is dangerous and daring.

It began with a whisper, a call from on high. As is often the case when God speaks to us, there was a healthy amount of initial disbelief and double-checking to be sure that the lines were clear and that they had heard what exactly they were being led to do.

The message was clear and unwavering: “SELL EVERYTHING.”

In February of this year they did just that, and they became one of the few debt-free churches in the country. And it would be safe to say that their town of Roswell will never be the same.

The Seeds of Change

In church circles, growth is a given. Everything is expected to get bigger—more buildings and facilities, bigger programs, better music and sound, and a bigger worship experience. Big and bigger is, well, a big deal. Becoming a debt-free church is not one of the primary goals, as it turns out.

But there is another edge to the “bigger” sword, one that causes many congregations to be saddled with a tremendous burden, anchored to huge monthly payments that will never end, and that ultimately keeps them from having the freedom to do what they are called to do in the first place. This kind of financial burden must surely have been on Jesus’ mind when, in Matthew 6:24, he says that “no man can serve two masters.”

He goes on to say that we should be good stewards and stay free enough to listen and respond to his call without having to judge every serving opportunity through the lens of financial feasibility. He finishes that chapter by saying that we should live worry-free lives.

Journey Church had labored under an enormous load of debt for a long time when Pastor Dan Garrett arrived a little over five years ago.

“The Christian Church did a survey that said that the average megachurch in our denomination carried a debt load that worked out to be about $1,800 per church member,” says Garrett. “Our church of 200 had a debt load of almost $13,000 per member.”

The result of that kind of onus was predictable. For more than a decade after going into debt to build a 2.7 million dollar sanctuary, the church struggled to grow and get ahead financially.

When Garrett arrived, it was obvious that something needed to be done, especially if he was to carry out his own vision of what the church should be doing versus what it was actually doing currently.

Garrett had always been out on the cutting edge of the gospel, and by the time he took over as pastor at Journey, he had already done some other seemingly outrageous things. He notoriously started a church in an infamous strip club in the financial district in Atlanta. The Gold Club, as it was previously called, had been a haven for crooks, and was eventually shut down by the FBI. Garrett turned this den of iniquity into a place to worship, and the word spread far and wide about this pastor and his seemingly crazy gambit.

“Going in, I wondered how I was going to promote this church plant,” says Garrett. “But then CNN and other national and international news outlets started calling me when they heard about what we were doing. More evidence that God is smarter than us, just in case we ever wondered about that.”

Preparing for the Journey

Sometimes all of the tiny streams in our life come together to form a raging river. Such was the case at Journey Church. Garrett had, over time, assembled a staff who shared his vision for what the church could be in its community. And he spent years teaching the congregation and encouraging them to think outside the church walls.

By November of 2015, the leadership and the congregation were all on the same page in regard to what their church should be for the good people of Roswell.

“We all have a pulse for being the hands and feet of Christ,” says Christy Dixon, director of children’s ministries at Journey Church, “We all know that we shouldn’t be spending all of our time within the four walls of the church.”

That was the collective vision, and one that needed to be acted upon. That’s the problem with really listening, isn’t it? We hear, perhaps for the first time, what the mission is, but with no details about how to carry it out, or what sacrifices might have to be made, or even where we are ultimately going.

The leadership responded by bringing in a consultant to help the church work through their current situation and to at least begin thinking about the way forward.

“He didn’t try to tell us what to do,” says Garrett. “He simply guided us through the process, and that was healthy because there were people in the congregation who had real ownership of the building.” They had helped design it. They were on that leadership team, and it was kind of their baby.

From Outreach Magazine  3 Ways to Follow Christ This School Year

And, then one night, in one of the leadership meetings, there was an epiphany. The conversation changed from “We need to become a debt-free church and shed this enormous burden” to “Wow, this could really be the impetus that takes us into a new season of ministry.” Suddenly, all of the light bulbs in the room turned on at once, and the people began to catch the vision for what could be.

So, the building and the property were put up for sale with the caveat that it could take two years to happen. Instead, two weeks later a potential buyer appeared and, only a few months later, the sale was completed to an aggressive buyer who really wanted the property.

The church almost immediately began to experience what is possible when you are, as Garrett describes, “A debt-free church plant with money.”

Today, Journey Church has found a home in The Milton Center, a teacher training facility. They are thinking outward and doing great work in and around the metro Atlanta area. They are carrying on the work of the church and being salt and light in their community.

They have given large checks to local causes, and they are tithing on the proceeds of the sale of their buildings and land. The children are making lunches for other kids in the area who don’t have enough food, especially in the summer when school is out.

There is another unpredicted outcome of the sale and move, one that is inspiring people like Cedric Noel, a member of Journey Church for the past five years. “This move created opportunities for everybody to take a role,” he says. “It has rallied everyone. We are closer, and we serve more in every way.”

This journey has been and will continue to be transformational, no doubt. Like most journeys into the unknown, it has had its share of potential pitfalls and danger. But, in the end, as it always is, a simple act of obedience is proving to be what changes things. Obedience is like that. It redirects our focus and lets us see what can be done if we step out in faith.

And, for the new, debt-free version of Journey Church, there’s a lot of road ahead and there is no turning back. “We’re not about mortgages and maintenance anymore,” says Garrett. “We are about ministry and mission.”

This article was originally published by Missional Marketing, a Christian marketing firm that helps churches, schools and businesses with online advertising and marketing.