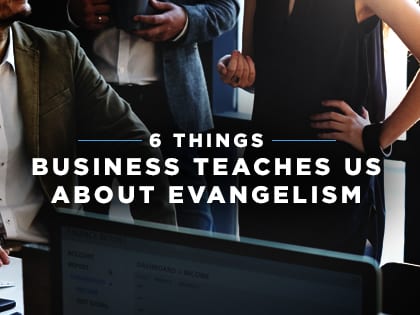 “I grieve that the marketplace shows a little more creativity and tenacity than we do in the church. It doesn’t have to be this way.”

One of the things I am passionate about is applying principles learned from the marketplace and applying them to the work of kingdom. At times, I grieve that the marketplace shows a little more creativity, innovation and tenacity than we do in the church. It doesn’t have to be this way.

I have had the opportunity to work simultaneously in both ministry and the marketplace. In fact, the same summer I graduated from architecture school, I was also ordained into the ministry. I assumed different leadership roles at my church, including pastor of evangelism and pastor of membership. My training camp in the marketplace took me into different leadership roles in the field of architecture, real-estate development and financial advisory. I now serve as vice president of Visioneering Studios, a national design/build firm.

I have learned that if there are business principles that consistently work in the marketplace, then it’s probably because they are universal principles. Any principle that is universal is more than likely a principle also found in Scripture.

Evangelism in the Kingdom of God

Let’s unpack a bit what Scripture says about evangelism.

We learn that the whole point of the New Testament is to proclaim the gospel of Jesus Christ. This good news, summarized in 1 Corinthians 15:1-4, says that due to the death, burial and resurrection of Jesus, all of humanity has the opportunity to overcome sin and death, redeem our relationship with God, and gain access into an eternity with him.

An evangelist is a person who engages in the act, or the lifestyle, of evangelism—the sharing of this good news. An evangelist is particularly burdened by the needs, questions and frustrations that exist in culture and society; she recognizes that many of their life pursuits result in idolatry. She is deeply compassionate about those who live, work and play in the margins of faith and believes that she has an answer for them. She is equally passionate about both sharing the gospel with people and equipping others to do the same. She believes that the church should be a gracious host to those who are seeking answers and sounds a call for our communities of faith to care for those who are far from God. As you read this, do people you know come to mind?

The Specialty of Evangelism

The problem is, when people of think of evangelism—or the description of an evangelist—they cringe. They think, “Well, that’s not what I’m gifted in. That’s Mark … or Susan.” They believe that evangelism is for the people who have been particularly gifted as evangelists. They will even cite Ephesians 4:11 to make the argument:

“Now, these are the gifts Christ gave to the church; the apostles, the prophets, the evangelists, and the pastors, and teachers.”

“See? Those are specific gifts,” one might exclaim. “This is a gift that I do not have. I will leave evangelism to those who are gifted.”

Well, hold on. It’s doesn’t work that way. Evangelism is not a silo … it’s a team sport.

One of the greatest lessons I learned years ago was about relational evangelism. I read the book written by Bill Hybels and Mark Mittleberg called Becoming a Contagious Christian. For me, it helped to shatter the biggest misconception of what, and who, is an evangelist.

I distinctly remember that the book’s accompanying small-group study challenges participants to list what, and who, they think of when they think of evangelists: people like Billy Graham, Greg Laurie, Luis Palau or Miles McPherson. They are then challenged to put a big “X” through those conceptions and “throw them out the window.”

Then, Hybels and Mittleberg paint a different picture of who is an evangelist. They go on to describe six examples of evangelists in Scripture.

1. The Confrontational Evangelist – On the day of Pentecost, the apostle Peter stood up with an aggressive message that essentially told his Jewish onlookers that they had killed the Messiah they proclaimed to be waiting for.

2. The Intellectual Evangelist – On Mars Hill, the apostle Paul used cultural anthropology and persuasive discourse to stood up on the greatest intellectual platform of his day to share the good news of the “unknown God.”

From Outreach Magazine  Woodlands Church: Trade as One to Hold Fair Trade Market

3. The Testimonial Evangelist – In John 9, a blind man who knew nothing about who Jesus was or what theology he shared, testified that he was once blind, and then he was healed—by Jesus.

4. The Interpersonal Evangelist – In Luke 5, Matthew is described as having one of the most despised occupations of his day: tax collecting. However, when he responded to the calling as an apostle, his mode of sharing this good news was to invite people into his home for a dinner and a conversation.

5. The Invitational Evangelist – In one of my favorite stories in Scripture, a Samaritan woman met Jesus at Jacob’s well. After receiving words of living water, she ran back to her village and invited them to hear from the man who knew about the thirstiness of her soul and offered to quench it. Amazingly, the entire village accepted her invitation and ran to meet Jesus at the well. All the apostles brought back that day was a donkey.

6. The Serving Evangelist – In Acts 9, we read about Dorcas, a lady who served her community by making clothes for those in need. When she died, people remembered her example and were drawn to the gospel because of her servant spirit.

When I learned about these examples, I was both enlightened and liberated. I had lived under what I considered a yoke: a specific model of an evangelist. I lived in shame because I didn’t feel comfortable with a prepared message or an aggressive approach. I thought I was failing. But when I began to imagine that that are many ways to evangelize and I was gifted in a unique way, I felt empowered.

The greatest threat to evangelism in the kingdom of God is the mindset that evangelism should be relegated to the specialists. Oddly enough, this lesson can also be learned from some of the greatest business evangelists as well.

The Art of Evangelism