Home Features When to Question a Public Figure’s Religious Conversion 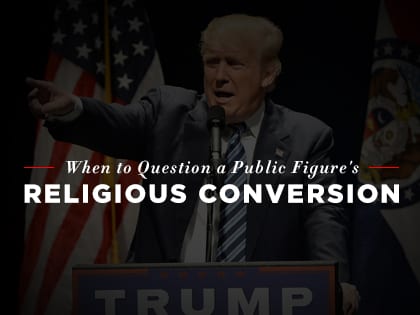 “Historically, preachers have been notorious for believing professions of newfound faith from people running for office.”

“Behold, Lord, half my goods I will give to the poor. And if I have defrauded anyone, I will give back four times as much” (Luke 19:8).

Let me hear Donald Trump say that, and I might believe he has truly converted to Christianity.

And to those who say (correctly) that we hardly hear of anyone who makes the kind of reversal that Zaccheus did in Jericho that day, I would say, “Well, how about something in the general area, then?”

Let’s see—and hear—something from the candidate himself to indicate he has changed his ways.

I’d say that about Trump, or Hillary Clinton, or the local candidate for coroner.

Related: Max Lucado on bringing decency back to presidential politics »

What we should question is when preachers call news conferences to announce, “The candidate has assured me that he has been saved.” I’d like to hear it from the candidate’s own mouth. And I would like the preachers to be silent.

I know, I know. Asking preachers to be silent when they have a scoop is asking a great deal. But it’s still the right thing to do.

Historically, preachers have been notorious for believing professions of newfound faith from people running for office.

A generation or more ago, Eldridge Cleaver, a firebrand in the civil rights movement, testified that he had been converted to Christ from whatever views he held previously. Preachers fell all over themselves to celebrate this trophy, to give him audiences, to repeat his story. Shortly afterward, Cleaver moved on to other causes—Rev. Sun Myung Moon, the Mormons, cocaine addiction, and finally Republicanism—leaving all his Christian friends wishing they had been more restrained in their enthusiasm for the man.

“Let the redeemed of the Lord say so,” says David in Psalm 107:2. It’s their story—let them tell it.

Celebrities. Politicians. Athletes. Can they get saved? They sure can. Did someone read a book or the Bible or hear a witness from someone and turn their lives over to Christ? Great. We pray for this. But if they did and when they do, then let them tell it. It’s their story.

What we do not need is preachers telling their stories for them, putting words into their mouths.

Once that convert to Christ has lived for the Lord openly and made a complete reversal of his or her life and the story is consistent, I might repeat it. But not at first. Not before he gets a chance to tell his own story. After Watergate’s Charles Colson went public in his testimony for Christ, people were understandably skeptical. But when he turned around and devoted himself to prison reform, he made believers of everyone. His “long obedience in the same direction” left doubt in no one’s mind about his integrity.

I urge my friends to go easy championing Donald Trump or Hillary Clinton or Michael Phelps or your brother-in-law as a convert to Jesus Christ until the evidence is in and the change in one’s life is obvious to all.