Home Features 6 Ways to Lead During Times of Chaos 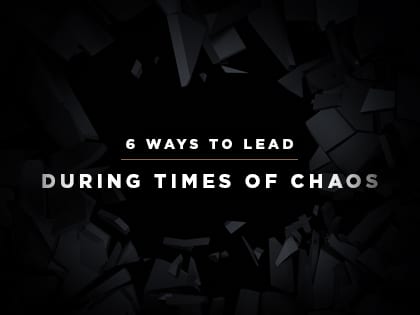 Phil Cooke: “When everything breaks loose, what’s the best approach for righting the ship?”

There’s a lot of media talk about the British government being in “chaos” as a result of the Brexit vote. There’s a lot of exaggeration there—after all, the media is about sensationalism, since that’s what sells newspapers and media advertising. But there’s no question that many companies, churches and nonprofit organizations experience times of chaos, and many times over the years, I’ve been asked to consult during these catastrophes.

During those times, I’ve helped them navigate through the storm. So the question becomes, how should leaders react during times of chaos? When everything breaks loose, what’s the best approach for righting the ship and getting the organization moving forward again? While each story involves complexity and time, here are my suggestions (and feel free to pass this along to our British friends):

1. Realize that the best leaders understand the business.

During times of crisis, everyone will step up with “advice,” and many of those ideas will be crazy. The best way to navigate the overwhelming tide of outside opinions and ideas is to know the business well. Know your team, and who’s the best in which roles. Know the organization’s structure and know how the business works. Industry, government, nonprofit, church—whatever it is, know it. Otherwise, you’ll be lost in the tidal wave of sincere but terrible suggestions.

Too many leaders freeze in a crisis, and because of the delay, and those organizations rarely recover. In the early days of a crisis, tough decisions have to be made, and I just might prefer making a wrong decision than no decision at all.

3. Keep the vision in front of the team.

Now more than ever, a powerful and compelling vision can inspire your team, customers and donors. But you have to tell the story, tell it well and tell it often.

Communicate to the team and to the outside world. No matter how bad things may be, never stop communicating. Find the influencers in the organization and let them help tell your story. Perceptions will be created from the information you share. As a result, know that you don’t have to share everything, but what you share needs to be the truth.

Many churches, ministries and nonprofits call me during a crisis, because they’re looking for advice on how others have handled similar situations. You need a bigger picture, so don’t be afraid to reach out to board members, other leaders and respected voices. They key is to vet your advisors, so you know they have the experience and know-how you need.

Everyone is looking to you for confidence and encouragement, so don’t lose your cool and don’t blow your stack. Keep your attitude in check—no matter how frustrated you may be. Don’t lecture people, don’t blow up and don’t freak out. To a great extent, your attitude will determine the attitude of your team, so keep your head up.