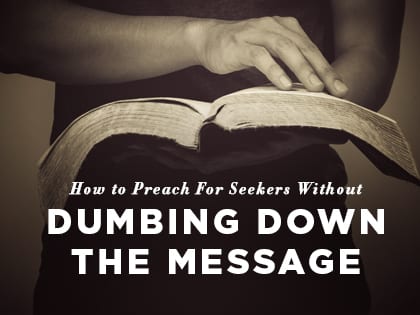 Ed Stetzer: “Preaching should be both theologically deep—and wide.”

In the modern era there have been a generation of preachers whose approach resembled the self-help inspirational talks of Tony Robbins. You could find titles of sermons such as, “Five Ways to a Better Life,” “Four Steps to Overcoming Fears,” and “Three Phases to Raising Obedient Pets.”

I’m just joking about the last one, but you get the idea.

Suffice it to say, some preaching was dumbed down (stripped of theological depth) to reach the dechurched or unchurched by offering pragmatic ways people could have a happier and healthier life.

It’s a good motivation, but the wrong application.

Related: How to make your sermon stick past Sunday »

I’m not saying that every attempt at preaching in a way that unchurched understand is dumbing down the preaching. I’ve written plenty on the value of seeker-comprehensible preaching. I’m talking about those who so simplify the message that it is dumbed down.

Some of these pastors believed church had become inaccessible or boring to those who were not attending; thus there was a need for creating an environment that was more accessible, understandable and—hopefully—meaningful.

At different times and places, such an approach did grow some churches.

For some, dumbing down the message resulted in churches that were, as the saying goes, “a mile wide and an inch deep.” The resulting shallow churches didn’t stop some in the younger generation from being captivated by the growth. Seeing the growth of many such churches—and elements that contributed to the growth—led many young preachers (or speakers) to trade theological depth for creativity, craftiness, cleverness and catchiness.

Don’t misunderstand what I am saying. I’m not railing against the contemporary church or the creativity they exhibited (though I foresee that in the comments).

I believe many had a pure heart and wanted to see many people come to know the Lord—and many did. I am just highlighting a potential weakness within that movement that still exists today.

It’s probably obvious I am not a fan of the dumbing-down approach. I firmly believe that one can preach to the unchurched (and dechurched) in a way that is both accessible and theologically rich.

I think we can make the preaching seeker-comprehensible without dumbing it down.

Putting the Cookies Up on a Little Higher [Theological] Shelf

I’m far from the world’s greatest preacher and teacher. But one of the things that marks of our church is that we put the cookies a little higher on the theological shelf. If teenagers can learn trigonometry and the intricacies of marketing and economics—and if people can go to Starbucks and order a triple shot, venti, soy, no foam, extra-hot latte, with two pumps of sugar-free vanilla syrup—then they can come to our corporate gathering and learn about propitiation.

Thus, when we do put the theological cookies up on a higher shelf, you may need to provide a stepping stool, or what I refer to as an “on-ramp” for unbelievers or newer believers to reach the topic.

By not dumbing down the message, both the unchurched and churched learn and grow, and one of the greatest lessons they learn from aiming high theologically is that Jesus is both accessible and demanding.

A Growing Shift from Shallow to Deep

A few years ago, Willow Creek Church researched to see how well they led people toward spiritual maturity. They discovered they had been successful at reaching the unchurched and the newer believer; yet they were less than successful at leading believers towards maturity. One-fourth of those who classified themselves as “close to Christ” or “Christ-centered” noted they were either “stalled” in their spiritual growth and/or dissatisfied with the church. From their study, they made some adjustments to make depth a part of their spiritual maturation.

A while back, I sat down with Craig Groeschel, pastor of Life.Church in Oklahoma. I asked him what has changed about his preaching over the years. He explained that, to preach to the unchurched, he had to start preaching deeper because even the unchurched want deeper content.

In other words, those for whom sermons were being dumbed down aren’t dumb. They are interested in the truth or else they’d be out golfing.