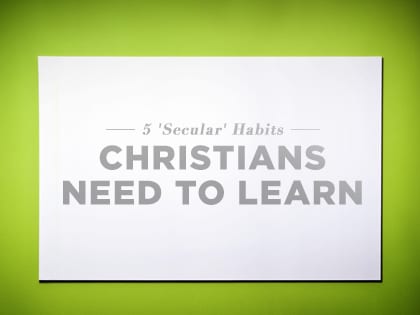 Phil Cooke: “One of the big reasons we’re losing our voice in today’s culture is that we don’t understand these critical habits.”

I say “secular” because, for many reasons, Christian culture looks down on them. These habits have not been considered traditional Christian behaviors. But one of the big reasons we’re losing our voice in today’s culture is that we don’t understand and master these critical habits. Here’s the list:

Old Testament prophets and early church leaders weren’t afraid to call people out. When it comes to the gospel, the stakes are too high to settle. Paul trained Timothy to be gracious and firm. It’s time we go back to raising the standard in our behavior, our commitment, our attitudes and our excellence. Be gracious and be loving. But when evil happens, or a brother’s behavior is out of line, we can’t be afraid to confront.

Speaking the truth invariably creates conflict because someone won’t like it. So we have a choice—either stand up or shrink back. We don’t have to be jerks or control freaks. But there are times when we do have to be bold. Just ask the Christians who are being persecuted in the Middle East. The Bible says that “iron sharpens iron,” but that only happens when the two pieces of iron slam against each other.

We’ve really messed this one up. When the Bible talks about judgment, it’s talking about people, not behavior, quality of work or results. We can’t possibly judge the motivation of someone’s heart or his or her standing before God. But can absolutely judge external results. In the false name of “not judging” we’ve allowed employees to do shabby work, projects to be ineffective and doctrine to be compromised. Perhaps most of all, we’ve allowed pastors and Christian leaders to disregard moral standards without reproach, which erodes the church’s moral authority within the culture.

Obviously, in all of these areas you can be extreme and exhibit negative behaviors. But just read the Bible to see how each of these areas was mastered in ways that allowed people to follow God’s call and accomplish great things.