Home Features Reducing Global Poverty, One Camera at a Time 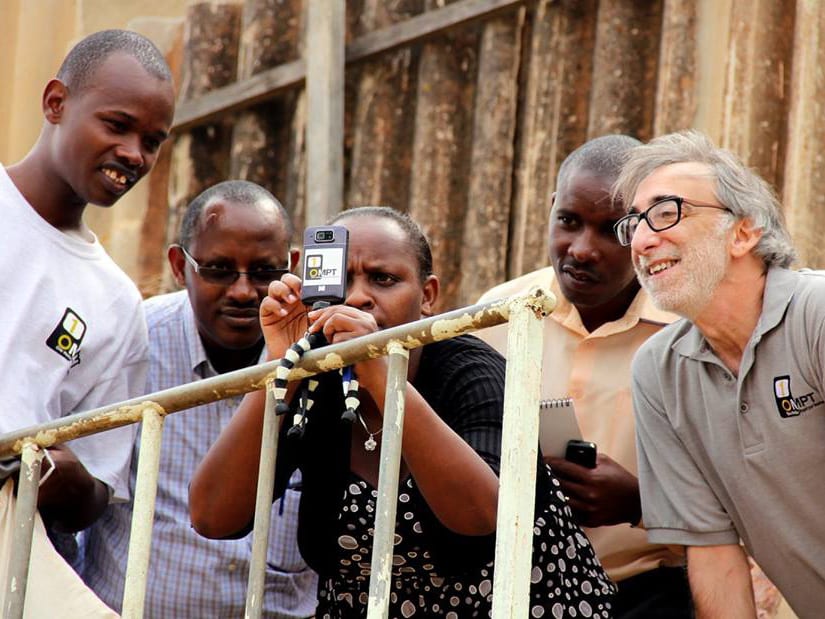 Non-profit One Mobile Projector Per Trainer delivers life-saving messages to some of the poorest countries in the world.

A young man on a motorbike winds through the narrow trail as quickly as a native wildcat. He has made this trip before, but this time he carries a critical package. He glances back occasionally to make sure the satchel is still secure on the cycle’s rack. He follows with a quick look down to make sure the alligator clips are still connected to the cycle’s battery. A flick of the wrist and he zooms on to the small group of huts just beyond the tree line.

His approach has gained the attention of most of the village and he’s greeted by a trio of old men, the elders of this primitive tribe. A short discussion in their native tongue and the elders bring the man and his package to the largest hut in the village. They agree to gather the tribe at sunset. In the meantime, the young man checks the contents of the package. Nothing has been damaged and he begins to set up.

Darkness descends quickly upon the valley. The visitor is ready to address the assembly that has gathered, but they wait until all have arrived. On cue, he presses a button on the tiny projector and a gasp goes up from the small crowd. The hut is flooded with a dim light. After a few moments of introduction, he presses play. The entire village sits mesmerized by the images. A woman on the screen, speaking in their own dialect, warns them about an epidemic in their region called Ebola. She tells parents how to spot the symptoms and what to do if they think their child has the disease. Most of this tribe has never seen a video, and this message leaves a lasting impression.

This scene is being played out in several of the poorest countries around the world thanks to an organization called One Mobile Projector Per Trainer (OMPT). Their goal is get video training and tools into the hands of agencies that have critical messages for people in low-technology areas of the world.

Matt York, the founder of OMPT, says the fine line of poverty is often measured in information.

“There is, unfortunately, too significant a percentage of people in the world that are living on too little,” Matt says. “We have a billion people in the world that are not making progress and are slipping further into poverty. They might just need a simple message about a minor agricultural or hygiene practice. They may only need to make small tweaks in how they behave to increase their quality of life.”

Matt spent many years in video production and is the founder and publisher/editor of Videomaker magazine. He is a Christian who affirms he had a strong pull to do something significant with his talents and resources.

“I really felt that deep call to not continue to build wealth, not to continue to seek more comfort, but to find a level of sufficiency and recognize my abundance,” he says. “I would then devote my surpluses, which is really my time and my treasure, to aiding those who are trapped in poverty.”

Matt says that each of us should evaluate our faith life.

“I think that more Christians need to be activated—not just reading it and praying about it and studying it and telling people that you know it,” Matt says. “But actually living it out.”

This burden led Matt to evaluate how he might use his video production background to help people in developing nations. At first it seemed like there was a disconnect. How can you use this type of technology in a place where there is no electricity and no access to the Internet? He began to pray and seek opportunities to connect with nongovernmental organizations to find out how they could partner with him. He began OMPT as a non-profit organization, and within a few years they have grown to have missions in 10 countries.

Last year, OMPT went to Senegal after the Ebola virus became an epidemic.

“We worked with the Catholic relief services,” Matt says. “They needed to convince people that if your child is sick and has a certain set of symptoms, they might have contracted Ebola. You can’t take care of your child. You must take them to local authorities.”

The organization needed to create a video to reach parents with this vital message.

“We conducted a workshop in a rural area. We trained the staff members to make the video,” Matt says. “They made the videos themselves, after we left, and they kept making them.

“That’s the organization’s ambition. You want to make a dozen videos and then show the messaging in these rural areas where health care workers rarely get a chance to go.”

After the videos are made, members of OMPT transport the projectors to remote places. Matt says they’ve found that showing videos can have a much greater impact than westerners coming in and giving that same message.

They often use cell phone cameras to save on the cost it would require to purchase traditional cameras. They also install video editing apps on the phones so that the entire production process can be self-contained. To project the images, they purchase pico projectors that are about the size of a cell phone. Solar panels and vehicle chargers keep the equipment charged and ready for use.

How You Can Help

OMPT is always accepting donations, but they also need skilled volunteers. Part of OMPT’s process involves what they call “videomakers without borders.” These are production people who raise their own support and go with Matt and the team to these remote regions. The volunteers work together with local translators to conduct a four-day training session. At the end of the training the team distributes the equipment to a local charity group that spreads out to create and distribute even more video messages.

If you would like to find out how to put your tech skills to use, go to OMPT.org/take-action. There, you will also find more stories of how Matt and the team are taking technology further, into areas of the world where these messages can literally save lives.