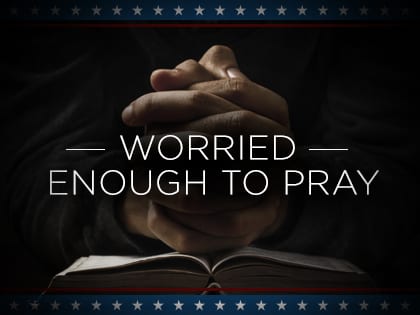 The premise was a simple one. Shouldn’t a presidential candidate who claims to be a Christian talk like one? When a candidate waves a Bible in one speech and calls a reporter “bimbo” in the next, isn’t something awry? Specifically, when Donald Trump insists that he is a Christian (“a good Christian,” to use his descriptor) and then blasts, belittles and denigrates everyone from Barbara Bush to John McCain to Megyn Kelly, shouldn’t we speak up?

If a candidate is not a Christian, then I have no right to speak. But if the candidate does what Trump has done, wave a Bible and attempt to quote from it, then we, his fellow Christians need to call him to at least a modicum of Christian behavior, right?

Again, I struck a nerve. More than three million of you read the article in the first 36 hours! Thousands of you weighed in with your comments. They were fascinating to read. (Not all of them were pleasant to read, mind you. The dozens of you who told me to stick to the pulpit and stop meddling in politics—I get it. By the way, I’d like to invite you to attend our services. My upcoming message is called “Kindness.”) Detractors notwithstanding, your comments were heartfelt and passionate.

I detected a few themes.

You have a deep sense of love for our country.

Patriotism oozed through your words. You cherish the uniqueness and wonder of the U.S. You have varying opinions regarding leadership style, role of government and political strategy. But when it comes to loving the country, you are unanimously off the charts.

From Outreach Magazine  How to Lead Change in the New Year

You have an allergy to “convenient” Christians.

You resist people who don the Christian title at convenient opportunities (i.e., presidential campaigns). You would prefer the candidate make no mention of faith rather than leave the appearance of a borrowed faith that will be returned to the lender after the election.