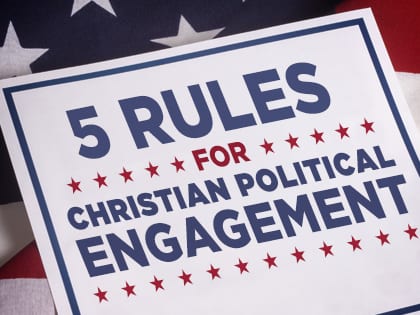 “Our first loyalty is to Jesus and his kingdom—not to any political party.”

What does faithful political engagement look like as Christ followers in the midst of the divisive, harsh and acrimonious election year in which we find ourselves in the U.S.? My concern is that we not allow the world’s pressure to form us, but rather that we respond in a way that reflects and honors Jesus.

In 1981, I spent three months in the Philippines during a time when the church found itself divided over the increasingly repressive dictatorship of Ferdinand Marcos. Some Christians vigorously opposed the government and were on the streets protesting and going to jail; others supported Marcos wholeheartedly. A few others had decided to take up arms (taking their cues from the insights of liberation theology).

While the environment was fiercely anti-American, I was blessed to be visiting as an InterVarsity Christian Fellowship staff worker and to listen in on their theological reflections in the midst of their highly charged political environment. It was life changing for me and has shaped me to this day.

Here, I offer a few of the insights God gave me through our Filipino brothers and sisters wrestling together in creating a biblical response during a time of great crisis. These insights can be summed in five invitations to us, as American Christians:

We must speak for those who cannot speak for themselves and bear witness to the issues on God’s heart. God has a passionate concern for the poor and marginalized, the unborn, the aged and the physically and intellectually disabled. So must we. Racism and injustice diminish human beings made in God’s image. We advocate for just laws, opportunities and systems. Care for the planet, working for peace and strong support for biblical, healthy marriages between men and women are on our agenda, as well. You can add to this list.

We must love all human beings, and we are called to bless and affirm that every one is made in God’s image. So we don’t participate in gossip, name-calling, slander and murder with our tongues. We seek to be a good gift to others as people who have been deeply loved and forgiven. So, in our discussions with others regarding difficult and controversial issues, we aim to season our comments with grace and generosity.

God commands us to pray for those who are in authority over us—regardless of their political views—that they might be filled with wisdom and they might experience God’s blessings. So we must discipline ourselves to actually do that, inviting others to join us in that process.

We invite people to not fear, offering a global, historical and biblical perspective. “Things have never been worse,” a person recently told me, his voice filled with fear and angst. That is simply not true. World War II was worse (almost 60 million people died). So was World War I. Imagine living through, for example, Stalin’s purges that killed millions, the Cultural Revolution in China or the Black Death that killed one quarter of Europe in the 13th century!

Our God is the Lord God Almighty. History is in his hands. We can rest in him.