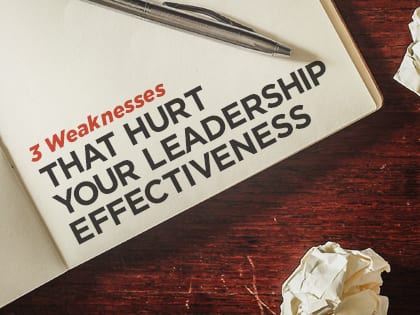 “One common denominator of weaknesses is that leaders are embarrassed to admit them.”

I just met a guy who does 150 pushups every morning.

Understand what I’m saying: He does 150 … with no break! That is insane.

Now I love to workout, am pretty fit and have a solid pushup game. However, I admit that I cannot keep up with my new friend.

My new friend’s strength got me thinking about areas I am equally tough. It is usually because I focus on them at the gym. Conversely, I have things I do not work on that have become weak spots physically. My lack of attention has allowed them to become a struggle.

Weak spots go beyond just the physical. Life is peppered with inadequacies. Leadership is not excluded. Every leader has struggles. It is a part of what reminds a leader they are also human. No matter how successful or seasoned, every leader has at least a handful of nagging problems.

One common denominator of weaknesses is that leaders are embarrassed to admit them. We feel like these issues may disqualify us from leading. We work on them, we cover them up—but we rarely own them.

Today I want to share with you some of my major struggles as a leader. I will confess, this is a bit more transparent than I am comfortable being. I heard years ago that “isolation leads to devastation.” So my hope is that peeking behind the curtain of my insecurities can help you bring your own into the light.

1. Fear of Being Viewed as a Fraud

I grew up in a small town, still possess a blue collar mindset, did not finish college until I was 36 years old, have zero pedigree in ministry, and one leader I worked for told me that I was not a good communicator. While I am not embarrassed by those things, I am often haunted by them. They drive fear in my heart.

From Outreach Magazine  The Best-Kept Secret About Leadership

The danger is in how I allow fear to rule me. Fear of being exposed as a fraud paralyzes me from being all I am created for.

A friend recently pointed this blind spot out to me. There is something inside of me that deeply fears letting people down. I do not mind making difficult decisions, having really hard conversations or even firing people, but disappointing someone who is counting on me is more than I can stomach.

This leads me to be a rescuer to those I lead. When they face obstacles I often try to fix their issue or solve their problem. In my mind this is helping them. In their mind, I am not trusting them to solve the problem on their own. It limits my leadership.

What is worse is how I respond to some people I am not leading. Often when there are people who are needing an answer from me and I know I have to tell them “no,” I will just avoid them. In some cases I have completely vanished and made myself impossible to contact. I have not answered emails or phone calls. I know that is ridiculous. It is humiliating to admit. When we allow blind spots to go unaddressed they become character flaws. I have had to repair damage done to my character because of it.

I never make a decision that I do not second guess. Over time I have learned to cover this up. One cover up I use is bulldozing people at times when they disagree with a call I make. Another was I compensate is by following up strong statements by asking, “Know what I mean?” Many leaders mask insecurity by posturing themselves as “decisive.”

From Outreach Magazine  Loving People Who Need It Most

Where this hinders me is I delay making a move out of fear of being wrong. Sometimes I have waited months to pull the trigger on something both me and others knew was right. My team begins to question what I value and if I have the guts to do make tough decisions. Second guessing yourself can lead to others second guessing your credibility.

So, what do we do? You may find commonality with my issues. They may make you feel better about yours! Certainly you have struggles of your own. We cannot deny or outrun them. They are always there.

Find the courage to overcome your weaknesses by doing two things. First, own them. Quit denying them. Others know about them. If you do not think you have struggles, ask the most honest person you know. Emotionally own that you have some struggles that may embarrass you and may hold you back.

Next, tell someone. Now, don’t go tell everyone on your team or start posting about it on Facebook. No. Tell a couple of friends. Ask for help. Establish accountability. There is power in confession.

Kevin Lloyd is the executive pastor at Stevens Creek Church in Augusta, Georgia. This article was originally posted on Lloyd’s blog, LeadBravely.org.