Home Features The Sarah Connor Guide to Leading the Church 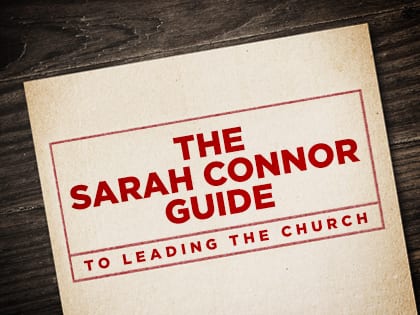 “‘Leadership’ is the new wine that the church has become drunk with, substituting it for the pure power of the Holy Spirit.”

A red laser scope pinpointed the forehead of an innocent random Sarah Connor in a Midwestern town who ill-fatedly shared the same name as the future mother of the world savior, John Connor, in The Terminator. After narrowly escaping the T-800 robot assassin, flash forward to a pumped, ripped, lean-mean-terminator-fighting-machine. In the years that follow her narrow escape, Sarah Connor devotes her life to prepare for the coming apocalypse.

It’s the logical thing to do …

But everyone thinks she’s crazy.

Being a Christian leader today has many similarities. For one, we know that all of this isn’t going to last. Just like Sarah Connor’s recurring vision of an incinerated playground, one day she knows that Skynet is going to detonate an atomic bomb.

We live in an age of the church where there are very few people getting ready for what’s coming. I wrote Church Zero (David C. Cook, 2013) as a prophetic alarm clock telling the church to wake up. Even Paul told the Ephesian church that now was not the time for sleeping, but to be alert, because the night is coming—soon. He tells them to “be careful how you live, not as unwise, but as wise, making the best use of the time, because the days are evil” (see Eph. 5:14-16).

Church Zero utilized many ’80s and ’90s pop culture references, not, as some think, because I’m old. It was an intentional artistic and literary stroke to illustrate that the church is relying on the methods and approaches of 20 to 30 years ago. The only problem is that we aren’t living 20 or 30 years ago, nor do we have the luxury of living in yesterday’s spiritual climate. The storm clouds are gathering and we’ve been called to tackle our own Skynet.

So how do we save the world like Sarah Connor?

We prepare by anticipating tomorrow. We equip ourselves for tomorrow, today.

There are three ways that Sarah did this.

Sarah Connor believed when all else doubted.

The ironic opening of T2 sees Connor in a psych ward, even though to the viewer’s eyes she’s the only sane one on the planet. She alone knows what’s coming tomorrow, and her vision drives her to prepare while everybody else is carried about by their blissful ignorance of mundanity.

Hebrews 11 lists the heroic acts of people who, like Sarah Connor, did not wait idly by, but took a stand against the machine of various empires and religious systems, knowing and believing their God would be valiant to perform great exploits. Even though Daniel prophesied there would be a 400-year period of silence, in the darkest of times, they were heroes who believed what God had said and pulled off the impossible because …

When we watch Sarah Connor in the psych ward she’s pounding pushups and pull-ups in her cell to keep in shape for the coming war. She stayed tough. She made sure that she could wield a machine gun, handgun and her fists. Just like Batman, she trained in every known martial art and in explosives and schematics. She stockpiled weapons in the desert and continued to train. She reformed her mind, spirit and body in anticipation of the war that she knew was to follow. She had a glimpse of the future and it ruined any chance for normalcy in her life.

She knew her time would come.

So did Joseph in Pharaoh’s prison. So did Moses in the wilderness. So did David on the run from Saul. So did Daniel as an unknown yet obedient student in Babylon. So did Paul for 12 years in Arabia and Tarsus.

All of them prepared and trained themselves spiritually.

Sarah Connor refused to become fat, lazy and complacent. She refused to let ignorance of weapons, explosives or technology be an excuse. She knew that she had a part to play. She knew that the sleeping world depended on her, and that she’d one day be called upon to make her stand.

You only have to be involved in one exorcism to know it’s no longer time to mess around. You have to be in shape. You have to be ready. You realize that you must study the Scripture for insight, pray for power, and fast in weakness for greater anointing.

Revival comes to those who labor, sweat, fast and pray during the “silent years.” They are those, who like Elijah, pray for rain during the years of drought. They are categorically out of place, like prophets born out of due time. They pray when they see nothing on the horizon, in anticipation of seeing a cloud the size of a man’s fist.

God is going to move. Skynet is coming. Even as the postmodern, post-Christian, post-Evangelical atmosphere encroaches, plunging America further into a dark age, the forces of evil are not idle. The new atheists continue to make converts, and the church continues to drift farther away from the ancient ways.

Supernatural power is unheard of in this age when “leadership” is the new wine that the church has become drunk with, substituting for with the pure power and presence of the Holy Spirit. The absence of discussions of prayer, fasting, miracles and being filled with the Holy Spirit is at an all-time low. Yet, when darkness rushes in like a flood, the Lord will raise up a standard to oppose it.

Will you be part of the underground resistance in the spiritual realm? Will you be in shape to fight what’s coming?

“Men look for methods. God is looking for men.” —Anonymous

This kind of talk is not popular. It’s not going to make it into most pulpits, Christian magazines or popular conversation. It’s seen as extremist and strange. It’ll get you locked up in solitary confinement and make people want to shove a needle in your glutes.

The prophets were all crazy. Weren’t they? Everybody thought that they were talking crazy … going too far … and then it happened. Wake up, before it’s too late.

Believe, train and stay focused—because if you want to save the world tomorrow, you’d better start getting ready today.

As Paul said, “Let us not sleep as others do, but let’s remain awake, and stay vigilant.”

Peyton Jones is a veteran church planter, founder of the New Breed Church Planting network and author of Reaching the Unreached: Becoming Raiders of the Lost Art (Zondervan, 2017).