Home Features On the Path to Discipleship 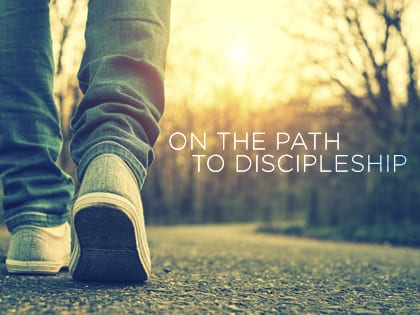 Ed Stetzer: “A path, a discipleship process, is necessary in order to ensure effective life change of believers within a congregation.”

Which strategy is the golden key to effectively making disciples in your church? How can you ensure people are on the path to discipleship?

I’m not sure there is one singular strategy, as many approaches can work. But I have realized that something is better than nothing. Creating a pathway for discipleship is necessary. Once you’ve decided to take that step, there are a few important aspects to consider when determining the most effective discipleship strategy for your church.

I have learned the best way to make a disciple is to actually engage in a number of different disciple-making practices, and from there decide what is most effective within one’s own context. One approach that intrigues me is from Joey Bonifacio, a pastor at Victory Manila in the Philippines. He has written a book called The Lego Principle, which describes their strategy. They work through a flexible discipleship track that seeks to engage people in a variety of ways.

Large Setting
One step in the process is a large group setting where the Bible is heard through teaching and preaching. Their discipleship track is more than Sunday morning, but “Victory Weekend” is part of it, as a time of larger group exhortation to deeper discipleship.

One-on-One
Then they form people into pairs (using an app they have developed) for a time of one-on-one discipleship. In the Transformational Discipleship study, LifeWay Research found that someone who has been discipled is over seven times more likely to disciple someone else. It’s like a positive chain reaction.

The one on one aspect of the discipleship process at Victory Manila works in tandem with their small groups. This helps create consistency and continuity, as the people who have gone through the process know how to bring in their friends and start them on the discipleship track.

Small Groups
Small groups are the ongoing repositories for discipleship-making experiences. Small groups are a versatile platform in that they are not only information- based, but they are also ministry-based and mission-based. Small groups are quite remarkable spaces that facilitate genuine life change, and empower those being discipled to make more disciples.

The discipleship strategy Victory has chosen to implement involves gathering in a large group, being paired for one-on-one discipleship and space for small group discipleship. Victory has brought clarity and flexibility to their discipleship process. This clear pathway, which all of the people follow, allows the next generation of disciples to quickly become disciple-makers themselves. This is why every church needs a pathway.

In too many churches, people wander around because there is no defined pathway to follow. A path, a discipleship process, is necessary in order to ensure effective life change of believers within a congregation. People need to know a path to work in order to grow with other believers in your church.

Most churches should work toward a pathway similar to Victory’s: one that is straightforward enough that people understand it intuitively, but with flexibility that enables people to adapt to the leading of the Holy Spirit and the needs of the person being discipled. The discipleship culture and process is so clear that it allows flexibility without detracting from the process.

With this type of culture in place, a church’s process should include some form of a large group gathering where people have the opportunity to hear the Word together, one-on-one relationships that flow out from the large group and ongoing small groups where life is lived together. Those three elements make for a holistic and effective discipleship strategy.

The exact details of your chosen discipleship strategy would need to take your congregation’s context into consideration, being sensitive to your people, their learning style and how they respond to different approaches. This may take time to identify, and a bit of trial and error would not be a bad thing.

Stick with what works and move on from what doesn’t.

A discipleship strategy plays a vital role in aiding the growth of a church, both spiritually and numerically. A clear discipleship pathway will enable your congregation to move forward in their own spiritual development. And as they grow to fuller maturity in their faith, they will be empowered to carry out the Great Commission themselves, making disciples of all the nations, even to the ends of the earth.

Victory Manila was founded in the university belt of Manila and today has more than 130 services in 15 locations each week, with over 78,000 attending on an average weekend. But the most significant part of Victory is it has more than 10,000 small group leaders who are focused on this discipleship pathway, leading to exponential growth.

Your church is almost certainly not as large as Victory Manila, but it probably has small groups, leaders of those groups and a desire to make better disciples—and that’s a good place to start your discipleship pathway.