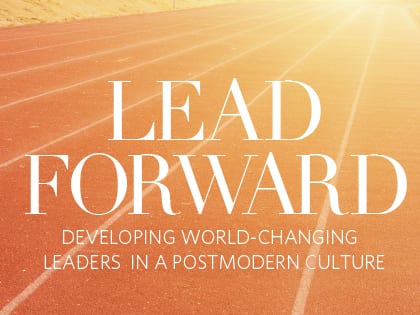 “Each generation comes with its own spiritual question. Ignore this question and you will sideline their passions.”

In 2004, the American 4×100-meter relay team strutted into Athens Olympic stadium with heads held high. They had good reason: the American relay team had won the gold medal every time they had stepped onto the Olympic track except for a silver medal in 1996, a couple of disqualifications in 1960 and 1988, and the boycott of the 1980 games. Otherwise, they were always victorious. At these particular games, they had won five of six medals in the 100-meter and two 100-meter sprints. This race was theirs to win.

When the starting shot sounded, U.S. runner Shawn Crawford blazed from the blocks to an early lead and passed the baton to Justin Gatlin, the world champion of the 100-meter sprint. As the world’s fastest man approached Coby Miller, the efficient machine of the U.S. relay team broke down. Miller could not hear Gatlin call “stick” over the noise of the crowd and slowed down to avoid disqualification by running out of the exchange box. In addition to the sloppy pass, Gatlin also stepped on Miller’s shoe with his track spikes, ripping a hole. By the time Miller handed the baton to Maurice Greene, Great Britain’s Mark Lewis-Francis had a huge lead. With tremendous speed, Greene almost caught his opponent, but he ultimately lost the race by a hundredth of a second.

The history of Christianity is like a relay race with one generation of Jesus’ followers passing the baton to the next generation for over 2,000 years, so that over 2 billion people on the planet call themselves Christian today. Yes, in a grander perspective, the church will always remain and Jesus will be with his followers “to the very end of the age” (Matt. 28:19-20, NIV). But over the centuries, some baton passes were strong and helpful, while others plunged Christians into centuries of regression and apathy.

As American evangelicals, we may already be bumbling the pass. Over the 30 years from 1972 to 2012, the percentage of Americans who are Protestant dropped steadily from 62 percent to 48 percent, according to a 2012 Pew study. Another 2012 Pew study shows church attendance declining in percentage with each passing generation:

Instead of falling behind, how can American evangelicals develop the next generation of kingdom leaders? How can they run this relay “in such a way as to get the prize” (1 Cor. 9:24)?

Spiritual Question of the Day

I believe that each generation comes with its own spiritual question, directed at its primary concerns of meaning and purpose. I call it the Spiritual Question of the Day. If you ignore this question, then you’ll sideline their passions. Pass over their passions, and you won’t be able to motivate them to be world-changers over the long haul.

As we talk about generational characteristics, they are, of course, generalizations. Not everyone born within the given date will be exactly like everyone else in it. Consider these categories more like mindsets, even as some born in one generation may relate better to a different generation.

Still, an old Arab proverb seems to ring true: “Men resemble the times more than they resemble their fathers.” And these generational attitudes could give us a clue on how to develop effective Christian leaders today.

Boomers: What Is True?

For boomers, their Spiritual Question of the Day is: What is true? They grew up in a time when objective truth was something to be sought after, and when found would alter your life’s perspective and priorities.

To that end, spiritual conversations for boomers sought to prove that Christianity was based on facts and truth. Christians used logical and rational arguments to prove that the Bible we have is close to the one that was actually written, that the Bible’s statements could be verified scientifically, that Jesus actually walked on the earth, that he actually died and rose again, that the Christian faith could be reasoned with intellect and still be found on solid footing.

In the ’60s and 70s, when boomers were young adults, even the critiques against Christianity were leveled on grounds that it wasn’t true. The Bible itself went through the gauntlets of historical and textual criticisms. Religion was set against science: evolution disproved creationism. Basically, if you could prove Christianity as untrue, then it shouldn’t be believed.

From Outreach Magazine  3 Signs of an Immature Believer

Xers: What Is Real?

Xers, however, are the first fully postmodern generation, and thus didn’t value objective truth in the same way as their predecessors.

As an xer in college, I remember watching an evangelistic event flop before my eyes. We had invited a national-renowned apologist to stand his ground on the student center steps of our elite university. He took questions, and yet would respond with belligerent, although intellectually satisfying, answers. His tone, however, undermined his message: his intent was to make others’ arguments faulty and fallible, but then he came off as a jerk. He may be saying true things, but his life, at least on this stage, didn’t seem to project love and grace. I found myself being more sympathetic to the questioners than to the answers.

We, as xers, cared less for intellectual treatises. In fact, we don’t trust these so-called rational arguments. We inherently squirmed when presented with an air-tight case. It’s great that it works for you, but it doesn’t work for us. Instead, we wanted people to be authentic and real, so that we could trust you. Otherwise, we didn’t want to hear what you had to say. Our truth wasn’t objective, but more personal and relational.

For xers, I believe that the Spiritual Question of the Day is not What is true? but What is real?