Home Features Teams That Thrive and the Obstacles That Hinder Them 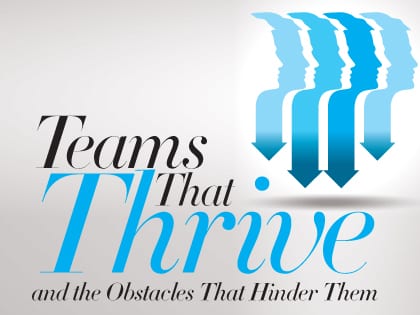 “Sure, efficiency is often useful, but great teams aren’t necessarily efficient. Rather, they are effective.”

Thriving churches are led by thriving leaders. Not one leader but many leaders. And not just by a group but by a team—there’s a big difference between the two.

If it’s true that everything rises and falls on leadership, then it’s worth examining who—beyond title—is actually leading your church. Who influences others on the team and throughout the staff? Who is being followed? Who establishes vision and direction? Who develops other leaders? Who truly shoulders the main decision-making responsibility?

Every church has some form of senior leadership at its helm. If it’s a group rather than an individual, who is in that group, and why? What exactly are they trying to do, and how could they become more effective at it?

Name and Define the Team Leading Your Church

Consultant Tony Morgan suggests that a church leadership team is “the team of leaders that usually includes the senior or lead pastor and the group of leaders that oversees the day-to-day operations of the church.” These teams go by many different names. Some are generic like lead team, senior leadership team, senior team, executive team (or exec team), directional leadership team, management council or senior staff. Some have a simple handle like “all the directors” or “all the pastors” or “all the elders” while others need special explanation because they’re a unique, carefully designed configuration. Some are subgroups of a board and thus have names related to that group such as the executive team of the elder board or governing board (which typically meets more frequently than the full board). Some are very informal in their name, such as pastor’s team or the kitchen cabinet.

In smaller churches the teams are typically made up of mostly volunteers plus a pastor or other staff such as the pastor’s administrative assistant. As a church increases in size, the senior leadership team often draws only from staff members. In even larger churches it’s typically certain members of the executive staff. Like team membership, team names vary considerably.

Every Tuesday at 10 a.m. the staff and select volunteer leaders gathered in the pastor’s office. After he arrived, usually late and without apology, he asked for personal prayer requests, had someone pray and then asked each person, “What do you have?” Sometimes it was information that everyone should know, sometimes it was a problem to be solved, and sometimes it was a statement that the person needed to talk about—a situation after the meeting, privately with the pastor.

On paper, this group seemed like a caring, involved team. In reality, everyone knew that their information mattered but not their opinion, that the pastor would make all the decisions himself, and that the only people who truly had his ear and could challenge his choices were his administrative assistant and the assistant pastor. All others who disagreed with him were put down verbally or described behind their backs as disloyal. Though the team led the church on paper, in reality the lead pastor held tightly to his role as singular leader.

The more you can clearly identify who provides actual leadership at your church, the better you can explore what it’s truly accomplishing—including questions like whether the group is the best size, uses the best meeting strategies or involves the best people for what you actually need.

Identifying your actual leadership “team” might not be as simple as you think. Too often the officially named group is not the actual leadership team. Sometimes no group exists on paper, but one does in reality.

On rare occasions, the leadership “group” is largely just one person.

Which of the following terms most closely describes how your church is led? You might pick more than one option:

• Organic/informal. Your leadership team is informal, perhaps not even identified as a team. A large number of people have access to the pastor, and all of them feel they are organically influencing the big picture at some level.

• Fluid. The leadership team seems to change month-to-month, and sometimes even day-to-day. If people are needed for their expertise or relevance, they’re pulled into the decision-making circle. As new issues or circumstances arise, the makeup of the circle changes. Some would go so far as to say there is no fixed leadership “team” beyond the lead pastor.

• Inner-circle. A designated group is supposed to work with the pastor to lead, but in reality the pastor has a “kitchen cabinet” of just a few people who actually make most leadership decisions.

• Family-based. If two or more family members are heavily involved in the church’s top-tier leadership, a large number of leadership decisions occur at family gatherings, often over meals or in the pastor’s home.

• Better-halved. Whatever the designated leadership structure, the real person in power is the pastor’s spouse. Regardless of how thoroughly a decision is prepared and processed, if it doesn’t pass muster over pillow talk at home, the next day it gets voided, reversed or modified.

• Pastor’s staff. The team is formed by simply drawing a circle around the top one or two tiers of the hierarchical organizational chart.

• Senior pastor/executive pastor partnership. The top dogs run the show, connecting with each other regularly but often not inviting significant input from anyone else. Even if they do ask someone’s opinion, everyone around knows who the real power brokers are.

• Ceremonial. You have the right people with the right titles meeting regularly with a full agenda and constantly making decisions—but never about truly big-picture issues. This team is great at perpetuating the status quo, but no one has permission to raise tough or controversial questions. You’re called the “leadership team,” but you’re limited to keeping the train on the tracks rather than charting new territory.

• Cheerleading only. Your team focuses only on the good news of what’s going well. You thank God for your blessings and affirm the servants God used. Any feedback that seems negative, even if constructively intended, is unwelcome. Any challenge to the status quo is out of place.

• Advisory only. Your team discusses true top-level leadership issues but only in an advisory capacity to the pastor. The group rarely makes the actual decision; instead, the pastor alone weighs the input and makes the final call.

• First responders. Your team is mostly responsible to carry out the pastor’s plans. You gather to hear the latest idea, which often requires a drop-everything approach to make things happen on short notice. The team contains senior-level people, but they are more implementers than co-dreamers or co-deciders.

• Fire department. You meet primarily when someone or something is on fire. When crisis hits, you feverishly meet and extinguish the issue, only to quickly resort back to the status quo of day-to-day individual functioning, to the neglect of strategic envisioning.

• Leader’s support group. You use the word team without truly functioning as one. You look like a team from the outside, but the leader still calls all the shots.

• A thriving leadership team. Together your team truly leads your church. You establish and carry out vision, set direction, wrestle with thorny issues and come to conclusions, fight for unity, and model gospel-centered and mission-driven community for your staff and congregation.