Home Features Not Too Small to Plant 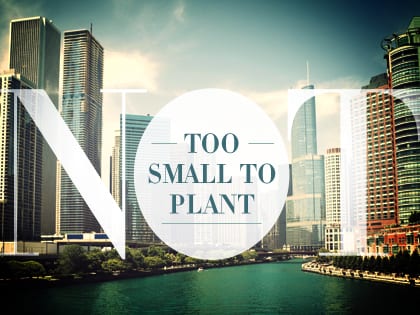 Mark DeYmaz: “Engage your community and God will establish a church that reflects his kingdom.”

For nearly 50 years, the American church has measured success by numbers, dollars and buildings. Like it or not, pastors know this to be true. Questions that begin with the words, “How many?” and “How big?” are ones we commonly face, must answer or otherwise discuss on a daily basis. Younger, less established or new-to-ministry pastors are the ones most likely to feel a pressure to perform in this regard. Similarly, pastors of smaller churches bear the burden of subtle prompts that often—though unintentionally—suggest their ministries are not as significant, noteworthy or instructive as ministries of those leading larger churches; that is, pastors who are most likely to be invited onto the main stage, to write a book or to address their denomination at the annual meeting.

But think about it: If large numbers are truly the measure of success, Jesus was a horrible failure. Sure, he did a few big events; but on a good day, he had, what? about 70 folks in attendance?

I learned a long time ago, numbers say something—they don’t say everything. In fact, for all the talk of launching big and growing even faster, I’ve come to realize that explosive growth more often than not leads to internal focus. This is why the very ones who Jesus looked in the eye and said, “Go … ” never went. That’s right. Peter, James and John, along with the rest of the apostles, stayed in Jerusalem. Why? Look, if 3,000 people came to Christ and joined my church tomorrow, our staff would be freaking out, “We don’t have enough parking! We don’t have enough nursery space! We need more bathrooms!”

From Outreach Magazine  What Changes When Your Attendance Breaks 200?

As a pastor, your value to the kingdom and community is not tied to the size of Sunday morning attendance. Nor is Sunday morning attendance the definitive size of your church. For instance, when answering the question of size, can I count the additional 1,400 people each month (350 a week) that attend our church on Tuesdays to receive three to four full days of meals a month? In other words, it’s not homogenous size on Sunday but breadth of community impact in a diverse community and kingdom influence throughout the rest of the week that is, in my view, a more significant measure of a local church’s success.

Here’s what Scott told me recently in discussing size versus significance:

“Jesus called the local church to advance his kingdom on earth as it is in heaven. Pursuit of this calling is not dependent on size or resources. We started New City with just two people, but we didn’t wait to engage our community or to plant other churches; we got on it right away. In the kingdom, what determines impact is not the size of a church but its determination to multiply.

“Early on, then, we adopted a neighborhood school to serve. We also began taking trips to the Middle East. By doing this, we established a concern for our city and a heart for the world at the core of our DNA.

“Through our involvement with the school, we started a Friday night program to help keep inner-city youth off of the streets. Soon, 60 to 70 young people, almost 100 percent African-American, were attending this program before we ever launched a Sunday gathering. When we did start on Sundays, the church was also predominantly African-American. I couldn’t have planned this: a white man moving from Texas into a gentrifying neighborhood in Chicago, planting and now pastoring a predominantly black church.

From Outreach Magazine  5 Tips to Survive Planting a Church

“Engage your community and God will establish a church that reflects his kingdom. Since his kingdom is multiethnic, so is our church.

“Also, from day one we developed a leadership training and releasing program. We prayed for God to raise church planters up so that we could send them out. In four years, we’ve planted churches in Chicago, Texas, New York, Ohio and India.

“When we get to heaven, I don’t think Jesus will ask, “How big was your church?” Instead, he will show us how big, broad and beautiful his kingdom is. This is why, though small in number, we engage our diverse community. This is why we expand the breadth of our influence through church planting. This is why I believe that every church, no matter its size, has been called and can advance his kingdom.”