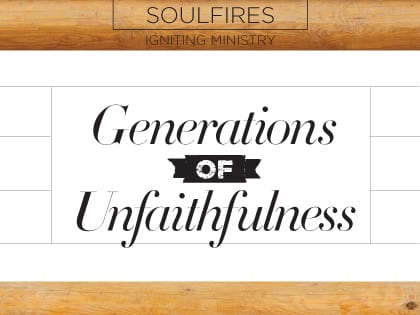 “Most pastors’ lives are so out of balance, they are susceptible to nearly every kind of temptation.”

“Come on in, Sweetie,” Joan said to Debbie, her 12-year-old daughter, while scooting over and making room for her on the bed. Debbie sat down next to her mom. Joan then asked in a rather soft tone, “You know Pastor Harold?”

“Yeah,” Debbie said, noticing that her mom’s eyes were red and that she held a rumpled tissue in her hand.

“And you know that we love Pastor Harold, right? And Marilyn and the kids too?” Her voice wavered.

Joan sniffled and touched Debbie’s hand. “You know how sometimes in life, you think things are going to be one way, forever, and then you find out … they’re not?”

Debbie looked at her mom more intently and saw her eyes welling up. “Yeah,” she answered slowly.

It took a moment for Debbie to take it in. “Well, where’s he going?” she asked.

In the next few moments, Debbie would learn that Pastor Harold wasn’t merely leaving the church, he had left his wife of 30 years, who also happened to be best friends with Debbie’s mom. Pastor Harold had also left his kids—best friends with Debbie and her siblings. He had run away with the church secretary, and in doing so, he ran away with much of what Debbie had built her life on. To her, Pastor Harold was the epitome of a Christian man, strong in his faith, stalwart in his commitment to Jesus, unwavering in his love for his wife and kids, and a pillar of the community. The news didn’t just hurt her, it crushed a large part of the infrastructure that made up her understanding of life.

Over the next 12 years, Debbie maintained a distaste and distrust of Christianity, and considered the church a mere gathering of hypocrites. In time, she met a handsome boy, Jim, who dreamed about flying and building a log cabin and she put her full faith and energy into his ability to make her whole. When Jim asked Debbie to marry him, she knew she had everything she needed for a happy life.

Soon after, Debbie’s mom and dad went out for a flight with friends on a clear day, in a plane piloted by her dad. After the radio tower warned of an approaching plane, they were struck by it in a midair collision. Everyone on board perished.

Two things happened immediately. Debbie forbade Jim from pursuing a career as a pilot; and she turned from God, even more resolute in her denial of faith. What good was a God who could be so unloving, so cruel as to take her parents?

Soon after the birth of Jim and Debbie’s first son Jack, a kind woman took a liking to their baby and began to ask to take care of him. Debbie was so struck by her generosity, that when the lady asked Debbie to attend a Bible study held in her house, Debbie didn’t feel right refusing.

From Outreach Magazine  Try This: Visit Nursing Homes and Prisons During Easter

After the Bible study one morning, the leader walked up to the regularly quiet Debbie and asked her point-blank, “Honey, do you know Jesus?” It was like being punched in the stomach. She knew the answer was yes, but for years she had treated God like nothing more than a nuisance—and if he was God, and she knew he was, that would never do. She fell to her knees and recommitted her life.

For Jim, a lifelong skeptic, it was a huge problem. The first couple of years of marriage had already been a struggle—now Debbie, in her attempts to get Jim to see the light, kept telling him that he was going to hell if he didn’t receive Jesus—that made it almost unbearable.

However, when their youngest son, Brian, made fast friends with another little boy named Max, it was a pivotal moment in Jim’s life. Because when Debbie became good friends with Max’s mom, Terri, they decided that the husbands needed to meet as well. This put Jim in the presence of Robert—who was a pastor.

Jim didn’t want to like Robert, but try as he might, he found him to be kind and disarming. When he went to hear him preach, he had never heard the Bible presented with so much love and relevance. Before long, Robert led Jim to Christ.

It began a golden era for both families as they became the closest of friends, sharing their lives, including the nurturing and serving of Robert’s church, which Jim, Debbie and family devoted their lives to. Within five years, Jim became an elder and within 10 years, he became the chairman of the board. Jim and Debbie’s marriage was going spectacularly. The church swelled to a weekly attendance of 9,000 and lives were being changed. They were happy times.

That is why it was all the more devastating when Robert took Jim to breakfast one morning to make a confession. He had been photographed by a private investigator, caught in a sexual encounter with a woman who was not his wife.

Jim was cut to the quick. Robert wasn’t just a best friend, he was the one who had led Jim to Christ. He was a central figure in the transformative moment that brought about a new understanding of love and devotion and commitment and faithfulness. He could not have been more blindsided. It was a slap to the face, a punch to the gut and a stab to the heart all at once. When Jim told Debbie, her response was much the same. She mourned for the loss of her friend and pastor, for the devastation to her dear friend, Terri, and for the kind of pain that Debbie knew all too well from her own childhood—the pain that her own sons were now experiencing.

As for the church, it was like someone rolled a bomb down the aisle. So devastating. The faces of the few people who continued to show up on Sundays were ashen. The pain and ruin was palpable.

The church asked Jim to become the executive pastor until a new lead pastor was found. He agreed. After a long search they found someone to help heal the past, but six months after the new pastor was hired and put in place, that pastor was also caught having an affair in his office with his secretary. Soon after, reeling from the shock and wonder of what was going on, Jim discovered his own secretary was having an affair with another associate pastor.

From Outreach Magazine  Now Is the Time to Make Changes

Jim took a hard look. He had to. What is it that makes pastors so vulnerable to this kind of sin when their entire calling puts them at odds against it? The more he looked into it, the more he found it was happening everywhere, all over the country. One thing was clear. Most pastors’ lives are so out of balance—with the crazy demands of the job and little time spent with their wives and kids—they are susceptible to nearly every kind of temptation.

The Cabin, the Failure, the Dream

After a lifetime of earning and saving, Jim and Debbie decided that it was time to make a break with their lives as they knew it. They wanted to fulfill Jim’s one remaining, lifelong fantasy of building a log cabin. They bought a plot of land on a breathtaking mountainside in the Colorado Rockies and began to hammer away at the dream.

Working away on the top of the cabin, Jim looked at the rest of the unfinished structure against the deep green mountainside with crystal blue skies above and felt in his heart that one day, the log cabin was going to be used for the glory of God—the God he knew would never let him down, though men might.

He was now 50 years old, and looking forward to the next phase of his life.

It was then, the cabin not yet complete, that his son called with sadly familiar news.

“I have something to tell you, Dad,” his son said. “The pastor of my church has just been found to be having an affair. The entire church is devastated.”

Jim walked outside and took a look at his beautiful perch high in the Rocky Mountains, along a river and under the biggest, fluffiest clouds he had ever seen. He thought about the three generations of his family that have experienced the pain of such bitter disappointment from beloved pastors who collapsed under the pressures of temptation. And that’s when he realized why God had given him such a desire to build a log cabin, and he knew exactly what he was going to do with it.

Jim and Debbie Hogan founded Standing Stone Ministry in 2011, where pastors and their wives were invited to the tranquil setting found at the Hogans’ mountaintop log cabin for one-on-one time with them. That early beginning was the impetus for what Standing Stone has become today—a ministry with a national reach. Each month between 1,700 and 1,800 pastors leave their assignments, most due to burnout or marital stress. Standing Stone is committed to caring for and serving ministry couples who need to be supported, understood and encouraged to find a unique balance for facing their unique set of challenges.