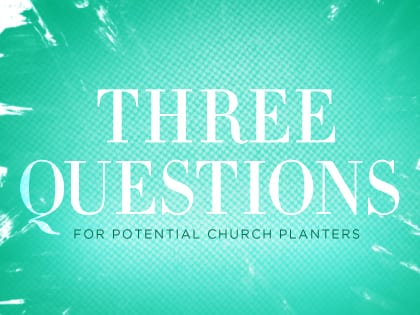 “The sending church misses out on the blessing of supporting a new work should they refuse to engage proactively.”

There are three questions every planter should ask him or herself before setting off to plant a church.

Question 1: Who Is Sending Me?

If only every church planter could have a sending pastor who launches them into the field with the force of a cannon. Unfortunately that’s not how it works. It takes the time to build a relationship with a man of God who has a heart for Jesus’ glory and a passion for kingdom expansion.

Because of this, some planters just go on their own without anybody propelling them out into the field. They are the ones that are talked about in hushed whispers at pastors’ conferences, “Some are sent, and some just went. They went.”

You’re going to make loads of mistakes in your church plant; don’t let the mistake of launching without the support of a sending pastor be one of them. You’re going to need the wisdom, support and encouragement of a sending pastor. You can’t see it now, but the days are coming when you will call him with your tail between your legs, and he’ll spiritually, emotionally and pastorally restore your soul.

My sending pastor regularly visited me in the field stateside and abroad. He acted as my confessional when I felt confused, alone or wanted to quit. His veteran wisdom and experience supplied vision in areas where I’d lost perspective. He bandaged up my wounds, loved me no matter what and inspired me to keep marching. He’s your medic and field chaplain while you’re charging the gates of hell. Lastly, for an overseas missionary planter, he gave me a home to come back to and a homecoming when I did.

The sending church is tempted to control the plant because if the plant fails, it reflects poorly on those who sent the planter. The sending church must recognize that they released the planter into the hands of God, and therefore no longer bear the burden of success or failure. If they fail to understand this biblically from the book of Acts, they will prove more hindrance than help to the planter. More than likely, the rules and regulations they impose will be the reason the church failed because of the way in which it stifled the planter and quenched the Spirit.

For every church that Paul planted, however, there was the backing of Antioch. He wasn’t a maverick or a lone ranger operating under his own authority. He’d been sent. In between each of Paul’s missionary journeys, he returned to Antioch as his mission station. Captain Kirk had the Starship Federation, Wesley was still an Anglican and Paul had the ordination from the risen Lord, the blessing of Jerusalem and the backing of Antioch. It’s crucial that you have the support of your sending church. After all, you’re going to be asking permission to “fish” your support base from out of their “pond.” Your sending church has the money, resources and manpower you need.

Question 2: Who Is Supplying Me?

Let’s talk about money. Michael Cheshire said it best, “Ah, the church startup and money. Seems so hard to get them in the same room.” Like Yosemite Sam rubbing the genie lamp, you will need some of “that green stuff.” First off, you probably aren’t budget priority number one for your sending church, but those couple hundred dollars a month they’ll give to you as a “missionary” can make the difference between success and failure.