Home Features Is It About Marketing? Or Reputation? 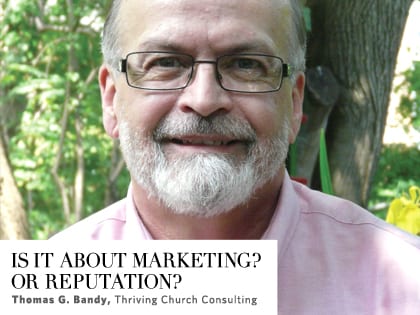 Thomas G. Bandy: “If you want to reach postmodern seekers, you have to think about reputation rather than marketing.”

You need to decide whether your real issue is about marketing or about reputation. The two concepts are distinct, depending on the people you most want to reach.

If you just want to reach churchy people (or people with church memories), then basic marketing may be sufficient. Place your facility in a highly visible, easily accessible location; provide lots of parking; surround yourself with illuminated, changeable signage. Identify yourself by your tradition, or use Christendom jargon for self-description: “Bible-Based,” “Spirit-Filled,” or franchised denominational slogans like “Open Hearts, Open Minds, Open Doors.”

Always bear in mind that churchy people are far more judgmental than ordinary people. They are more likely to judge or dismiss you based on appearance rather than substance. The “market share” of churchy people is shrinking rapidly.

If you want to reach postmodern seekers with little or no church memory, you have to think about reputation rather than marketing. These are the people who identify themselves as “spiritual,” but who don’t think that church membership or dogmatic formulas of faith matter much. Today in North America this “market share” represents as much as 60 to 80 percent of the public in most major population centers.

Reputation is based on three things: Zoom, Punch and Buzz. Always bear in mind that postmodern seekers are suspicious of religion, but far more prepared to explore something interesting.

means that your church has a reputation for constant, rapid, profound growth. Your church flies higher, goes faster, dives daringly, swoops creatively and glides on the wings of the Holy Spirit. It is an exciting group of people to be with.

This is why churches with a big reputation rely on video rather than still images on websites. Social media is especially useful to communicate “zoom.” If churches use print (to connect with target lifestyle segments that can’t afford or won’t do high tech) they never use just prose; they always use poetry, sing songs or tell stories.

Relationship and creativity mean far more than location and tradition. Postmodern people will go wherever they need to go, bypassing many more visible churches that have excellent signage and parking, to get to the “Zoom.”

This is why churches with a big reputation rely on the recommendations of mission partners (e.g., health care, social service, military, business and education sectors). Other agencies endorse them to their constituencies or thank them publicly. They also rely on testimonials from high-profile public figures (from sports, film, literature, science or political activists and social critics).

Social media is less effective here. Churches with a reputation for “Punch” prefer a magazine story, television or radio interview, or large public forum where they have more time to go deeper to describe their impact. A great still image by a professional photographer often captures “Punch” more effectively than a video.

A visible presence in the mission field, where the impact of the church is really being felt, is more important than any church building. The images you see are not of the church, but the outreach location. That is where you want the visitors, newcomers and potential volunteers to come—and from there they might then connect with worship occurring elsewhere.

means that your church causes a stir of conversation on Sunday morning (among the church membership) and during the week (among the general public). On Sunday morning, people aren’t talking about the weather and the weekend game; they are “buzzing” about what’s happening in and around the church. A buzz is also happening though the week. Strangers are hearing about “crazy, wonderful things” that are going on. People talk during their work break. Rumors fly. People spontaneously pull out the smartphones and follow a key word.

From Outreach Magazine  Should You Move to a 'Better Suburb'?

This is why churches with a big reputation deploy their board, staff and other ministry leaders out into the public. They spend little time in the office and meetings, and lots of time mingling where the public gathers. Strangers will nudge one another at the pub, point and whisper, “That guy is one of them!” And then go up and start a conversation.

Facebook is of far less value than Twitter or some other rapid-fire info sharing network. If the activities of the church cannot be conveyed in 20 words or less, written or spoken on the fly, then you don’t have enough “Buzz.”

Notice the difference between marketing and reputation. Churches that really want to reach people with church memories only need marketing. Indeed, if they try to develop a reputation for zoom, punch and buzz they may actually fail in their marketing strategy to reach churchy people. On the other hand, churches that really want to reach postmodern seekers never think about marketing. They just do whatever it takes to generate zoom, punch and buzz—and then let seekers seek them out.

I find that you can always get behind the rhetoric of a church—and discern who they really want to reach—by discovering whether they are doing marketing or building reputation.

Thomas G. Bandy is the president of Thriving Church Consulting.