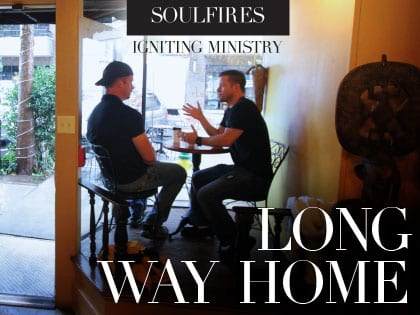 Through an unlikely friendship, two outcasts find a new passion for ministry and a new beginning in grace.

In the summer of 2013 when Ruth Graham Dienert read an Outreach magazine article about a church in Asheville, N.C., reaching the outcasts, she had a hunch. Calling Jay DePoy, pastor of Exodus Church, she asked if he would be open to contacting Graham, her prodigal son, a grandson of Billy Graham, who happened to be living in the same community. When Jay pursued Graham, none of them knew how far the margins of ministry would extend.

The first time Graham and Jay met was in a coffee shop in Asheville, a city in the Bible Belt where weird is the norm.

When Graham launched into an unapologetic tirade against the modern American church steeped in prosperity gospel, hypocrisy, spectacle and seven-steps-to-the-worst-life-ever mentality, Jay says he can’t remember him ever coming up for air.Instead of the expected defensiveness, Jay gave Graham a fist-bump.

Jay saw the look of surprise in Graham’s eyes.

At the time of their first meeting in the summer of 2013, Graham told Jay he was just weeks out from one his worst hangovers ever. He remembered waking up next to a beautiful woman he could not name, surrounded by empty fifths and traces of lines and lines of cocaine. It finally occurred to him: He could never get enough of what the world had to offer.

Stripped by the real estate collapse, Graham had lost his houses, a marriage, the boat, Mustang Cobra, and Confederate Hellcat.

Always taking pride in being a body builder with broad shoulders—the kind of guy who never cries—he told Jay he began to weep like a baby.

In desperate need for love and purpose, Graham returned to faith in Jesus.

Faith in the church—well that’s a whole other thing for Graham and Jay.

Over weekly coffee at Asheville’s World Café, Jay began to share his own ragged journey. Because of some self-destructive choices made while serving as pastor of a fast-growing Michigan church, Jay had served a few months’ prison time and two years probation.

From his church, he experienced exile to suffer the consequences alone.

After moving his family to Asheville in 2009, Jay began to look around the streets and wonder who was reaching the outcasts: the homeless, the addicts, all those who were spiritually disillusioned?

“I could personally relate to those outside the circle looking in, because I have been there. I’ve got a criminal record. I know what it’s like to walk with a spiritual limp. Jail has a way of humiliating a man and making him feel unwelcome at the table of grace.”

Following a time of spiritual retreat and repentance, he launched Exodus Church in January 2011 for the purpose of reaching those on the margins.

Jay explained to Graham the timing of his mom’s call.

“She had just read an article in Outreach magazine about an Exodus church initiative to find housing for a homeless veteran. She tracked me down and asked me to pursue you. Your mom suspected the two of us might get along well.” [That article, “Loving the Outcasts,” appeared in the July/August 2013 issue.]