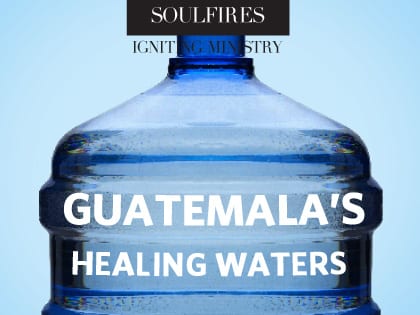 “People see it as a way God loves them when we bring them water.”

Even back in the days when he was a pharmacist, Salomon Hernandez knew what the problem was. As a pharmacy and laboratory business owner in Guatemala 25 years ago, he saw plenty of sick people in his community, and he prescribed lots of medicine and vitamins to help them get better. A government program was established to eradicate disease, and Hernandez’s pharmacy provided supplements—particularly to the vulnerable children.

But he knew the government efforts were missing the point.

“The children in our communities were millionaires, not in money, but in worms and parasites,” he said. “Despite all the vitamins and medicine and food we provided, we weren’t solving the problem.”

The problem was the water.

“The government can see nakedness and poverty, but it can’t see bacteria,” he said.

Hernandez lives in a small city called Chiquimulilla, in southern Guatemala, almost to the El Salvador border. People in his community once used river water for washing dishes and clothes, and for cooking and drinking.

“Even with the limited knowledge I had back then, I knew it didn’t matter if you gave people medicine, because they continued to use contaminated water,” he said. “That’s when God planted the desire in my heart to deal with the real problem—the water.”

The municipal water supply in much of Guatemala is unsafe to drink because the pipes delivering the water are porous and run close to equally porous sanitation pipes that carry away human waste. Bacteria from the sanitation pipes often migrate into the water system. In more rural areas, such as where Hernandez lives, the lack of adequate sanitation results in contaminated wells and rivers where the residents get their water.

Companies throughout the country sell purified water in blue 5-gallon jugs, but at such an inflated price that for some, the choice is whether to buy clean water or buy food. Boiling the water is an option, but only if a family can afford fuel. The result is that, in many rural areas, people are chronically sick. They miss work days and school days. Soon after they get medicine and solve one cycle of parasites, another cycle starts with the next drink of water. Many die.

A recent UNICEF report said that approximately 1,800 children under the age of 5 die every day from diarrheal diseases that are linked to water, sanitation and hygiene.

“If 90 school buses filled with kindergartners were to crash every day, with no survivors, the world would take notice,” the report said. “But this is precisely what happens every single day because of poor water, sanitation and hygiene. Sometimes we focus so much on the big numbers that we fail to see the human tragedies that underlie each statistic.”

The Centers for Disease Control and Prevention said that more children die from diarrhea-related illnesses than from malaria, AIDS and measles combined. It said that improvement of drinking-water quality leads to a 45 percent reduction in diarrhea cases.

After years of conducting business with his pharmacy and clinical laboratories, Hernandez said he sensed that God wanted him to change direction in his life. He believed God was telling him to become a pastor. He started a church in his home, and it grew. Then he saw something in another church that grabbed his attention.

The church in another city had installed a water purification system and was offering the same blue 5-gallon jugs of safe water at a fraction of the price charged by the commercial water companies. The church was also donating water to local hospitals and other churches. And every day, there was a line of people outside the church waiting to receive affordable, clean water.

“When I saw this I could feel in my heart that I could help the people in my church,” he said.

The church with the water system was working with a non-government organization in Denver called Healing Waters International. Hernandez immediately had a vision for not only serving the people in his community with safe water, but also for those in even more remote areas.

“My vision was for the poorest of the poor, for those the farthest out, the most vulnerable,” he said. He remembered those whose illnesses he had treated in his days as a pharmacist. “The poorest people have no access to clean water, and they are the ones with the most diseases.”

Hernandez contacted Healing Waters, and the process began for installing a system in his church with the idea that the water would also be delivered well beyond the church building.

“Pastor Salomon came to us and said ‘Help me achieve what I think God is trying to do,’” said Ed Anderson, CEO of Healing Waters. “He didn’t ask us for money. He asked for a partnership.”

In addition to becoming a source for pure, affordable water, the church became a center for training people in the community about safe hygiene and sanitation practices. Healing Waters provided the church with a biblically based community health curriculum, called a Holistic Transformation Model.

“Years ago, as we were developing a model to equip, educate and empower churches, we never dreamed that a pastor in rural Guatemala would believe in the model, catch the vision, develop and fund their own model for additional projects,” said Anderson. “This church is taking ownership and accountability, self-financing, investing in others and perpetuating the ministry.”

Healing Waters, which started in 2002, started 40 new water projects in 11 countries in 2013, mostly in Central and South America and Africa. The Chiquimulilla system started early in 2014. Anderson said he sees physical, economic and spiritual transformation in systems like the one in Hernandez’s church.

“That church is now providing safe, affordable drinking water and will be able to do so for many years,” he said. “It is also equipping people to serve their community, not just with the water, but also with the health and hygiene education. And it has a business model that will make it sustainable for a long time.”

Members of Hernandez’s congregation take the water jugs into hard-to-reach locations, and the response has been overwhelming, he said.

“People can tell that this water is good quality and has a good price,” he said. “It gives their families an economic benefit, so they don’t have to choose between buying water and buying food. They see it as a way God loves them when we bring them water.”

Commercial water companies typically charge up to 18 quetzals, or about $2.20 U.S. for a 5-gallon jug. The same jug from Healing Waters is about 5 quetzals.

There is another benefit to providing this water to his community, Hernandez said. Not only is it creating better health in the region, it is transforming his church.

“The youth group started taking water to the hard-to-reach areas, and now there are small youth groups in those areas,” he said. Also, church members created sites for water jugs in their own homes and places of business. A hair salon in one of the neighborhoods has seen business grow significantly once she started selling the clean, affordable water, that people in the area call “Protestant Water.”

“It gives our congregation a way to reach people and build relationships,” Hernandez said. “They’re being evangelists through Healing Waters.”

Hernandez is looking beyond his community, now that the water system is transforming his church and surrounding area. Members of his church are taking the message of clean water into 200 public schools this year, with the blessing of the Ministry of Education and Health. Pastors in El Salvador and Nicaragua have visited his church and have expressed interest in transforming their own churches and communities this way.

“Guatemala has never had an emphasis on drinking safe water,” he said. “We are trying to change the behavior of a country through health and hygiene. We are changing society.”

Now Hernandez sees that water is no longer the problem.

Healing Waters International, based in Denver, partners with churches in vulnerable areas in the world where the available water supply makes people sick.

In addition to providing state-of-the-art technology and equipment that removes contaminants from water, the organization works with community leaders to develop and install the filtration system, and then take ownership of it. Properly maintained, the system will last a minimum of 10 years.

The organization’s inspiration comes from the book of Nehemiah. Their website states: “From beginning to end, the life of Nehemiah is one of integrity, singleness of purpose and intense focus. He devoted his life to the physical, social and spiritual transformation of a city and its people. God has placed on our hearts a similar calling, which we seek to accomplish whole-heartedly and unapologetically in the name of Jesus Christ.”