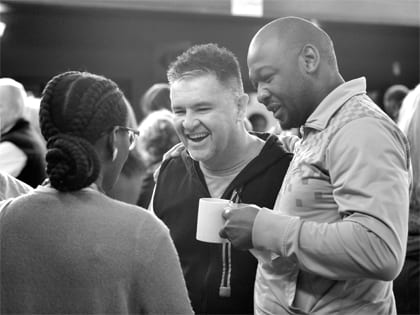 “The pulse of racial healing is part of the church’s emphasis on justice and compassion.”

The two countries may be 9,000 miles apart, but South Africa and the United States have remarkable similarities in their current tensions between blacks and whites. In South Africa, much of the difficulty traces back to apartheid, a political and social system begun in 1948 to maintain white domination of the country through increased racial separation. Apartheid may have legally ended with the formation of a democratic government in 1994, but its legacy remains.

Enter DJ McPhail, a white pastor with a passion to make a difference. “I believe God spoke to me, telling me, ‘We may have a new constitution, but we need new South Africans—and the essence of the gospel changes hearts.’”

McPhail and his wife, Karen, saw many of their friends leave the country, but they decided to stay. As the government began to change, they continued personal efforts of working toward justice and dialoguing about racial issues. “Even under apartheid, I helped people of color buy homes in so-called white areas,” he says.

In 1993, with help from a church they had been part of, the McPhails launched a new church in Johannesburg marked by what DJ calls “a disproportionate passion for the lost.” At the same time, the church emphasized justice and compassion ministry. Even the name they selected—Liberty Church—speaks to the church’s role in faith-based action, echoing Galatians 5:13, which says you’ve been called to liberty, so use it as an opportunity to serve each other with love.

“At Liberty, you are free to be all God has always dreamed you could be,” McPhail emphasizes.

The church’s activist approach led to the founding of Liberty Compassion, a nonprofit organization that runs a soup kitchen, homework room, child sponsorship, food pantry and other outreach programs for impoverished communities, which are often black. It has also opened doors for training other churches to do likewise.

“We help pastors all over Africa, showing how local churches in every town, village and city can take responsibility for orphans and widows,” McPhail comments. “Every town has its justice issue, and numerous Scriptures affirm that the core values of heaven include righteousness and justice.”

Liberty Church includes justice advocacy in what it calls its “Big Five Vision”:

Healing of Black and White

Given South Africa’s history of apartheid, Liberty Church has deliberately worked on racial reconciliation. “If we’re going to pray ‘Thy kingdom come … on Earth as it is in heaven,’ we have to push the boundaries of being multicultural as a church,” says McPhail.

The McPhails have poured themselves into people of color, including those in racially mixed marriages. “We’ve become very intentional in inviting them into a leadership level, so they have the confidence that they’re welcome to lead,” he says.

God seems to be blessing those efforts. McPhail notes the church is very culturally diverse, from its leadership to the congregation. But it isn’t enough for the church to model unity among “persons from every tribe and language and people and nation” (Rev. 5:9). It also must spill into how the church lives during the rest of the week.

“We teach that each person is a missionary on Monday in one of seven gateways of society,” says McPhail. “This is part of our approach to empower people in every sector of society to be an ambassador for Christ.

Stating that most South Africans want to make a difference in their nation, McPhail observes, “We want to get in on the front end of the educational-empowerment piece,” including the church’s involvement in schools through Liberty Compassion, he says. “Our aim is to alleviate the suffering of the most vulnerable in our local communities.”

Another societal gateway is politics. One church member is only 36 years old but has become one of the top influencers on the African continent, leading a major political party. “He’s causing an earthquake politically in our nation,” McPhail notes, adding that this man approaches his leadership role as a Christian. “He communicates dignity even when he criticizes the president.”

The McPhails discipled the man and his wife, who are now being challenged to mentor others. “Now is the time for him to invest in young leaders, especially leaders of color,” DJ says.

The church has already multiplied into five campuses in South Africa, plus one each in Tanzania, the United Kingdom and the United States. The international campuses are designed to help Liberty Church with even more church planting to reach people with the gospel message.

On each campus, the pulse of racial healing is part of the church’s emphasis on justice and compassion. “I always feel we haven’t done enough on racial reconciliation,” McPhail says. “Three of our five campuses in South Africa are made up of a majority of people of color, and soon all our campuses will reflect the real South African demographic picture, but we haven’t yet arrived. All of us are moving toward the best life God has for us, as individuals and as a spiritual family, that will reflect the beauty of diversity in purpose, unity and harmony on this side of eternity.”

Even as the country heals, Liberty Church will continue to be at the forefront of shaping it through the gospel. 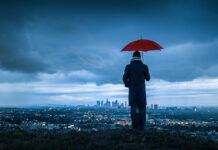 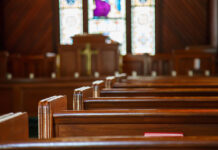 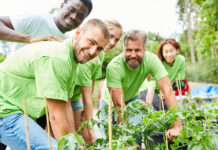