Home Features Approaching an Atheist: How to Initiate Life-Changing Conversations 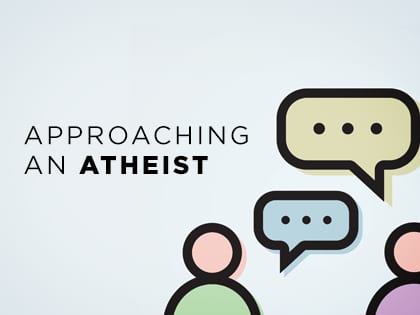 “How do we ‘lead folks away from eternal death and toward the gift of salvation’ without aggravating and alienating them?”

Recently, I was scrolling through my Facebook feed when something caught my eye. A friend named Becca (not her real name), whom I didn’t know well, wrote the following:

“I realize that Christians are supposed to actively recruit people to believe in God, but why can’t these people respect my choice to not believe and just stay out of my life?!?!?!” (Insert five red-faced emojis here.)

She seemed hot, hassled and a wee bit hostile.

I was taken aback. Even if I wanted to take part in the discussion with Becca, where and how would I begin?

Not everyone was as hesitant about the matter, however, as immediately Becca’s friends started weighing in.

Amen? Really? It seemed like an ironic choice of words given the topic of discussion.

I detest confrontation of any sort, on any platform, so my gut begged me to remain mute. Then a woman named Leah piped up.

“I’m a Christian,” she commented. “But I rarely ‘out’ myself as a Christian because guilt by association gets tiring.”

She went on to write, “I don’t care what you believe or don’t believe, as long as you let me do the same.”

“The ‘you stay away from me, I’ll stay away from you, and then we’ll all be okay,’ model is not ideal,” says Pastor Jim Wetzel, chaplain at Franciscan St. Francis Hospital in Indianapolis. “Sure, conflict will be minimized, but at what cost?”

Plus, as Becca alluded to in her post, there seems to be a misconception among atheists that Christians earn some sort of recruitment bonus for luring them over to “the other side.” The truth is, the motivation to intervene has nothing to do with personal gain.

“If you saw someone sinking into quicksand, wouldn’t you throw him a rope?” asks Wetzel. “Atheists can be happy as a lark, even as they descend deeper into trouble, because they’re unable to see the danger that’s enveloping them. Christians who speak up are trying to lead folks away from eternal death and toward the gift of salvation.”

But how do we “lead folks away from eternal death and toward the gift of salvation” without aggravating and alienating them?

Wes Dupin, pastor of Daybreak Church in Hudsonville, Michigan, says he has noticed the increasing presence of what he calls “religion-free communities” where folks don’t seem to appreciate an invite to church or even a Christian conversation. That’s why Dupin thinks that Christians should be proactive in getting involved in their communities—whether that means participating in the neighborhood yard sale, baking something for a school function or serving on a township board.

From Outreach Magazine  Isolation: The Soil for Collapse

“The biggest temples today are not church buildings; they’re giant stadiums,” says Dupin. So, volunteering at the halftime snack shop or on the soccer field may be a good way to make those connections.

Though it can be awkward for Christians to step outside of their comfort zones, Dupin says that moving about in these religion-free communities is key to letting folks know that Christians are not one-dimensional beings.

“You don’t have to wear a T-shirt that says you’re a follower of Christ,” says Dupin. “People will figure that out by your actions.”

Organic outreach is the most effective kind of evangelism, according to Pastor Kevin Harney from Shoreline Community Church in Monterey, California. Harney has written extensively about the subject.

“Organic outreach is when we naturally share the love and message of Jesus with the people in our life,” explains Harney.

The first step, says Dupin, is to practice the “one-degree rule.” This is done by slowly moving the needle toward Christ by just one degree. For example, a member of Dupin’s church board is a realtor. One day he was talking to a man who was looking to put his house on the market. The client confided that the reason he was selling was because his marriage was in shambles. Instead of glazing over that admission, the realtor asked the man if it would be okay if he said a quick prayer for him.

“He just went one degree by offering that prayer,” says Dupin. “Remember, practicing that one degree takes you a few yards at a time—not all the way to the end zone.”

Though social media enables wide opinion sharing, Dupin suggests avoiding the platform to evangelize and instead connect face-to-face. The conversation must begin with trust and respect.

“Listening goes a long way in understanding. Invite them to tell their story because you’ll gain a lot of insight into how their experiences shaped their thinking,” says Dupin. “From there, you can determine how best to enter the conversation in a way that will be well received.”

It’s important that Christians not place the burden on themselves to change people’s hearts or minds. The truth is that we need not—and should not—attempt to do the heavy work of God.

“We can plant the seed, but only God can transform hearts,” says Wetzel.

At Daybreak Church, congregation members do their best to attract the Beccas of the world—to reach those who are unchurched, dechurched and disconnected.

“So many people are disillusioned with Christianity,” says Dupin. “That’s why we’re working hard to get this population of people to give us the opportunity to love them.”

Dupin and his wife were recently eating at a local restaurant in his community when the manager, who Dupin has gotten to know through the years, pulled his chair up to their table to confide that he was struggling with some personal problems.

“My wife and I were getting ready to say grace over our meal, and I asked Josh if he would like to join us for a moment,” recalls Dupin. “Here’s that one degree again. Taking the time to build the trust.” Dupin went on to include Josh in the prayer and when the manager rose from the table, he was fortified.

Many financially well-off people have confessed to Dupin that even with abundant wealth, they feel empty. Fancy cars, vacation homes and other material objects don’t bring solace. And a church building certainly won’t magically produce peace, because faith doesn’t happen in a vacuum.

“People are searching for fulfillment in their lives because they are lonely,” says Dupin, who notes that for two weeks following 9/11, church attendance spiked in Manhattan, then promptly declined again. “You know what I think happened?” asks Dupin. “People went to church looking for answers on why evil invaded America. They were looking for ways to replace the fear in their hearts with peace.”

As with anything in life, there is no quick and easy solution.

“Jesus Christ is the hope of the world. He is the answer. He will give peace,” says Dupin. “But it can take a long to time get someone to trust the messenger.”

I decided to take the advice of Wetzel and Dupin. So, with butterflies in my stomach, I reached out to Becca—not to strong-arm her into accepting Christ, but to simply show her grace.

“Want to go out for coffee?” I asked.

The conversation had begun.

What to Say and When

Dupin suggests that the best way to approach a nonbeliever is simply by saying, “When you’re ready, I’d love to have a conversation with you. Perhaps you can tell me your story.”

You’ll likely hear about some hurt, disillusionment and pain from the past. But don’t run from the conversation when it gets awkward.

“Listen to them. Allow them to say whatever they want to say,” advises Dupin. “Then offer, ‘Would it be okay if I share my story of how Christ came into my life?’”

Doors will open. Hearts will heal. Lives will change.

Christy Heitger-Ewing is an award-winning freelance writer and columnist who writes for national, regional and local magazines. She is also the author of the book Cabin Glory: Amusing Tales of Time Spent at the Family Retreat.