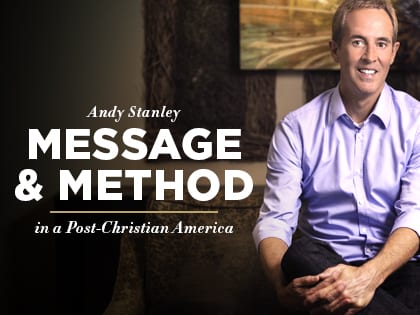 By Andy Stanley
with Thomas Horrocks
This discussion of Andy Stanley’s message and method originally appeared in Nov. 9, 2016. It is reposted here because of its relevance to ongoing discussions about faith, revelation, context and proclamation.

First, the elephant in the room. I believe the Bible is without error in everything it affirms. I believe what the Bible says is true, is true. Neither of those statements is original. I learned the first one from Dr. Norman L. Geisler and the second one from the late Dr. Charles C. Ryrie. I was fortunate enough to study under both of these distinguished scholars. But long before I made the acquaintance of either, I was already convinced of the infallibility of the Scriptures. I was convinced for the same reason the late Dr. E.V. Hill was convinced. During our commencement address, he held up his big, black, well-worn, leather preaching Bible and declared loud and proud, “I believe the Bible is the inerrant, infallible, unchanging Word of God. And the reason I believe … is my momma told me!”

My momma told me too.

So did my daddy.

In fact, while studying for my Th.M., my daddy, Dr. Charles F. Stanley, was embroiled in a battle for the soul of the Southern Baptist Convention (SBC). At stake was the Bible. He and a handful of other influential SBC conservatives worked tirelessly to rescue the convention from an academic stream that threatened to undermine the convention’s long-standing commitment to the infallibility of the Bible. In the end, they were successful. All that to say, the integrity of the Bible is neither a purely academic nor an emotionally neutral topic for me.

While Charles Ryrie will always be remembered for his groundbreaking study Bible, Norman Geisler will be remembered for his participation in the development of The Chicago Statement on Biblical Inerrancy. The statement was produced in 1978 at an international summit of evangelical leaders. It was signed by nearly 300 scholars, including James Boice, John Gerstner, Carl F. H. Henry, Harold Lindsell, John Warwick Montgomery, J.I. Packer, Earl Radmacher, Francis Schaeffer, R.C. Sproul and, of course, Dr. Geisler. Following the conference, Dr. Geisler was asked to edit for publication the 14 papers presented at the conference. Topics included Christ’s view of Scripture, alleged errors and discrepancies, the human authorship of inspired Scripture, philosophical presuppositions of biblical errancy and more. Two years later, the collection was published under the title Inerrancy.

That was my textbook.

Dr. Geisler was my professor.

He called a couple of weeks ago to check on me. He’s 84. I haven’t talked to him in years. “Andy,” he said, “folks are giving you a hard time. I understand what you were saying.” He was referencing a message titled “The Bible Told Me So” that caused more than a few to question my view of Scripture and my understanding of how the canon came to be. The message was part of a six-part series titled Who Needs God. The target audience was the increasing number of millennials who grew up in church but outgrew their faith.

From Outreach Magazine  7 Ways to Fix a Toxic Church Culture

More on that later.

“Andy,” he said, “I understand what you are saying but not everybody does. You need to put something in print so they know you hold to inerrancy.” I assured him I would. But I also assured him the they he referred to wouldn’t change their opinion because I’ve been in this long enough to know my take on inerrancy is not really the issue. He laughed. “I know, but you need to put it in print anyway.”

So here we are.

I love that man. In seminary we called him Stormin’ Norman. I remember walking out of class after his final Apologetics 101 lecture, staring up into a clear Texas sky and whispering a short prayer: “I’ve always believed … but now I know.” He began the semester with the premise, “Something exists.” From there he built an argument for the existence of God, miracles, the historical reliability of the New Testament documents, the resurrection and finally the infallibility of the Old Testament based on Jesus’ statements regarding the Hebrew Scriptures. It was life changing. I’ve been drawing from that well for over 30 years. So when I read about and hear about my incoherent view of Scripture, my liberal leanings, how embarrassed my father must be, I smile and think, You have no idea. So for anyone out there who is still a bit suspicious, I affirm The Chicago Statement on Biblical Inerrancy. Heck, I studied under the man who co-authored the whole thing.

The confusion related to my most recent series stems more from methodology than theology. Two things in particular. First, I preach without notes. In my quest for an engaging presentation, I sometimes sacrifice precision. Sometimes I’m more precise at the 11:00 a.m. service than at the 9:00 a.m. By the time the 4:30 p.m. service rolls around, I usually have my act together. Usually. A second technique that is sometimes confusing for the occasional viewer is my habit of saying what I suspect skeptics are thinking about something I’m saying. In my effort to state their assumptions, I sometimes sound as if I share their assumptions. Similarly, I look for opportunities to affirm an unbeliever’s assumptions. I say things like, “I don’t blame you a bit for thinking that way.” For listeners accustomed to preachers taking every opportunity to correct, chastise and reprimand unbelievers, my approach is confusing. But for the father whose 23-year-old son agreed to give church one more chance … well … folks like that hug my neck and send me gift cards.

During “The Bible Told Me So,” I wanted educated, dechurched millennials to know that I knew that those who supposedly know everything are convinced there was no worldwide flood or Hebrew migration from Egypt. While addressing them directly, I gave them the benefit of the doubt to make the following point: Even if those events never occurred, it does nothing to undermine the evidence supporting the resurrection of Jesus and thus the claims he made about himself. And yes, as noted above, I know Jesus made claims about the Jewish Scriptures. But this was one sermon in a series of six … I hadn’t gotten to that yet.

From Outreach Magazine  Ron Hutchcraft: Rescuing the Person Outside the Walls

As I explain in Deep and Wide and Communicating for a Change, I approach a message series like a single, two- or three-hour message divided into four or five parts. I’m comfortable with tension, unanswered questions and leaving people hanging. Not everybody is.

But to recap, yes, I believe the Bible is without error in everything it affirms. Yes, my approach to preaching is not traditional. Yes, my approach at times leaves those outside our local congregations wondering if I’m still an evangelical. So in light of all that, along with the fact that here I am once again having to explain myself, shouldn’t I consider changing my approach?

Actually, I would like you to consider changing yours.

The world has changed.

The approach most of us inherited doesn’t work anymore. Actually, it’s never worked all that well. In a culture that had high regard for the Bible, the traditional approach held its own. Those days are over. They’ve been over for a long time. If you think I’m using culture as an excuse to maintain a flawed hermeneutical approach, consider this.

In 2015, I took seven staff members to Nashville to attend the Ethics & Religious Liberty Commission conference on “Homosexuality and the Future of Marriage.” In the opening session, Dr. Al Mohler, president of the Southern Baptist Theological Seminary, made a comment that took my breath away. Nobody else in the room seemed the least bit bothered. I wrote it down and then went back and listened to the session again online to make sure I heard correctly. Speaking specifically about Southern Baptist churches, he stated:

“The vast majority of people who’ve ever been baptized by our people are our own offspring. We’ve never been very evangelistic in terms of people who weren’t those to whom we gave birth.”

Seriously? The SBC has never been evangelistic beyond people to whom they gave birth? If that’s the case, and he should know, it seems to me my friends in the SBC, along with church networks everywhere that embrace a similar approach, need to hit pause and rethink things. Perhaps everything. Not their view of Scripture. But perhaps their approach to talking about Scripture. More specifically, their approach to talking about Scripture in a culture that doesn’t take the Bible seriously anymore.

Eight years ago I shifted my approach. I didn’t announce it. I just did it. The results have been remarkable. You may not like my approach. That’s fine. I just hope you don’t stick with an approach you inherited because it’s comfortable. As I tell leaders all the time, “Marry your mission; date your model.” Your preaching and teaching model is just that—a model.

It may be time to break up.