Home Resources Voices What Are You Going to Do With Your Life? 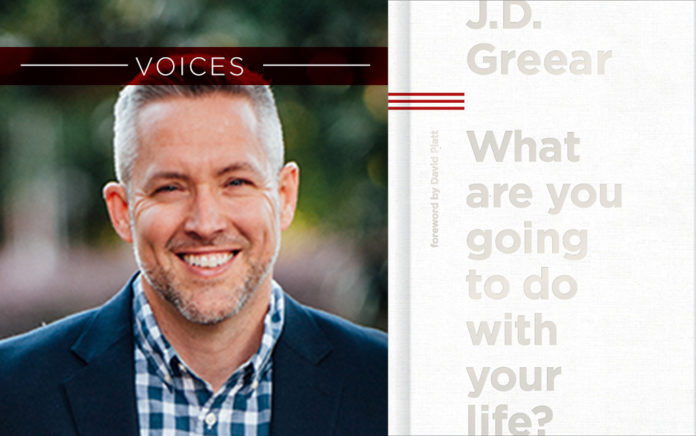 A conversation with J.D. Greear

A Conversation With J.D. Greear, Author of What Are You Going to Do With Your Life?

Why do you advise to “kick your bucket list”?

Bucket lists are inappropriate for Christians not because good Christians stay at home, be boring and play it safe. It’s just that we know that life on earth is not our only chance (or even our best chance) to experience what the world has to offer.

Scripture gives every indication that the “new heavens and new earth” (Rev. 21:1, 4) will contain better versions of anything in God’s good creation that we enjoyed down here.

Many people wrongly think of heaven as some ethereal life of leisure where saints sit around in diapers on colorless clouds with NERF bows-and-arrows, strumming their harps and sipping non-alcoholic piña coladas. We gather at least twice daily for choir practice, but that’s our only real activity.

The Bible describes heaven much differently. Though it leaves a lot unsaid, what it does say indicates that heaven is a reality that is more than, not less than, anything we experience on earth.

Scholars say “new heavens and new earth” is better read “renewed heavens and earth.” In other words, the new earth is not a replacement of the old, but a renewed and restored version of it, freed from the curse of sin, supercharged with the glory of God.

All the mountains, rivers, oceans, animals, culture, arts, music, architecture, solar systems and even extreme sports that I never got to experience here are waiting for me there, in glorified form.

Furthermore, the Apostle John goes on to say that God will “… bring into heaven the glory and honor of the nations” (Rev 21:26). That means the best of culture—the best of Italian food, the best of Arabian and Colonial architecture, the best art, Mardi Gras (without the debauchery), Disneyworld (without the lines), the Jersey Shore (without, you know, the Jersey).

(By the way—I can’t prove this, but I’m pretty sure that in heaven all the foods that are bad for you here are good for you there, and vice versa. There, ice cream and chocolate are good for the waistline, while cauliflower makes you gain weight. Like I said, I can’t prove that, but these things are spiritually discerned. Let the wise reader understand.)

I’ve always wanted to climb Mt. Everest. My wife tells me it’s off the table until my kids at least graduate college. And by that time, I may not be physically able, and so I may never get the chance. But that’s okay, because in heaven, I’m confident I’ll get to climb the renewed one, which will be a lot better anyway. And when I get to the top, I’ll fly over to the heavenly Tuscany for dinner.

Talk about the “myth of calling.” What do you mean by that?

One of the most destructive myths alive in the church today, I believe, is that only a few are called to the ministry.

Many Christians believe that “calling” is a sacred experience reserved for a select few conferred through a mystical manifestation. They assume that if God wants something significant from their lives, he’ll communicate it through some kind of burning bush, wet-fleece/dry-fleece dramatic sign. I call this the “Cheerios” method of discerning the will of God. If God has something significant for you, he’ll spell it out in your Cheerios. The little o’s will mysteriously form, “go to Nepal” or “be a pastor” or whatever.

But here’s the truth: All Christians are called to ministry. Not necessarily to vocational ministry, but to leverage their lives for the Great Commission.

That call, you see, was included in the initial call to follow Jesus. “Follow me,” Jesus said, “and I will make you fish for people” (Matthew 4:19). That means when you accepted Jesus, you accepted the call to mission.

Another way to say it: The question is no longer if you are called, only where and how.

In 1904, William Borden graduated from high school. He was the heir to the Borden family fortune. At the time, the Borden Milk Company was one of the most profitable businesses in the United States, which would have made young William one of the richest men in the country. Upon graduation, his parents gave him a luxurious graduation gift—a trip across the globe.

From Outreach Magazine  William Borden: A Life Without Regret

Something happened on that trip, however, that his parents were not anticipating. Borden became overwhelmed by the world’s lostness. He couldn’t get over the masses of people with no chance of hearing the gospel. Borden was a new believer, and he wanted to do something about it.

William told his father that he didn’t want to take on the family business. He wanted to be a missionary. His parents were furious, but William told them that he would divert any inheritance he received into the mission. Some of William’s Christian friends even told him, “You’re throwing everything away. You’re wasting your life!”

But Borden wouldn’t be dissuaded. After graduating from the University of Yale and then Princeton Seminary, he climbed aboard a boat headed for China.

Because Borden intended to work with Muslims in China, he stopped in Egypt to spend time learning Arabic. One month after arriving, however, he contracted spinal meningitis and died. He was 25 years old.

Back in the United States headlines proclaimed the tragic news. The stories echoed the advice Borden’s friends and family had given him: What a waste of a life!

But Borden didn’t think so. As the story goes, while on his deathbed, someone asked if he had any final words. He pulled out his Bible, turned to a blank page at the back, and wrote, “No regrets.”

William Borden is buried in a small cemetery in Cairo. The cemetery is so out of the way that if you don’t know what you are looking for, you’ll never find it. His tombstone is bunched up among many others, and the writing on it so faint you can barely read it. But if you get down real close you can make out a single sentence: “Apart from faith in Christ, there is no explanation for such a life.”

Apart from faith in Christ, there is no explanation for such a life.