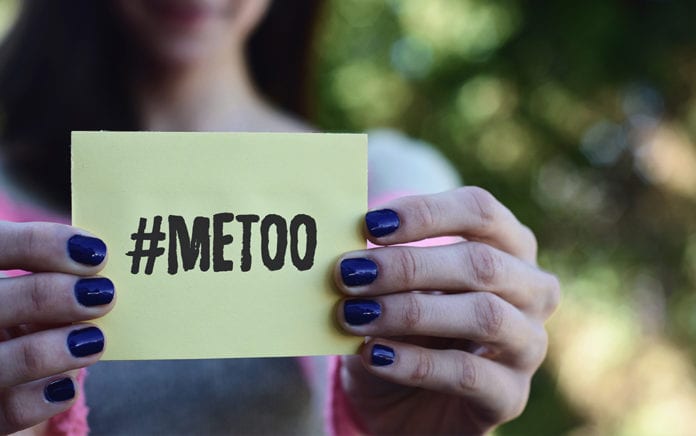 Next month, join Beth Moore, Max Lucado, Eugene Cho and others as we begin to address #MeToo and #ChurchToo in our congregations.

Churches have struggled with how to address sexual abuse, harassment and more.

Many leaders, attendees, and pastors alike find themselves living in the aftermath of not just what happened a year ago, but what’s actually been happening for decades. Trust has been broken, power has been abused, and most importantly, people have been hurt.

Many have been deeply wounded by the hands of others—more than we’d ever want to count.

For those of you who haven’t caught on yet, I’m talking about #churchtoo—an extension of the #metoo movement that took the media by storm a year ago. In #churchtoo, churchgoers shared their own experiences of abuse and harassment—and for many in the church, these things have been at best uncomfortable to hear; at worst, detrimental to the local community of believers.

You see, many of us would like to believe that the abuse of women (and men) is a purely secular phenomenon that happens in the outside world—a realm far beyond the comfortable pews and pulpits we call home.

But this is simply not the case. Sexual violence and harassment take place in churches, ministries, and more. It is past time all church leaders deal with it as we are called to.

If the stats are right and roughly 1 in 4 women have been sexually abused at some point, then this reality is everywhere, likely even in your local church.

In #churchtoo and elsewhere, it has been overwhelming to say the least to see so many women come forward and share things like, “I was raped,” “I was groomed by my high school youth pastor,” “The pastor didn’t believe my story,” and “My church held no one accountable.” I even have several staff members with a similar story. And it pains me deeply.

The media watched as stories of heartbreak and hurt like these became an internet sensation. But they also watched as several months later, the new year rang in, and with it stories of pastors whose behaviors were finally being exposed. But not just any pastors—these were pastors of mega churches with thousands of attendees and seminary leaders whose individual reaches spanned the globe.

At the end of the day, these stories of sexual abuse and mistreatment in the church are many and the damage is real. It’s hard to know where to begin to start picking up the pieces from this kind of darkness and confusion; it’s tempting to want to forget that any of this exposure happened in the first place.

But hear this, church: turning a blind eye is simply not an option.

People have been hesitant to speak out about the #churchtoo movement. There’s been a lot of silence coming from some of the pastors and leaders whom we most admire.

According to a recent study released by LifeWay Research, some congregations are confused about how to react—32 percent say that they find themselves still largely unaware of the implications of the #metoo movement. Even more unfortunate, we see that 14 percent have even become callous towards the issue.

While avoidance and inaction have characterized the responses of many, something’s got to change and soon.

The world is watching, people are being hurt, and the church’s witness is at stake not just today, but for future generations.

What we ultimately need is not just an apology for the wrong that’s been done, but tangible change. And this is not just changes in behavior and vows to ‘never do it again’, but systemic changes in churches, and protective practices that are put in place to ensure accountability.

But even more than that, we need changed hearts. We need to stop viewing people—in many cases, women—as objects intended for exploitation. Indeed, when we open our Bibles, we see quite the opposite.

In fact, we see a God who made all of us in his image, and who loves us all equally.

Dismantling abusive patterns requires all of us to take action. The church should never have been a place where the issues addressed in the #metoo movement were alive and well. Instead, the church should be (and should have always been) a place where we see the people of God living in rebellion against the cultural sins of our day.

That’s why, on December 13, the Billy Graham Center is hosting the GC2 Summit on #metoo/#churchtoo at Wheaton College. We will explore ways that the church can address internal issues, repent of wrongdoing, and provide solutions so that the abuse and mishandling that paved the way for #churchtoo is no longer a reality.

I invite you to join me and many others at this very important event. Let me share just a few thoughts about some of the reasons we are in the situation we are in—and these all have to do with the role of pastors and leaders today.

From Outreach Magazine  Quentin Schultze: Communicating With Grace and Virtue

We Need to Address Pastors

Pastors need accountability. That’s not a shocking statement. But the fact that so many are unaccountable is shocking.

When church leadership goes unchecked, the door to abuse is wide open. If our pastors can effectively do no wrong, and we have created an idol out of sinful flesh, then we can expect nothing but injustice to occur, for we are all prone to sin.

We will talk about ways to hold one another accountable that is redemptive and appropriate, which is ultimately good for everyone involved.

We Need to Deal with Brokenness

It’s easy to think that our Christian leaders are beyond reproach; I mean, they are “holy” by virtue of their faith, right?

Newsflash: Everyone is fallen and sinful. The Psalmist wrote it thousands of years ago and, surprise, surprise, it’s still true today: “There is none who does good. Not even one” (Ps. 14:1–3).

Seeing one another, pastors and all others, as perfect but living in a broken world isn’t helpful for you, nor is it helpful for them. Moreover, it opens the door for the exploitation of innocent people in a church community.

Most of All We Need to Care about Survivors

The real issue is that people are being hurt. They are being victimized. And, churches don’t know how to respond or respond poorly.

We believe there are better ways. There are ways that protect people and honor God.

And this is why we are having this GC2 Summit on #metoo/#churchtoo.

When Jesus bends his ear to hear, he turns none away. He is calling us to do the same—to respond to survivors in such a way that transformation, healing, and redemption will mark lives forever. We can do no less.

The truth has come to light and the church can either own up to its mistakes, or risk losing our witness in the world—and more.

I hope and pray that we choose the former.

So join Beth Moore, Christine Caine, Eugene Cho, Belinda Bauman, Max Lucado, Nancy Beach, York Moore, Laurel Bunker, me and many others on December 13 as we continue the conversation that leads to honesty, addresses persistent issues and looks for healing and grace.

Gabriella Siefert contributed to this article, which originally appeared on The Exchange.