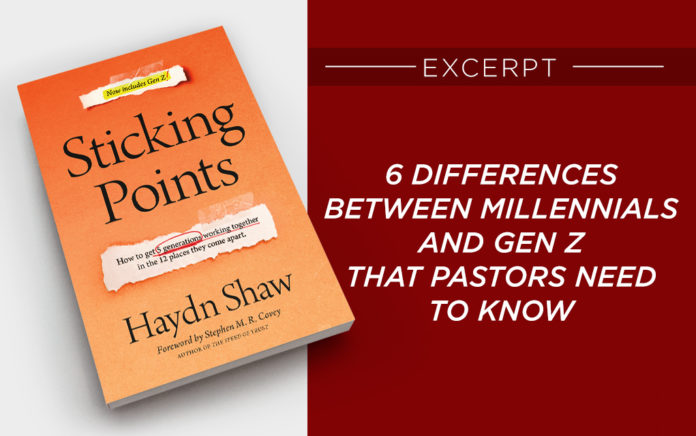 What church leaders need to understand

Gen Z is the first generation to be born digital. We have all witnessed 18-month-olds become frustrated because nothing happens when they swipe a television screen. When I was bored growing up, my parents told me to play outside. When Gen Zs were bored, their parents handed them their phones. And many grandparents have been surprised with unexpected purchases when young children are able to buy something because they can work the phone better than the grandparents can.

Generation Z was born online. Even though Facebook did not officially allow it, a 2014 study revealed that 40% of newborns had a social-media profile that their parents had set up for them. And while families today are more cautious about privacy, this was not the case at the start of Generation Z. One analysis showed that in Britain the average child had one thousand photos of them posted online before they were 5 years old.

The youngest millennials were 9 when Apple introduced the first smartphone. Gen Z was practically born into it. So while millennials and Gen Z are both quite comfortable with technology, social media and being connected, there are some important differences between the two generations.

You may have heard the phrase “mobile friendly,” but Gen Z wants mobile first, not mobile friendly. For other generations, you could design your website for a laptop and then try to make it work for mobile, but for Generation Z, you design for mobile first, and if it works on a computer, that’s a bonus. Gen Zs use their computers less than their mobile phones or tablets. They are twice as likely to buy on mobile. Gen Zs are impatient with loading speeds—okay, we’re all impatient with loading speeds—but they are more impatient than any other generation and will simply leave if it takes too long for something to load or if the interface is too complicated. The amount of time they spend at it and the speed at which they scroll amazes researchers. Companies can’t just measure time on the site; they have to also factor in scroll speed. It’s no surprise that attention spans have dropped from 12 seconds with millennials to 8 seconds with Gen Z.

2. But Not Mobile Phone

Gen Z knows it’s a mobile phone, but they mainly use the data. As a result, many parents as well as employers are worried that Generation Z will struggle on the phone when they get into the workplace. When I mentioned this in one presentation, a woman pulled me aside and said, “That is so true. My daughter has a full scholarship to college. When the coach asked her to get in contact with him to accept the scholarship, she e-mailed him and didn’t hear back. After three days, I finally said to her, ‘Pick up the phone and call him.’ I had to stand there with her until she finally called the coach and told him she accepted the scholarship. Her explanation for her reluctance was ‘I don’t know him well enough to call him.’” Telephone calls are reserved for the closest relationships, and even then, they are used sparingly.

3. Social Media, Not the Internet

Generation Z finds product information and news on social media rather than the Internet. Many have moved on from text messaging to messaging apps. Social media is where they communicate, curate their identity, and develop their consumer habits. Yet for all their time spent online and online shopping, Gen Zs still like physical stores. Gen Zs are in the mall an average of two times a month, and not just to get their exercise. But the physical store is often a hook for social media, and Gen Zs have been known to return items they’ve bought from the mall if they don’t score enough likes among their followers on social media.

The rise of YouTube has led to the rise of the YouTube celebrity. Whereas Boomers and Xers paid attention to sports and entertainment celebrities recommending products, YouTube has created a new brand of influencers who enjoy no celebrity status outside of the platform. Generation X bought Air Jordans because they knew Michael Jordan and wanted his moves; Generation Z might buy Air Jordans because they’re retro but not because they care about the basketball star. YouTube gamers have some of the most popular channels. A recent study found that young gamers “spend an average of 3 hours and 25 minutes each week watching other people play video games online.”

YouTube encourages the visual, as do emojis, in place of text. Even the social-media platforms Gen Zs prefer are more visual. They still text friends, but they curate their lives visually with Snapchat and Instagram rather than Facebook. They and the younger millennials made memes popular, and even older generations are sending gifs because phones now build them into the keyboards. Especially in marketing, if you rely on words to tell your story instead of pictures, only Xers will pay attention to you. (Xers do more reading than any other generation before they purchase.)

While both millennials and Gen Z grew up digital, millennials grew up with the promise of social media and the smartphone. Gen Z grew up with the downsides. The wonder of unlimited information and the constant connection of social media have been replaced by fake news, online bullying, and heightened depression. Gen Zs have seen the real-world fallout of online missteps, and their parents have hounded them that they need to be careful with what they post. They have a greater understanding that what happens on social media stays on social media forever and can cause real-world problems, not only if they want to run for president but also if they need to find a job. That’s why 95% of teenagers say they are careful with what they post. So Gen Zs often use different platforms for different purposes. Instagram is where they frequently curate their identity, where they will post pictures of themselves at their best and then replace them so that people see their “true selves”—how they want to be seen. Many Gen Zs have multiple Instagram accounts for different audiences with different levels of privacy. They use Snapchat to send quick pictures of their daily life, even when they’re not at their best, but Snapchat is usually for a smaller, more controlled group of friends. And they use phone calls for their very closest friends and text messaging for large-group chats.

From Outreach Magazine  How God’s Word Changed My Life

Gen Zs’ technology is more than just a tool; it’s an expression of their identity. Even more, it’s one of the ways they construct their identity, trying on and testing others’ reactions to the identities they explore.

Excerpted from Sticking Points: How to Get 5 Generations Working Together in the 12 Places They Come Apart by Haydn Shaw. Tyndale House Publishers. Copyright 2020 Haydn Shaw. Used by permission.