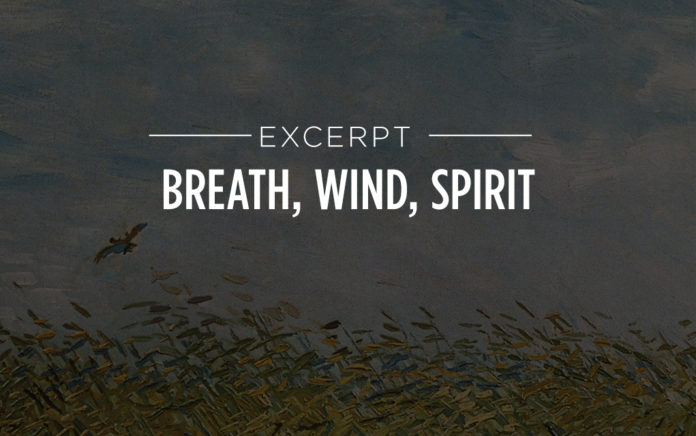 Examining the untamed Spirit of the Old Testament.

Excerpted From
A Boundless God
By Jack Levison

It is impossible to capture in English translation the drama of the original Hebrew, where all three English words—breath, wind and spirit—are one: rûaḥ. Ezekiel repeats this word in order to emphasize that the one and only rûaḥ of God inspires the resurrection of Israel—a resurrection that is at once a creation like Adam’s (rûaḥ as breath), a rush of vitality (rûaḥ as winds) and a promise of fidelity in their homeland (rûaḥ as life-giving spirit). The beating of the drum of rûaḥ is simultaneously personal, cosmic and national; to subdivide this word, as translators are compelled to do, is to lose the power of ambiguity, by which Ezekiel piles up the connotations of rûaḥ to pound resurrection into Israel’s deadened psyche.

The intimate connection between God’s breath and wind, then, came to a resplendent climax in the experience of Ezekiel, during the ominous decade following the deportation of Judah’s leaders in 597 BCE, followed by the wholesale destruction of Jerusalem in 587 BCE. When hope was at its lowest ebb and Israel chanted the threnody, “Our bones are dried up, and our hope is lost; we are cut off completely” (Ezek. 37:11), Ezekiel imagined the highest intensification in Israelite literature of rûaḥ as breath, wind and the source of national restoration. Not affluence and ease but communal crisis yielded literature of unsurpassed hope in the power and potential of God’s rûaḥ to breathe new life into a defeated and dislocated community.

The strange notion of rûaḥ in the Hebrew Scriptures shatters taxonomies, leaving us to ask mistakenly, “Is rûaḥ wind? Breath? Spirit? Or spirit?” In particular, rûaḥ causes tidy dichotomies to splinter, neat categories to fragment. In Israelite antiquity, a wind from the sea carrying quail might be every bit as much—or more—divine as the power that prompts elders to prophesy.

From Outreach Magazine  Your Church Can't Please Everyone—3 Better Alternatives

Rûaḥ rolling over the tongue of a disconsolate man on an ash heap may evoke as much—or more—wisdom than a surprise onslaught of spirit. In short, familiar distinctions between divine and human, comfortable boundaries between sacred and profane, accustomed borders between spiritual and material, evaporate in the presence of rûaḥ.

The distinction between the personal and political also vanishes.

The Hebrew Scriptures do not allow the Spirit to be sequestered within the secure confines of the individual or the relatively safe space of the church. When it comes to rûaḥ, private yields to public. The profane, rather than the sacred, is the sphere of the Spirit’s influence.

This is apparent right at the start, when the rûaḥ of God hovers over the cosmic abyss (Gen. 1:1–2); when, in the flood, drowning humans and animals alike possess the breath of the spirit of life (6:17; 7:15, 22); when, in the story of Joseph, an Egyptian pharaoh—a foreign ruler whose empire was unparalleled at the time—recognizes the rûaḥ of God in Joseph (41:38). The book of Genesis, which contains our first clues to the world of the spirit, positions the rûaḥ above the abyss, in the throats of both human and animal, and in Joseph, whose wisdom is recognized by an alien ruler. There is nothing in the book of Genesis to suggest that the Spirit is only spiritual, that its sphere of influence lies exclusively within the individual, or that discernment of matters related to the Spirit is ecclesial, belonging solely to a community of faith or a church of some sort. Not a pious but a profane, pagan ruler has the wherewithal to acknowledge the rûaḥ in Joseph.

The Spirit, in short, was not yet tame in the annals of Israelite literature. Absent the creeds, long before Christians annexed philosophy to grasp the nature of the Spirit, Israel told stories of a mysterious presence that prompted remarkable feats in the public sphere. The comfortable constraints of later generations were not yet in place; this is untamed wilderness. Not gardens but forests. Not fields but plains.

Excerpted from A Boundless God by Jack Levison ©2020. Used by permission of Baker Publishing BakerPublishingGroup.com.