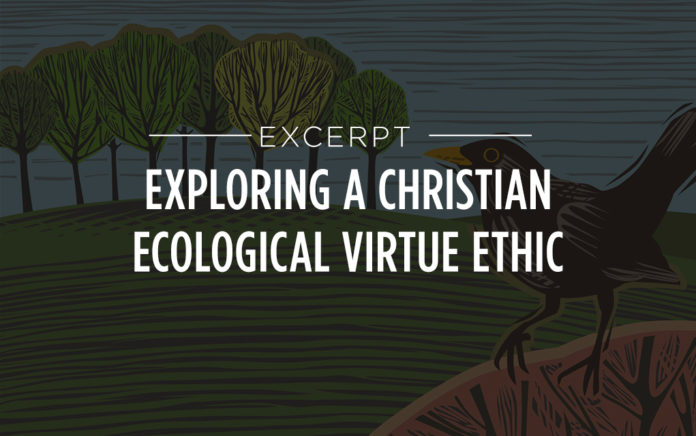 The intersection of virtue ethics and environmental ethics

Excerpted From
Earthkeeping and Character
By Steven Bouma-Prediger

This recovery of the virtue ethics tradition should come as no surprise. In our more reflective moments, most of us wonder about the kind of person we have become and the kind of person we aspire to be. Perhaps celebrating a new birth or lamenting the loss of an old friend, contemplating a job change or witnessing a wedding, reading an obituary or attending a funeral, we ask: Who am I, really? What personal character traits am I proud of? Courage and compassion, humility and honesty, generosity and graciousness? And which traits do I wish would magically disappear? Impatience and insensitivity, stinginess and self-deprecation, avarice and apathy? Character traits lie at the heart of who we are. They mark us—for good and ill, to our credit and to our shame—as the unique people we are.

So an ethics of character is not new or foreign to our lives. Parents strive to nurture in their children commonly sought virtues such as courage and compassion, honesty and hope. Teachers endeavor to form students in certain ways, for example, by discouraging plagiarism and promoting academic integrity, even if the teachers think (falsely) that they are not in the business of moral formation. Business owners set policies designed to cultivate certain virtues—for example, honesty, diligence and inventiveness—and thus promote particular practices and behavior in the workplace. In short, character formation is taking place all the time, for better or for worse.

What is new is that in recent years more scholars have given virtue ethics their attention, and scholarly discussions have shifted to recapture the virtue ethics tradition.

So what I propose in this volume is a reframing of ecological ethics. I develop an ecological ethic centered on the virtues by drawing on the rich resources of the Christian faith tradition. In so doing I join a growing chorus of scholars (philosophers, theologians and ethicists) who advocate virtue ethics, including many Christian scholars. I also join an increasing number of scholars (again mostly philosophers, theologians and ethicists) who espouse some form of environmental ethics. There are, however, not many scholars who focus on the intersection of virtue ethics and environmental ethics—namely, environmental virtue ethics. That is, there are relatively few who emphasize character traits (both virtues and vices) with respect to environmental issues. And within the field of environmental virtue ethics, there are, as yet, few whose work draws explicitly on the Christian tradition. With this book I offer my contribution to our understanding of ecological virtue ethics. Beyond mere understanding, important as that is, I hope this volume will, to use the words of David Orr in the second epigraph to this chapter, help nurture “the qualities of virtue” that will enable us to “do the difficult things that will be necessary to live within the boundaries of the earth.”

Why the title Earthkeeping and Character? And what exactly is meant by the subtitle Exploring a Christian Ecological Virtue Ethic? Of the many words and phrases used to express our care for our home planet, in my view the word earthkeeping best captures our human vocation to serve and protect the earth.

Coined by Loren Wilkinson and his coauthors in their groundbreaking book, the term earthkeeping, with its reference to the earth, is concrete, unlike the more abstract term world. Also, earthkeeping focuses on where we actually live, this blue-green orb called Earth, unlike the hopelessly expansive term creation. This focus on the Earth, furthermore, includes the entire biosphere and all the interlocking systems and creatures that are an integral part of this thin slice of life-filled existence, thereby emphasizing both human and other-than-human creatures, unlike the term nature, which tends to assume a split between human and nonhuman. Finally, the compound word earthkeeping accurately names our biblical calling as humans to preserve and protect (as well as use) the earth (Gen. 2:15). In short, earthkeeping captures our calling to care responsibly for our home planet. The third word in the title, character, points to the tradition of ethics most concerned with virtues and vices and the crucial role they play in our attempts to care for the earth.

The subtitle, among other things, names the academic territory: ecological virtue ethics. While the commonly accepted term for the field is environmental virtue ethics

I favor the term ecological virtue ethics. So when referring to the larger world of scholarship in ethics, I use the more common term, even though I think the term environmental is a poor choice of adjective. Words matter. As an ancient Chinese proverb puts it, “Whoever defines the terms wins the argument.” There will be more later (in chap. 1) on why ecological virtue ethics is my preferred term.

The subtitle also states my perspective as a Christian scholar on this academic field of study. Unlike some who argue that religion should be eradicated or at least kept private, I argue that the Christian tradition has much to offer contemporary ecological ethics, as do other religions each in their own way.

The Bible has more to say on earthkeeping than many people (including many Christians) realize, and the Christian tradition is deep and rich when it comes to virtue ethics. My treatment of this topic, however, is a series of explorations, much like being a backpacker in the Sierra Nevada or a canoeist in Quetico. What follows are excursions from a journey, like a series of day trips designed to reconnoiter new terrain.

What does this bookish exploration look like? In chapter 1, I map the territory. In other words, I lay out the big-picture landscape of ethics in our time, provide an anatomy of virtue and the virtues, outline the development of ecological virtue ethics, and articulate my own approach to ecological virtue ethics. A kind of primer in Christian ecological ethics, this chapter lays the groundwork for all that is to follow.

In chapter 2 we explore what it means to live with amazement and modesty. In a culture that all too often sucks the amazement right out of us as we proceed up the educational ladder, how do we recover our ability to recognize and appreciate the marvels of life on earth? In a culture that seems to assume that humans are divine, what does it mean to acknowledge honestly that we are not gods or demigods? If we took our creatureliness seriously, what virtues would we deem necessary? Wonder and humility are two such virtues. These habitual dispositions are at the very core of what it means to acknowledge that we are creatures of God—humble humans from the humus (to paraphrase Gen. 2) standing amazed by the world of wonders in which we find ourselves.

In chapter 3 we explore what it means to live with strength of mind and discernment. In a culture where bumper stickers proclaim, “Whoever dies with the most toys wins” and “You are what you drive,” what would it look like to live with fewer things because we are able to restrain and retrain our desires with a spirit of gratitude for what we already have? And in a culture that often mistakes data for knowledge, thinks education means regurgitating information, and confuses intelligence and insight, what does it mean to live wisely and well? Self-control and wisdom name the countercultural virtues needed here. These character traits enable us to discipline our disordered desires and discern what is genuinely good and true.

In chapter 4 we explore what it means to live with respect and care. In a culture in which lives, both human and nonhuman, seem increasingly cheap and disposable, where disrespect for all that is other than ourselves seems more and more prevalent, what does it mean to live as people animated by justice? In a culture that promotes cynical indifference, where apathy all too often accompanies our foggy awareness of the latest plunderings of our home planet, what would it mean to cultivate care for human and nonhuman alike?

Justice and love name the virtues we need in this (or any) culture. Respect for rights and care for needs succinctly describe these habitual dispositions. These two virtues lie at the core of every discussion of ethics.

In chapter 5 we explore what it means to live with fortitude and expectation. In a culture of growing apprehension and seemingly endless anxiety, what would it look like to face our fears and act with a resolute spirit, without either acting recklessly or being paralyzed by fear? In a culture rife with false hopes, with prophets (and profits) of easy credibility lurking everywhere, what does it mean to resist both despair and presumptuousness and, in contrast, embrace with confidence the expectation of God’s good future of shalom?

In these circumstances, courage and hope are the virtues needed to enable us to live through our fear and overcome the temptation to despair.

As Aristotle, among others, reminds us, the aim of studying the virtues is not theoretical but practical. That is to say, our goal is not only to learn about the virtues but also to become more virtuous. May that goal be realized in your reading of this book.

Excerpted from Earthkeeping and Character by Steven Bouma-Prediger, ©2019. Used by permission of Baker Publishing. BakerPublishingGroup.com