Home Resources Books What Is the Flourishing Life? 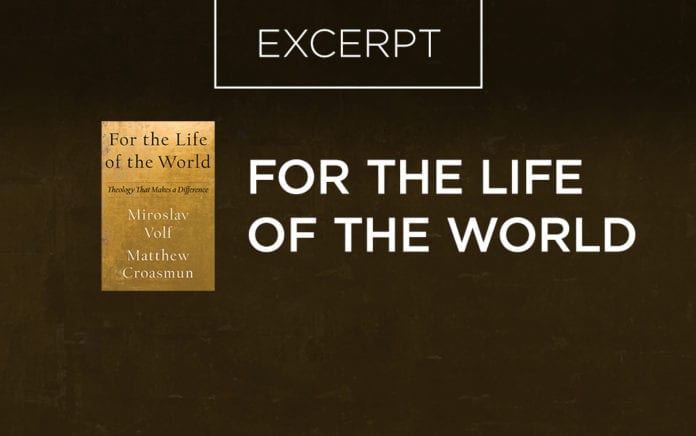 Our theology should inform the way we think about the flourishing life.

If we can no longer count on colleges and universities for help in exploring the flourishing life, one might think that religious communities—churches, synagogues, mosques and temples—would center their activities and explorations on this question. We are not qualified to speak for religions other than Christianity, so we’ll limit ourselves to discussing what happens in ecclesial communities. Churches often take up this question—witness the popularity of Rick Warren’s The Purpose-Driven Life. But it is increasingly common to employ the Christian faith primarily as a set of “skills” resources—to manage a life whose course is preset by the demands of success in education and work and by cultural habits formed around leisure and entertainment.

In our private lives, we have a morning coffee, exercise a bit and stretch, and, if we are pious, we have a moment for a devotional reading from the Bible or Oswald Chambers, and off we go to do things whose place in the flourishing life we have never considered in light of our professed faith. Sunday worship services are too frequently no more than a communal version of such energy-boosting, performance-enhancing or get-well morning exercises. Many churches, of course, do much better, and to the extent they do, they are important schools of the flourishing life.

In two traditional sites of sustained reflection on the flourishing life—the institutions of higher learning and the houses of worship—interest in exploration of the most important question of human existence is waning. This in itself constitutes a cultural crisis of major proportions, partly because it underpins or exacerbates many other crises. Many have sensed the resulting cultural vacuum and attempted to fill it. Important philosophers have taken up the issue of the “true life,” sometimes with the goal of rescuing it from religious captivity and bringing it back to philosophy and to the center of university concerns. Psychologists have done the same, especially those associated with positive psychology, though often with a problematic conflation of scientific knowledge and moral judgment. Religious thinkers from diverse religious traditions wrestle with the issue as well, of course, though often with little awareness of the changed conditions under which the question of flourishing life presents itself to people today. But all this is bucking the trend. Much work remains to reverse it.

A Challenge for Theology

We need to revive a sustained truth-seeking cultural conversation about the flourishing life. We live in a globalized world where partly overlapping and partly contradictory visions of flourishing life coexist in the same public space. People of many diverse perspectives, religious and nonreligious, will need to participate in that conversation. Christian theology ought to become one such voice. If it does, it may be able to help both religious and educational institutions to make the true life their central concern.

Along with philosophy in its ancient mode, for centuries Christian theology served the West as the intellectual space for articulating visions of the flourishing life and sorting out contested questions of value. The great church father Augustine placed the problem of the “happy life” at the heart of his theology. In one way or another, all great theologians did the same. With conceptualities appropriate to their contexts, they echoed the orientation of the Christian faith itself toward “the kingdom of God,” “life abundant,” “new creation,” “seeing God,” the “new Jerusalem,” or—as we argue in chapter 3—toward the establishment of “God’s home among humans.” Today, too, theology has an indispensable contribution to make in countering taste-driven, individualized, unreflective ways of living and helping people articulate, embrace and pursue a compelling vision of flourishing life for themselves and all creation.

Theology has a contribution to make, and theology must make that contribution if it is to remain true to its purpose, which is the same as the goal of Jesus’s mission. One way to see this mission is to look at what Jesus rejected during his temptations immediately before embarking on his mission. The first temptation was the most fundamental. “Turn these stones into bread,” the tempter taunted Jesus, who was famished after a forty-day fast in the wilderness. Jesus resisted, responding, “One does not live by bread alone, but by every word that comes from the mouth of God” (Matt. 4:4).

Jesus is quoting the Hebrew Bible here. These words came first to the children of Israel as a summary of the main lesson they were to have learned in the course of their forty years of wandering in the wilderness before entering the promised land. Bread was what they needed in the wilderness. That much was never in doubt; that truth, as insistent as a growling stomach, they didn’t need to learn.

But they needed more than “bread,” and that truth, not as obvious as physical hunger but as real as the possibility of missing their human purpose, they did need to learn. All humans do, perhaps especially we moderns. We have made our greatest temptation into the chief goal of our lives and the main purpose of our major institutions: to create and enjoy ever more sophisticated varieties of “bread.”

Living by bread alone, we fail our humanity. When our theology does not provide us with a compelling alternative vision of the good life, it betrays its purpose. This is the tragedy of academic theology today: At the moment when theology’s tools are most needed to answer the most pressing question of our lives and to serve the common good, they are found stacked in a corner, dusty and neglected—even or especially by those charged with keeping them sharp. Theology is in crisis, largely because it has lost its nerve and forgotten its purpose to help discern, articulate and commend compelling visions of flourishing life in light of God’s self-revelation in Jesus Christ.

Excerpted from For the Life of the World by Miroslav Volf and Matthew Croasmun, ©2019. Used by permission of Baker Publishing BakerPublishingGroup.com.