Home Resources Books The Danger of Culture Devoid of Religion 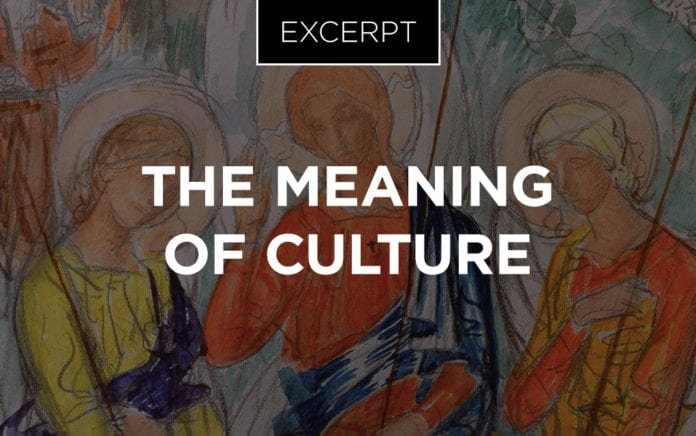 Culture cannot sustain itself without a religious framework. Studying the poet Matthew Arnold helps us understand why.

Excerpted From
The Orthodox Reality
By Vigen Guroian

T.S. Eliot once said that Matthew Arnold “set up culture in the place of religion, and … [left] religion to be laid waste by the anarchy of feeling.” Eliot’s comment prompts one to consider whether Arnold, the quintessential Victorian, was also the prototypical modern who, unable to muster belief in the God of Christian orthodoxy, embraced culture as a substitute for religion.

And this question can certainly prompt further reflection on the meaning of culture and how Christians, especially, ought to be disposed toward it.

We are here concerned with the latter question, that of the meaning of culture and how Christians ought to comport themselves toward it. Nonetheless, it is helpful to start with the special case of Matthew Arnold. Even if Eliot was right to suggest that Arnold substituted culture and duty to it in place of religion, the great Victorian remained sufficiently sympathetic to the spirit of historic Christianity that his vision of culture was neither atheistic nor thoroughly secularist. And if this is so—and I believe it is—then Arnold may also be viewed as a transitional figure from whom we can learn a lot about the late modern context of our topic.

In his day, Arnold was eminent among a company of critics who believed high culture cannot be accounted for apart from a stable historical religion and a shared religious piety. Indeed, he worried that a contemporary spirit of thoughtless experimentation and frivolous innovation was shifting into a crass new barbarism. He writes, “The danger now is, not that people should obstinately refuse to allow anything but their old routine to pass for reason and the will of God, but either that they should allow some novelty or other to pass for these too easily, or else that they should underrate the importance of them altogether, and think it enough to follow action for its own sake, without troubling themselves to make reason and the will of God prevail therein.”

Arnold had caught the scent of a rising new secularism and a practical atheism, both driven by a utilitarian spirit that the people’s passions fueled.

In this respect, Eliot may have unfairly accused Arnold of opening the gates to “ananarchy of feeling.”

I believe that Arnold does not so much “set up culture in the place of religion” as overstate the case for it. This is because he collapses religion into culture. He is a fish who swims and breathes in the brackish waters of late Christendom. He values biblical religion in anthropological terms as educative, inspirational and supportive of culture. “Religion [is] the greatest and most important of the efforts by which the human race has manifested its impulse to perfect itself,” he opines. “Religion comes to a conclusion identical with that which culture, culture seeking the determination of this question [of the nature of perfection and how to achieve it] … reaches.” Culture, in its pursuit of this perfection, includes pursuits of “art, science, poetry, philosophy, history, as well of religion [itself].” Arnold concludes that the present time “is the moment for culture to be of service, culture which believes in making reason and the will of God prevail, believes in perfection, [and] is the study and pursuit of perfection.”

Eliot vigorously objects to such formulations. Art, literature and poetry may well convey religious ideas and sentiments. They, however, are not a substitute for, or the equivalent of, faith and dogma, ecclesiastical authority and corporate worship of God. Religion is concerned with a transcendent and supernatural reality and is not a subset of culture. It is, rather, the source of culture. “Man is man because he can recognize supernatural realities, not because he can invent them,” Eliot argues in his criticism of the New Humanism, represented by Irving Babbitt, his former teacher at Harvard, that had gained attention and stirred controversy in the 1920s and 1930s. “Either everything in man can be traced as a development from below, or something must come from above,” Eliot insists. “There is no avoiding that dilemma: You must either be a naturalist or a supernaturalist.” Not by its own power or on the basis of naturalism or mere humanism can culture rescue or repair a fraying and disintegrating civilization, or hold at bay an emerging, dehumanized mass society, the “Wasteland” of Eliot’s poetry.

The Arnoldian claim that culture is our guide to perfection is a dangerous pursuit. Seeking perfection by and through culture is at minimum a path to grave disappointment, Eliot warns. It may even bring down the gloomy curtain of nihilism, when disappointment sours into disillusionment or despair. Nevertheless, the inverse of Arnold’s proposal that religion, rather than culture, is a means to perfection in this world is just as false. In “The Idea of a Christian Society,” Eliot outright rejects the use of the Christian faith as an instrument of social progress. “And what is worst of all is to advocate Christianity, not because it is true, but because it might be beneficial. … To justify Christianity because it provides a foundation of morality, instead of showing the necessity of Christian morality from the truth of Christianity, is a very dangerous inversion.”

From Outreach Magazine  Why Christianity Must Be Both Personal and Public

Many in Arnold’s generation who no longer believed in the biblical God nonetheless continued to be sympathetic to Christianity’s cultural legacy. They welcomed and found comfort in Arnold’s analysis. His vision supported the easy Victorian and the increasingly less confident Edwardian assumption that Western culture could carry all the valuable Christian truths about human nature and human possibilities without faith in the biblical God or subscription to formal religion.

Important late nineteenth- and early twentieth-century theologians and religious philosophers sought to correct this assumption. They maintained that culture grows from the religious cult. “Culture is the development of the religious cult, of its differentiation and the unfolding of its content,” argues Russian religious philosopher Nicholas Berdyaev. When the cult’s vitality diminishes, the culture becomes exhausted, turns brittle and hollows out; although after the well of faith has dried up, there still might persist for a time a pragmatic and instrumental use of religion.

Excerpted from The Orthodox Reality by Vigen Guroian, ©2018. Used by permission of Baker Publishing BakerPublishingGroup.com.